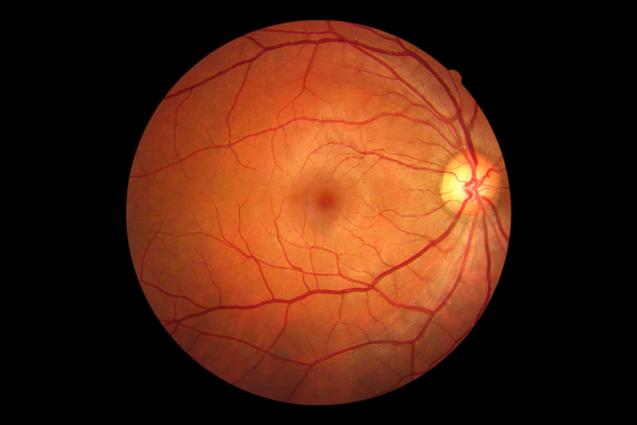 
Lawrence Livermore National Laboratory engineers are developing a microelectrode array for a multi-laboratory DOE project to construct an artificial retina or "epiretinal prosthesis." The three-year DOE project brings together national labs, universities and a private company, with Oak Ridge serving as the lead laboratory.

An epiretinal prosthesis could restore vision to millions of people suffering from eye diseases such as retinitis pigmentosa, macular degeneration or those who are legally blind due to the loss of photoreceptor function. In many cases, the neural cells to which the photoreceptors are connected remain functional.

Project leader Dr. Mark Humayun, of the University of Southern California, has shown that electrical stimulation of the viable retinal cells can result in visual perception. These findings have sparked a worldwide effort to develop a retinal prosthesis device.

Expertise in biomedical microsystems at Lawrence Livermore’s Center for Microtechnology is being tapped to develop a "flexible microelectrode array," able to conform to the curved shape of the retina, without damaging the delicate retinal tissue, and to integrate electronics developed by North Carolina State University. The device will serve as the interface between an electronic imaging system and the human eye, directly stimulating neurons via thin film conducting traces and electroplated electrodes.

Lab engineers have pioneered the use of poly(dimethylsiloxane), a form of silicone rubber simply called PDMS, in fabricating hybrid integrated microsystems for biomedical applications. In particular, the Lab has worked on "metalization" — applying metals for electronics and electrodes to PDMS for implant devices.

"It’s our important contribution to this project," Krulevitch said. "We’ve developed a technique for fabricating metal lines that can be stretched. This is really critical for a flexible device designed to conform to the shape of the retina."

The electronic array must be robust enough to withstand damage from the implant procedure and be biocompatible — able to withstand the physiological conditions in the eye. Another reason for using PDMS is that silicone rubber is not only flexible, but is a promising material from a biocompatibility standpoint.

Humayun’s group implanted three first-generation LLNL devices in a dog’s eye to identify needed design and fabrication improvements. Livermore engineers are now working on a second-generation microelectrode array with smaller electrodes in greater numbers, and developing techniques to integrate the electrodes with electronics chips. The array’s perimeter — 4 mm across — has been reinforced with micromolded ribs to facilitate handling and prevent curling or folding. The current version of the array is longer for short-term implant experiments. But the final device for implant will measure 4 mm by 4 mm.

Applications for the flexible electrode array go beyond the retinal prosthesis, according to Krulevitch, who says it has the potential to allow development of next-generation medical implant devices such as the "cochlear implant" for hearing. The technology could one day be used for "deep brain stimulation devices" for treating such diseases as Parkinson’s, and spinal cord stimulation devices for treatment of chronic pain.

For more information on the overall DOE Artificial Retina project, check the Web at: http://www.energy.gov/HQPress/releases02/novpr/pr02248.htm

Laboratory news releases and photos are also available electronically on the World Wide Web of the Internet at URL http://www.llnl.gov/PAO and on UC Newswire.