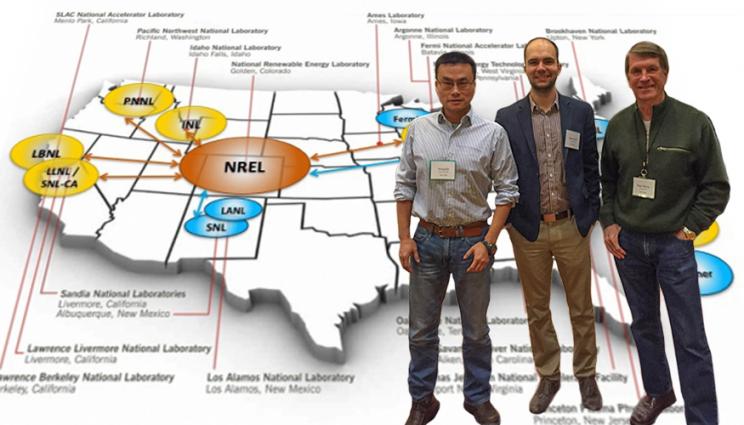 The members of LLNL’s LabCorps team include (from left) Yining Qin, an energy systems staff scientist; Edward Silva, the entrepreneurial lead, who has worked for the Child Family Institute for Innovation and Entrepreneurship, affiliated with the UC Davis Business School; and Roger Werne, the deputy director for the Lab’s Industrial Partnerships Office and the industry mentor on LLNL’s team.

Two technologies developed by LLNL and Sandia/California researchers who participated in the Department of Energy’s (DOE) LabCorps program are moving toward commercialization.

Under the LabCorps program, the LLNL and Sandia scientists were members of teams that included an entrepreneurial lead and an industry mentor, and advanced the technologies in 2015.

"The purpose of the LabCorps program is to improve the business acumen of national laboratory scientists and engineers in an effort to improve the overall technology transfer success rates," said Roger Werne, the deputy director for the Lab’s Industrial Partnerships Office (IPO) and the industry mentor on LLNL’s three-person team.

"The focus of the six-week effort was to develop a business model concept and perform customer discovery. During the six weeks, the teams had to contact and interview 100 potential customers," Werne noted.

About half of the national lab teams that participated in the LabCorps program have chosen to go forward with their technologies, including the LLNL and Sandia projects, which could advance through startup companies, Werne said.

In addition to Werne, the LLNL team included principal investigator Yining Qin and Edward Silva, the entrepreneurial lead, who has worked for the Child Family Institute for Innovation and Entrepreneurship, affiliated with the UC Davis Business School.

"Through the LabCorps program, I discovered things I had never learned in my training as a scientist," Qin said. "This has transformed my thinking to make my research customer focused. You learn how to find and communicate with real customers and you receive feedback that transforms your work."

Silva indicated that he is giving strong consideration to building a startup company around the C-BEST technology.

"I think that the technology holds great promise and I became really excited when we began talking with customers. I learned that while there are a lot of technologies that claim to do similar things, most customers don’t necessarily have a solution that works for them," Silva said.

In Silva’s view, the LabCorps program is excellent. "When you talk with customers and combine that with a technology that has a high potential for impact, it creates a situation that is unmatched in most educational experiences."

Werne echoed Silva’s perspective, noting that any scientist, engineer or entrepreneur who participates in the customer discovery process learns much.

"When people discover you’re from a national lab, they’re more than willing to spend time with you. Once you start, you learn the answers to questions you didn’t even know existed — and that’s what’s enlightening about the process."

"Business is far more sophisticated than scientists generally believe. The scientists and engineers who participated in the LabCorps program now believe business is a real profession."

Craig Smith, the business program lead for the Sandia/California team, noted that Sandia’s team is planning to license its technology, but also is open to partnerships and other collaborations.

The Sandia team’s technology focuses on TwistAct, an electrical component for next-generation wind turbines that would operate without a gear box, rare-earth elements or sliding electrical contacts, Smith said.

"The TwistAct team discovered a wide breadth of opportunities, ranging from suppliers, vendors and manufacturers to large, integrated companies for wind generators," according to Smith.

Funded through DOE’s Energy Efficiency and Renewable Energy Office, the LabCorps program synthesizes seminars, classes and entrepreneurial mentorship to train researchers in business planning and delivering new technologies to the marketplace. Its aim is "to speed the transfer of innovative, clean energy technologies from its national laboratories into the commercial marketplace."

The teaching team for the most recent national LabCorps program was led by Presley and Jim Kiles, Bay Area investors who serve on the LLNL IPO Industry Advisory Board.