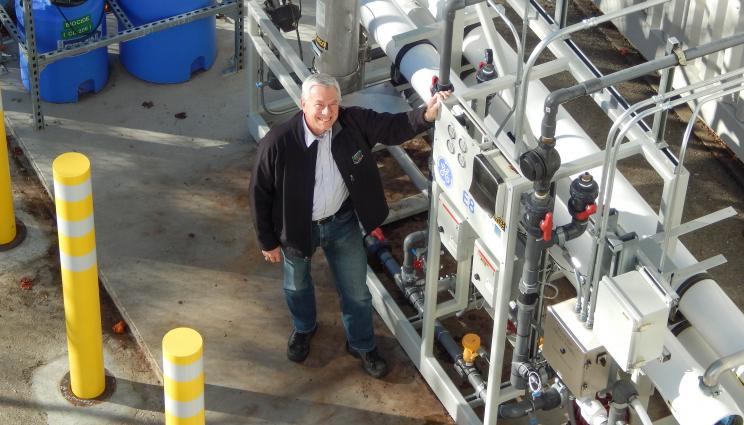 LLNL Sustainability Manager Michael Cowen, next to a reverse osmosis unit that recycles water for a Lab cooling tower, says the Lab's sensitivity to the state's drought led to some changes, including cutbacks of more than 10 percent of its normal water use.

Green might be the color of a beautifully landscaped campus. But at Lawrence Livermore National Laboratory (LLNL), gold is the color of success.

Since embarking on an ambitious plan this year to conserve water across the board, the Lab saved more than 10 percent of the 240 million gallons of water it consumes annually. That includes letting turf return to California’s natural golden color, using reverse osmosis units to recycle water for cooling towers and fixing leaky pipes. 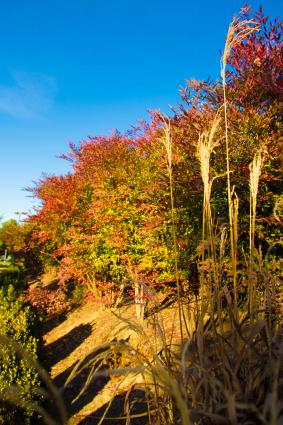 "We are sensitive to California’s historic drought conditions, so we made some impactful changes," LLNL Sustainability Manager Michael Cowen said.

Lawrence Livermore’s efforts were recently recognized by the National Nuclear Security Administration (NNSA), which selected the Lab for one of its Sustainability Awards for innovation and excellence. NNSA gives 15 Sustainability Awards each year to its national labs and sites to recognize exemplary individual and team performance in advancing sustainability objectives through innovative and effective programs and projects that increase energy, water and fleet efficiency and reduce greenhouse gases, pollution and waste.

The Lab won for its water conservation plan, which employs a multi-faceted approach to water conservation in drought-stricken California, according to NNSA. LLNL was recognized under the Sustainability Awards’ Environmental Stewardship Awards’ water category.

"I congratulate the winners of this year’s Sustainability Awards and all those involved in our efforts to implement environmentally responsible and sustainable operations and projects," said Department of Energy Undersecretary for Nuclear Security and NNSA Administrator Lt. Gen. Frank G. Klotz.

The award recipients were selected by a panel of judges from NNSA headquarters and sites who reviewed and scored 24 nominations submitted in 12 of the 15 award categories. The 15 sustainability awards comprise five Best in Class and 10 Environmental Stewardship awards.

"The award recognizes our team effort and a well-conceived water conservation plan that looks at every aspect of water use and required everyone at the Lab to come together to make it happen – from scientists working on computers to gardeners raking the leaves," said Mark Martinez, principal associate director of LLNL’s Operations and Business Directorate.

The plan examined best approaches for conservation in the Lab’s three main areas of water use: cooling towers that use 45 percent of the water; domestic (sinks, toilets and process water) that use 30 percent; and irrigation that uses 25 percent.

The Lab has five cooling towers at the main site that are used to cool equipment and research facilities such as the Livermore Computing Center, which houses some of the world’s fastest high-performance computers. Cooling towers circulate cool water to facility heat exchangers or condensers to absorb heat. That water is then returned to the cooling tower to release the heat through evaporation.

"The supercomputers use an incredible amount of electricity, which is converted into heat," Cowen said. "You need a lot of water to cool the system to allow the computers to function."

Because the cooling towers consume 100 million gallons of water a year, the Lab launched a pilot program to use a reverse osmosis unit to remove dissolved solids in treatment water, so it can be used by the cooling tower that supports Bldg. 132. The treated water was used in lieu of potable water from the Hetch-Hetchy Reservoir, which reduced annual water usage by 3.8 million gallons, a 50 percent reduction in the first year of operation. The goal is to eventually produce 100 percent of that cooling tower’s water from the reverse osmosis unit and build more units for the other cooling towers.

"If we could outfit all five cooling towers with reverse osmosis units and reuse our treatment water, we have the capacity to save 100 million gallons of water per year," said Cowen, noting that water from the reverse osmosis unit is cleaner than Hetch-Hetchy water. "Our strategy is to start small, find out the details of performance optimization and scale it up for all the cooling towers."

In the area of domestic use, half of the water is used for sinks, toilets, showers and water fountains, while the other half is used for processes such as cleaning the optics for the National Ignition Facility. Low-flow toilets and reduced-flow sink aerators are replacing their water-wasting predecessors. However, the biggest problem is water being wasted through leaky pipes and sprinkler systems. Finding and fixing them is an important goal of the Lab’s water conservation plan.

"Potable water was leaking into the low-conductivity water system (that provides ultra pure water to research labs) making the system less effective because of added ions," Cowen said. "By fixing this and other leaks, the Lab saved 2.7 million gallons this year. Leaks wastes water and damage infrastructure. We are counting on our employees to help us find and fix them."

Landscaping normally requires up to 60 million gallons of water annually to keep the grass green and nourish plants and trees. However, the Lab’s water conservation plan was able to cut 17.5 million gallons from the total this year by reducing patches of turf (the highest water user) and allowing the land to turn gold, which reduced irrigation Labwide. The plan also replaced landscaping with water-wise plants that require less water. Sustainable landscaping is a long-term program with installations of water-wise plants and trees near the Central Café, West Gate Badge Office and Bldg. 361.

"The idea is to maintain an aesthetically pleasing appearance while using less water," said Cowen, adding that the Lab’s water conservation plan is here to stay. "This is a way of life for the Lab to respond to the current drought as well as being a responsible steward of our natural resources." 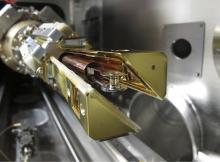 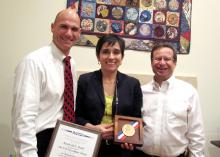 Lab physicist honored for work at Department of Energy headquarters