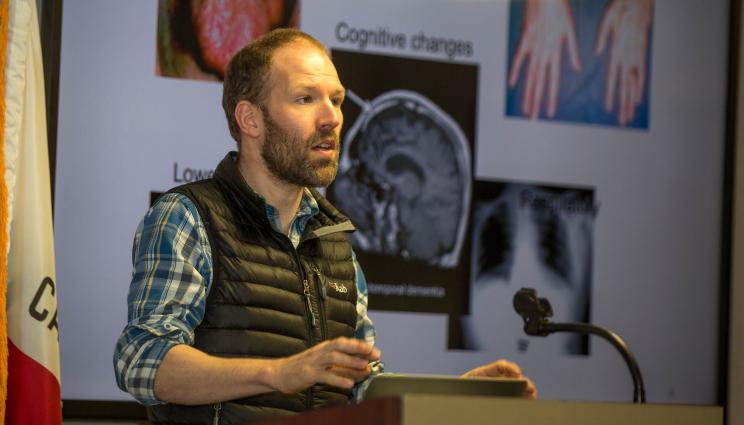 Johnathan Cooper-Knock, an ALS researcher and clinician at the Sheffield Institute of Translational Neuroscience and a professor at the University of Sheffield, spoke March 12 on computational biology approaches toward developing ALS biomarkers at the Livermore Valley Open Campus. Photos by Julie Russell/LLNL

But for two of those employees, Innovation and Partnerships Office (IPO) Deputy Director Roger Werne and computer scientist Mike Piscotty, the conference stirs strong emotions because of brain-related impacts on their family members. 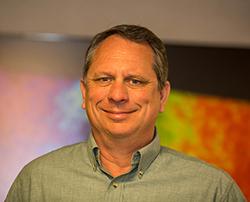 Werne’s oldest daughter, Lisa, suffered horrific facial pain for two years because of a nerve condition that surgery cured. And less than a year ago, Piscotty’s wife of 33 years, Gretchen, passed away from amyotrophic lateral sclerosis (ALS).

"The Lab has been doing terrific work in brain research technology," Werne said. "This is our chance to come out of the shadows."

LLNL’s involvement in the World Congress for the SBMT started last year when Babak Kateb, former president of the SBMT, contacted the Federal Laboratory Consortium because he wanted to see the national labs involved in brain mapping research.

Kateb was placed in contact with Werne, who then delivered an overview about what LLNL was doing in brain research at the 2018 World Congress annual conference. "At the time, I told him about my daughter’s problem."

His daughter, Lisa Kendall, now 49 and living in San Diego, had suddenly started suffering piercing and almost continual face pain, diagnosed as trigeminal neuralgia, two years earlier. In the case of Kendall, a former Bay Area News Group reporter, her trigeminal nerve had grown together with an artery in her brain.

Over time, doctors diagnosed her condition, but they offered no solution other than drugs.

"After talking with Dr. Kateb, he told me, ‘I know all about this condition and I can recommend a neurosurgeon at Cedars-Sinai Hospital in Beverly Hills who might be able to fix it,’" Werne said.

Kendall received an MRI and then she underwent a three-hour surgery at Cedars-Sinai Hospital on Sept. 13. She has essentially been pain-free since then.

Reflecting on the serendipitous circumstances that led him, in the course of his daily job at the Lab, to discover the cure for his daughter’s condition, Werne grew a little misty and said, "Somebody up there likes the Werne family."

In late 2017, in a gracious action, Piscotty’s son, Stephen, was traded by the St. Louis Cardinals baseball team to the Oakland A’s, so that he could be near and care for his mother, Gretchen, who was then suffering with ALS, or Lou Gehrig’s disease. She passed away in May 2018.

In January, Kateb visited LLNL and after meeting Mike Piscotty, told him he was struggling to secure ALS speakers and representatives to participate with the SBMT. Kateb then asked him to organize a panel session on ALS biomarker development for this year’s congress.

Piscotty, who with his son Stephen has created an organization called ALS CURE that he says has a laser-focused goal of curing ALS, readily agreed. ALS CURE is raising funds to explore a partnership with the Livermore Lab Foundation to engage LLNL in multidisciplinary research on ALS.

Piscotty calls Kateb’s approach to combatting ALS "strategic," explaining that the founding chairman of the board of SBMT and the Brain Mapping Foundation favors a multidisciplinary problem-solving approach to ALS.

Using a computational biology approach, ALS CURE and LLNL hope to find prognostic and diagnostic ALS biomarkers and develop an ALS disease model, which would be pivotal information that could then be provided to pharmaceutical companies to develop a cure.

"I’m trying to get us to a cure as soon as possible," said Piscotty, who works in Computation’s Enterprise Application Services Division. "Our biggest obstacle to reach the cure is not having the ALS biomarkers.

"I’m really excited about our panel. Our topic is developing ALS biomarkers and I’m going to provide an overview for the session. There are all kinds of diagnostic tests for other diseases — for multiple sclerosis, Parkinson’s disease, lyme disease, AIDS, heavy metals — but we don’t have those tests for ALS."

Through his organizational work for the conference, Piscotty noted that he has been able to create a virtual research community for ALS. "Our aim is to develop the biomarkers for ALS and share them with the research community."

Nearly 1,000 world leading neurosurgeons, neurologists, neuroscientists, psychiatrists and engineers will gather for the SBMT this weekend at the LA Convention Center. This prestigious gathering is a meeting of neuroscience pioneers and neurotech investors who are advancing the latest discoveries and research for brain and spine health.