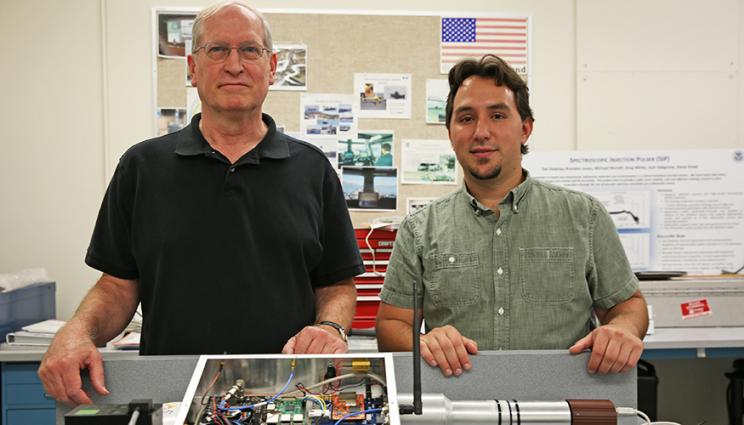 Lab technologies continue to protect the nation against explosives, radiological and nuclear terrorism

Editor's note: The following is part of a series of articles looking back at the Lab's response immediately following the Sept. 11 attacks and our contributions since that day 20 years ago.

As part of its mission to make the world a safer place through science and technology, Lawrence Livermore National Laboratory (LLNL) works to help the nation prevent and mitigate catastrophic incidents arising from biological, chemical, radiological, nuclear or explosive materials. Since the attacks on the nation on Sept. 11, 2001, the Lab has continued to provide expertise in threat and risk assessment, detection of threat materials, understanding and mitigating the consequences of attacks and forensic analysis.

While the Lab had a long history in supporting national security prior to 9/11, the events of that day added a new emphasis. In response, existing capabilities were expanded and strengthened and new efforts in research and develop began, resulting in 13 related R&D 100 Awards since 9/11.

LLNL: A leader in anticipating threats

Steve Kreek, formerly the nuclear detection and countermeasure research program leader at LLNL and recently returned from Washington, D.C., after serving as a science adviser to the deputy administrator for NNSA’s Defense Nuclear Nonproliferation, said LLNL has been a leader in anticipating various types of possible threats. This includes developing frameworks for communicating threats to decision makers and developing sets of signatures for the range of nuclear/radiological weapons of mass destruction.

“Shortly after 9/11, LLNL helped pilot operational use of radiation detection systems for city protection,” including with the New York Port Authority, he said, which was a multi-year effort with law enforcement directly involved. “The work was conducted at airports, tunnels and bridges as a multi-lab project for which LLNL was lead for the airports.”

Since then, LLNL has worked on better quantifying anticipated performance of operational detection systems and formalized methods to assess deployed radiation detection systems against those threats. This includes performing system threat reviews (now system performance evaluations) for the Department of Homeland Security (DHS).

Leveraging that experience, Kreek said LLNL continues to improve performance of deployed systems and substantially reduce the frequency of false and nuisance alarms encountered in cargo screening. A project, dubbed ERNIE (Enhanced Rad/Nuc Inspection & Evaluation), has helped dramatically reduce impact on border agents and allowed them to focus on other tasks.

To support training of emergency responders that might encounter a radiological/nuclear weapon of mass destruction (WMD) threat or have to respond in the aftermath, LLNL has developed advanced methods for increasing the realism of training against WMD threats. Two projects include RaFTS, which was an R&D100 winner and is now commercially licensed, and TARANTULA, a virtual reality simulator, are potential game changers that will dramatically increase the realism of exercises.

LLNL also has been instrumental in nuclear forensics, emergency response and methods to reduce/eliminate the threat of lost/stolen radiological or nuclear materials by supporting programs such as NNSA’s Global Material Security. LLNL’s Harry Martz and his team have been researching and developing limited-view and angle-computed tomography methods to obtain 3D images inside WMD threats.

Kreek said LLNL literally wrote the book on nuclear forensics and how to employ a variety of analytical methods to forensic characterization. “We continue to develop rapid methods to speed analysis and interpretation in support of real nuclear material seizure cases or in the aftermath of a detonation,” he said.

Steve Payne, who works with technical staff to conduct R&D in radiation detectors, said that after 9/11, the Domestic Nuclear Detection Office in DHS, along with NNSA, decided to increase funding for discovery and development of improved radiation detector materials.

“This provided LLNL an opportunity to form a skilled interdisciplinary team of chemists, nuclear scientists, engineers and software experts focused on developing new detector materials and demonstrating them in prototype detectors. Multiple materials deemed impossible were discovered and implemented into devices meeting mission-driven specifications,” he said.

The nature of materials work is such that, following the discovery phase, many years of development toward real-world implementation demand creativity, teamwork and persistence. The team also innovates in areas such as signal read-out with algorithms and in performance analysis.

One such device, UltraSpec, is a high-precision gamma and neutron radiation detector that can distinguish threat sources of nuclear materials from legitimate sources, such as medical isotopes, and naturally occurring background radiation. UltraSpec helps government agencies ensure the safety of stored nuclear material at nuclear power plants, weapons stockpiles and waste facilities. Another technology, the Sonoma Persistent Surveillance System, is a broad-area motion imagery system for real-time surveillance at high resolution. Sonoma’s sensors and software can track up to 8,000 moving objects in an area the size of a small city.

For more than two decades, LLNL has supported the U.S. government in explosives detection. This work has covered a wide range of activities. In the mid-1990s, Martz was appointed to a National Academy of Science committee on aviation security. Martz and a team also worked with the Federal Aviation Administration on better understanding the X-ray signatures of explosives and false alarm items as well as characterization of explosives.

“Efforts then and to this day include help on intelligence to determine what needs to be detected and simulation and modeling of blast effects to aircraft to determine how much explosive is required to take down an aircraft,” Martz said.

This effort in collaboration with LANL and Sandia National Laboratories has led to a better understanding of the risks to aircraft and thus the amount of explosive that needs to be detected. NCI and HEAF have teamed together in this effort. The work LLNL and DHS Transportation Security Lab and Tyndall Reactive Materials Group perform led to the DHS TSA detection standard that all deployed aviation systems need to meet.

With numerous capabilities designed to detect, mitigate or prevent terrorist attacks on the nation, LLNL is poised to continue its important work protecting the country.