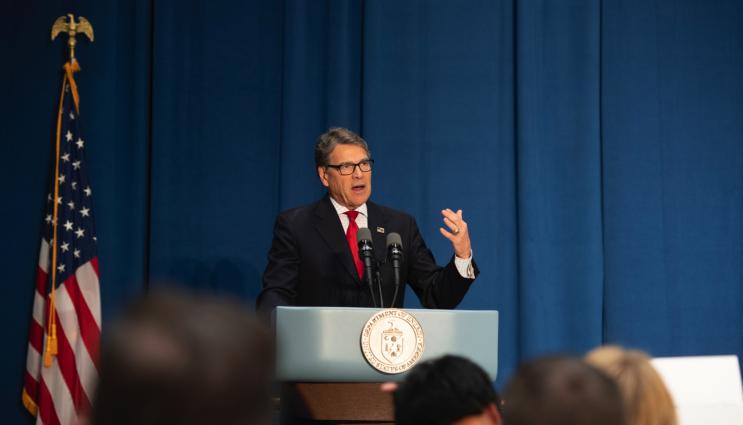 Former Secretary of Energy Rick Perry recognized Lawrence Livermore National Laboratory (LLNL) staff with six Secretary’s Honor Awards at a ceremony at Department of Energy (DOE) headquarters. The Secretary’s Honor Awards are bestowed on teams that have achieved a singular accomplishment that demonstrates a high level of performance and dedication to public service. As his last address to DOE employees, Secretary Perry also thanked all DOE employees for their hard work and commitment to DOE’s mission. 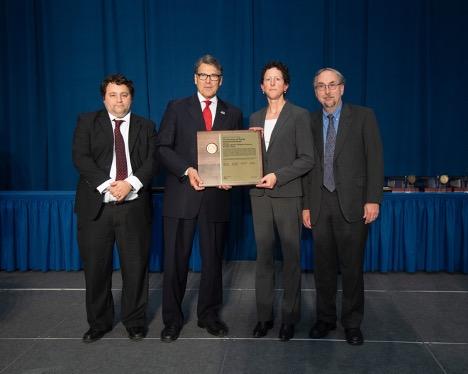 The Foreign Nuclear Weapon Program Analysis Team, a group of 10 LLNL researchers, was cited for contributing to a technically challenging, high-priority intelligence community assessment. The award citation noted that, “their expert analytic inputs and extraordinary dedication to an intensive and complete interagency coordination process resulted in an assessment that effectively examines and explains complex technical subjects…advancing the U.S. government's understanding of a growing foreign nuclear threat and its implications for the Department of Energy and national security policy.”

“We’re grateful to the Department of Energy for recognizing the contribution of our multidisciplinary team to a U.S. national strategic priority and are honored that LLNL nominated us for this award,” team member Jennifer Swenson said. “My colleagues exemplify the qualities required to successfully meet the challenges of the Lab’s mission: dedication, technical rigor and the ability to create unique approaches to solving time-sensitive problems. The team continues to work collaboratively with our external partners to provide timely, analytic and technical support to inform policymaker decisions on this national security priority.” 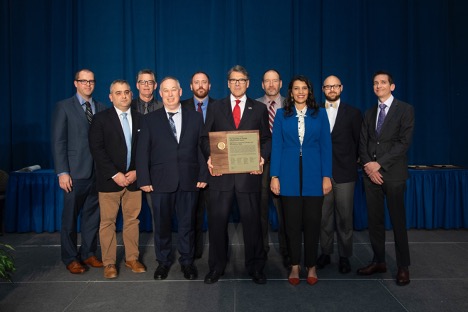 Livermore’s 34-member High-Value Component Design and Manufacture Team received an award for, “their extraordinary efforts in which they successfully invented advanced materials, manufacturing and metrology technologies that have pushed the boundaries of what is possible and transformed the way our national security enterprise thinks about design, manufacturing and qualification for similar components. Faced with a challenging national security need, the team overcame long odds and an aggressive schedule to invent, design, manufacture, inspect and deliver a new high-value component both on schedule and on budget.”

“This award is recognition of the unbelievable innovation and creativity that results from bringing together a diverse yet cohesive team in pursuit of shared purpose — it’s something that only happens in places like Lawrence Livermore,” team member Eric Duoss said. “The recognition also speaks to our team’s ability to face innumerable and seemingly insurmountable obstacles, both technical and otherwise, and overcome them through a combination of determination, discovery and invention. It’s incredibly rewarding to contribute to LLNL’s mission and strengthen our nation’s security while advancing the frontier of scientific and engineering understanding. I thank everyone at LLNL and elsewhere who helped make this achievement possible.”

Team member Denis Richard added: “This award recognizes an exceptional effort that exemplifies the historical LLNL way of tightly integrating world-class subject matter experts and technical personnel within the weapon design process. In doing so, the honored team is enabling the insertion into the U.S. stockpile of technical solutions that strengthen our national nuclear deterrent. Beyond the remarkable technical achievements, this award is a recognition of the spirit of collaboration and partnership that has and will continue to make us successful in our mission to deliver security to the nation.” 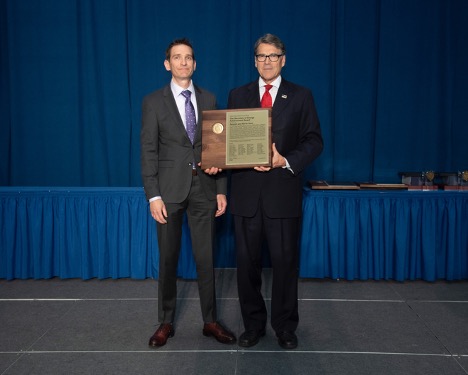 The Summit Sierra team, consisting of 45 staff at Lawrence Livermore and Oak Ridge national laboratories and the Livermore Field Office, received a Secretary’s Achievement Award for delivering Summit at Oak Ridge National Laboratory and Sierra at LLNL, the two fastest computers in the world according the Top500 benchmark. The successful deployment and use of these computers are a culmination of a multi-year effort and partnership between the labs and the vendors IBM, NVIDIA and Mellanox. The citation notes that, “the Summit and Sierra procurements…are delivering breakthrough insights in science and national security. They have transformed the international landscape in high performance computing, and they will influence the modernization of future generations of computing throughout the Department of Energy complex.”

“Building and operating a scientific instrument that provides capabilities on the scale of Sierra requires tremendous effort,” team member Bronis de Supinski said. “We are honored that the secretary has recognized the teamwork and partnership that is enabling unprecedented simulations in support of the ASC program.” 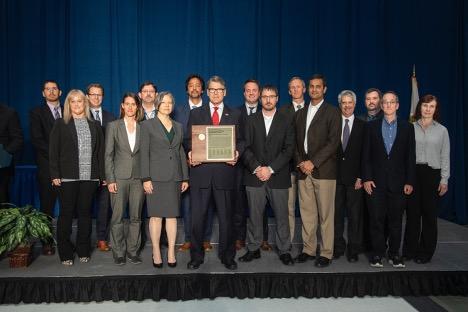 The Warhead Measurement Campaign was a collaborative effort involving staff from Global Security and Weapons and Complex Integration organizations at Lawrence Livermore, Los Alamos, Oak Ridge and Sandia national laboratories and NNSA’s Pantex production facility. The objective was to obtain a standardized set of radiation signature data from U.S. stockpile weapons to support treaty verification and emergency response studies as well as other nuclear nonproliferation and defense program needs. The project also included a modeling effort to evaluate current capability for prediction of radiation signatures. The citation noted, “this dataset is currently being sought out to support efforts in ways that were not necessarily anticipated in the original conception. This would not have been possible without the initiative, dedication and extraordinary caliber of the multi-institution team.”

“It was nice to be recognized for all the hard work that was put into the WMC,” team member Leslie Nakae said. “It was really rewarding to have worked on the multi-cross-lab project and to have collaborated with all different laboratories, as well as the diverse organizations across the various labs and for it to have had it all come together for the successful conclusion. We have acquired some unique high-quality data that we can mine and use for benchmarking simulation codes well into the future. I would also like to say that it has fostered some cross-laboratory collaborations that are currently ongoing and hopefully will extend into the future.” 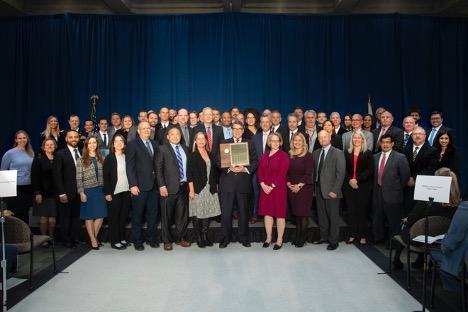 This award is In recognition of the outstanding contributions of the Democratic People’s Republic of Korea (DPRK) Denuclearization Team that has planned for the final, fully verified denuclearization of the Korean peninsula. The team’s efforts played a major role in preparing for the historic U.S.–DPRK Summit in Singapore, as well as the follow-on Summit in Hanoi, Vietnam. Furthermore the team’s tremendous cooperation, ability to quickly adapt to changing circumstances and requirements and dedication to the mission at hand have ensured that the United States is expertly prepared to undertake a major effort to directly improve the security of the United States and the entire international community.

“It was a real honor to be recognized for the enormous effort in planning and preparation,” team member Daniel Decman said. “For more than a year, we developed plans and processes and integrated our capabilities, equipment and expertise across the labs toward one goal, denuclearization. It was a real privilege to work with such a diverse set of people from so many different parts of the complex.” 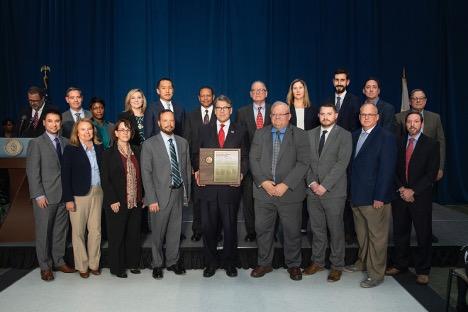 The Pit Production Analysis Team provided outstanding effort in support of re-establishing the Nation's Plutonium Pit Production. On May 10, 2018, the NNSA administrator provided a recommended alternative to revitalize the United States' defense plutonium production capabilities and achieve the Department of Defense's requirement to produce no fewer than 80 pits per year by 2030. The team's work resulted in one of the most significant NNSA policy decisions in nearly a decade -- identifying viable sites for the production of plutonium pits to ensure the future sustainment of the nuclear weapons stockpile. Their exceptional collaboration across the nuclear security enterprise in developing an analysis of alternatives, engineering assessment and workforce analysis was an integral achievement and is the basis of this policy decision.

LLNL members of the team include: Mark Bronson, Kyle Kondrat and Stephen Stout.