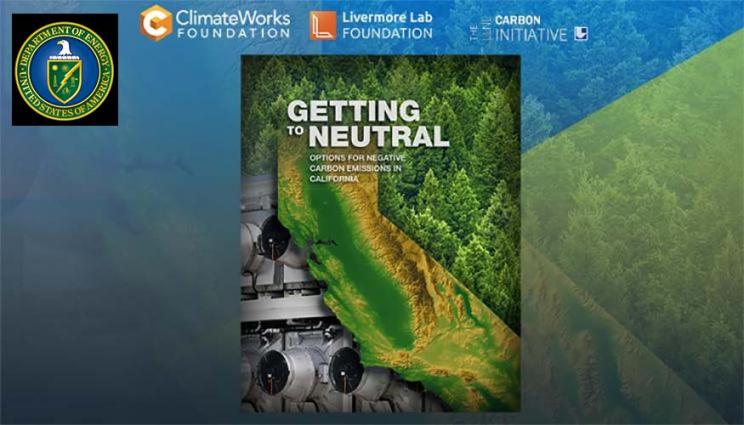 Lawrence Livermore National Laboratory‘s (LLNL) "Getting to Neutral" Carbon Emissions Team has earned a Department of Energy (DOE) Secretary Achievement Award for its groundbreaking work on how California could reach the goal of becoming carbon neutral by 2045.

“It has been a long-standing tradition to recognize the recipients of these awards at an annual ceremony in Washington, D.C.,” Secretary Dan Brouillette said. “Although we are not able to hold an awards ceremony at this time, it is important that we recognize and celebrate these notable accomplishments."

In the groundbreaking study, “Getting to Neutral: Options for Negative Carbon Emissions in California,” LLNL scientists identified a robust suite of technologies to help California clear the last hurdle and become carbon neutral – and ultimately carbon negative – by 2045.

The study was conducted as part of LLNL’s expansive energy programs work and the Laboratory’s Carbon Initiative. The goal of the initiative is to identify solutions to enable global-scale CO2 removal from the atmosphere and hit global temperature targets.

The report details a thorough assessment of the advanced carbon reduction technologies now available and their costs, as well as the trade-offs necessary to reach the state’s decarbonization goal. The report codifies a number of significant conclusions by researchers at eight institutions. It serves as a resource for policymakers, government, academia and industry.

California executive order B-55-18 mandates that the state achieve carbon neutrality by 2045 and maintain net negative emissions thereafter. Achieving this goal would complete a chain of other ambitious statewide targets for reducing greenhouse gas emissions. The LLNL study finds that not only is carbon neutrality possible, but that California can once again be a global climate leader by demonstrating how to remove significant amounts of CO2 from the atmosphere.