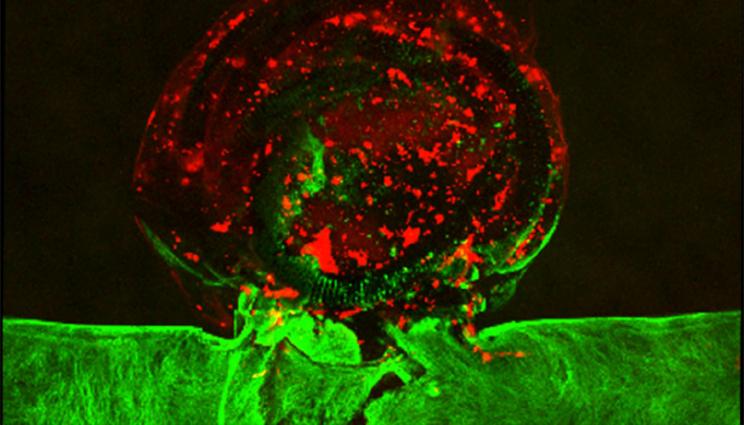 Using 3D printing, an LLNL team replicated an aneurysm in vitro and performed an endovascular repair procedure on the printed aneurysm, inserting a catheter into the blood vessel and tightly packing platinum coils inside the aneurysm sac. The team introduced blood plasma into the aneurysm and observed a blood clot form where the coils were located. The green areas depict the endothelial cells and the red indicates the formed clot. Photo by Elisa Wasson.

Brain aneurysms affect about one in every 50 Americans and can lead to serious medical emergencies, including stroke, brain damage and death if they burst. Existing treatment options are limited and often invasive, and surgical outcomes can vary widely from person to person.

But medical practitioners may be able to improve existing treatment methods and develop new personalized ones, thanks to researchers at Lawrence Livermore National Laboratory (LLNL) and their outside collaborators. The team, which includes scientists at Duke University and Texas A&M, has become the first to produce a living, bioprinted aneurysm outside of the human body, perform a medical procedure on it and observe it respond and heal as it would in an actual human brain.

As described in the journal Biofabrication, an LLNL team led by engineers William “Rick” Hynes and Monica Moya were able to replicate an aneurysm in vitro by 3D printing blood vessels with human cerebral cells. Hynes performed an endovascular repair procedure on the printed aneurysm — inserting a catheter into the blood vessel and tightly packing platinum coils inside the aneurysm sac. After the packing treatment, the researchers introduced blood plasma into the aneurysm and observed the formation of a blood clot where the coils were located, cutting it off from fluid flow. The researchers also were able to observe the “post-op” healing process of the endothelial cells within the vessels.

LLNL scientists said the platform, when combined with computer modeling, represents a significant step to developing patient-specific care for aneurysms based on an individual’s blood vessel geometry, blood pressure and other factors, and could help overcome one of biomedical engineering’s biggest hurdles — the time it takes for new surgical techniques and technologies to leap from the laboratory to the clinic.

“While there are a lot of promising treatment options, some still have a long way to go,” said Moya, the project’s principal investigator. “Animal models aren’t necessarily the best way to try out these options, as they lack direct observation of treatment effects and have uncontrollable aneurysm geometries. Having this robust, human in vitro testing platform could help facilitate new treatments. If we can replicate aneurysms as much as we need to with these devices, we might help accelerate some of these products into the clinic and essentially provide patients with better treatment options.”

Caused by a weakening in the artery walls, cerebral aneurysms are characterized by a “ballooning” or bulging of a blood vessel in the brain and can be potentially fatal if they rupture. One common treatment is surgical “clipping” — attaching a metal clip to the base of the aneurysm to redirect blood flow away and keep it from bursting. The procedure is highly invasive, requiring surgeons to open up the skull and expose the brain. In some cases, such as when the aneurysm is located in inaccessible regions within the brain, the treatment isn’t even an option.

A more common and less invasive treatment is the endovascular metal coiling approach, where a surgeon feeds a thin metal catheter — inserted into an artery in the groin — up through the body and into the aneurysm, packing it with coils or stents and causing it to clot. The endothelium lining the blood vessel grows over the clotted plug, walling the aneurysm off from the rest of the vasculature. The downside to “coiling” is that success is highly dependent on a variety of factors, including the geometry of the patient’s blood vessels, which differ from one person to the next, researchers said.

To take some of the guesswork out of aneurysm treatments, Hynes, the original principal investigator who proposed the project, realized researchers would need a way to validate more predictive 3D models that take patient geometry into account. Bioprinting with human cells, Hynes said, allows researchers to create biologically relevant experimental models of aneurysm interventions that are identical to the computer models, in order to validate them accurately and easily.

“We looked at the problem and thought that if we could pair computational modeling and experimental approaches, maybe we could come up with a more deterministic method of treating aneurysms or selecting treatments that could best serve the patient,” said Hynes, who led the project for its first year. “Now we can start to build the framework of a personalized model that a surgical practitioner could use to determine the best method for treating an aneurysm.”

Hynes said LLNL is taking a “three-pronged approach,” teaming with former LLNL scientist Duncan Maitland — who leads a biomedical engineering group at Texas A&M and also heads a company that develops an experimental shape memory coil for treating aneurysms — and Amanda Randles, a former Lab computational scientist and current Duke University assistant professor who developed a code for simulating blood flow, called HARVEY. Using the device, Lab researchers were able to validate Randles’ flow dynamics model, verifying results that would be observed in the real world. At low flow rates, researchers saw little movement of blood into the aneurysm, whereas an increased flow rate, such as occurs when a person is agitated or nervous, resulted in a circular flow of blood throughout the aneurysm, as would be expected in a true brain aneurysm.

To create the bioprinted aneurysm, Hynes and the team started by printing the vessel geometry with a “sacrificial” ink, surrounded by a protein-based hydrogel. They cooled the system to dissolve the ink, leaving the vasculature shape behind. Then they introduced human brain endothelial cells, which coated the channels, forming the actual blood vessels and aneurysm. Hynes performed the coiling procedure with a microcatheter and platinum coils, believed to be the first surgical intervention ever performed on an artificial living tissue. Eight days after the procedure, the researchers observed the endothelium beginning to heal itself.

By combining the 3D-printed platform with computational models, researchers said they’ve developed a potential tool for surgeons to pre-select the best coil types needed to fully pack an aneurysm to result in the best treatment outcome, and perform “test runs” of procedures before attempting them on the human patient.

“Essentially a clinician could literally look at somebody’s brain scan, run it through the modeling software, and the software could show the fluid dynamics prior to treatment,” Hynes said. “It also should be able to simulate that treatment and allow the practitioner to narrow down to a certain type of coil or packing volume to ensure the best possible outcome.”

Most computational models of aneurysms are validated by inducing animals with aneurysms and performing surgery on them. Animal models are imperfect, researchers explained, because it’s difficult to gather data on them, and their vessel geometries aren’t reproducible. Scientists also use non-biological devices, such as 3D-printed silicone tubes, where vessel geometry can be controlled, but the results may not reflect human biology.

Unlike animal models, LLNL’s platform allows scientists to directly measure the fluid dynamics inside the vessels and aneurysm while maintaining biological relevance, the best of all worlds for validating a computer model, researchers said.

“This is an ideal platform for an in silico model because we can make these flow measurements that would be incredibly difficult to make if you were doing this in an animal,” Moya said. “What’s exciting is that this platform mimics blood vessel compliance and the mechanical stiffness of brain tissue. It’s also robust enough to handle a coiling procedure. You’re seeing the vessel distend and move, but it’s able to withstand the procedure — very much like you would in vivo. This makes it ideal to be used as a training platform for surgeons or as an in vitro testing system for embolization devices.”

In addition to patient-specific care and serving as a testbed for surgical training, researchers said the platform has potential for improving the understanding of basic biology and the post-surgery healing response.

While early results are promising, the researchers cautioned there’s a long way to go before the platform sees application in the clinical environment. The team’s next step is to combine a two-dimensional blood-clotting model developed by LLNL computational engineer and paper co-author Jason Ortega with Randles’ 3D fluid dynamics model, to simulate how blood clots form in response to the coils in three dimensions. They aim to compare the traditional bare coils with the experimental shape memory polymer coils developed by Maitland that are designed to expand inside the aneurysm to promote better clotting and enhance patient outcomes.