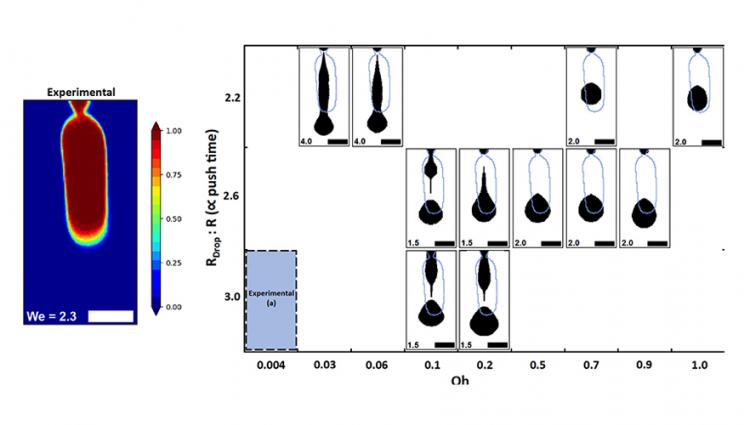 In the paper, the team describes the simulating of metal droplets during LMJ, a novel process in which molten droplets of liquid metal are jetted from a nozzle to 3D print a part in layers. The process does not require lasers or metal powder and is more similar to inkjet printing techniques.

Using the model, researchers studied the primary breakup dynamics of the metal droplets, essential to improving the understanding of LMJ. LMJ has advantages over powder-based approaches in that it provides a wider material set and does not require production or handling of potentially hazardous powders, researchers said. The journal Physics of Fluids published the study on Nov. 25, where it was chosen as an Editor’s Pick.

“We don’t currently have a good understanding of all of the physics that occur right when the droplet breaks off from the metal jet,” said co-author Andy Pascall. “This model points to additional physical mechanisms that might need to be considered to close the gap between experiments and modeling."

To conduct the research, the team built a custom, liquid-metal printer capable of dispensing tin droplets. Combined with high-speed video, the printer served as an experimental test-bed for free-form, droplet-on-demand printing and allowed the team to track detailed droplet dynamics during the ejection process.

The video analysis enabled researchers to build a computational model to simulate the morphology of the metal droplets during ejection, revealing that the drops behave like an extruded “pill” with no tail formation.

The study demonstrates that while LMJ is highly stable and repeatable, it also is extremely challenging to model. In the future, the team plans to explore droplet ejection across a broader range of process parameters and seek greater understanding of the factors impacting droplet shape, breakup and satellite formation, including thermal effects, wettability and the role of surface oxides.