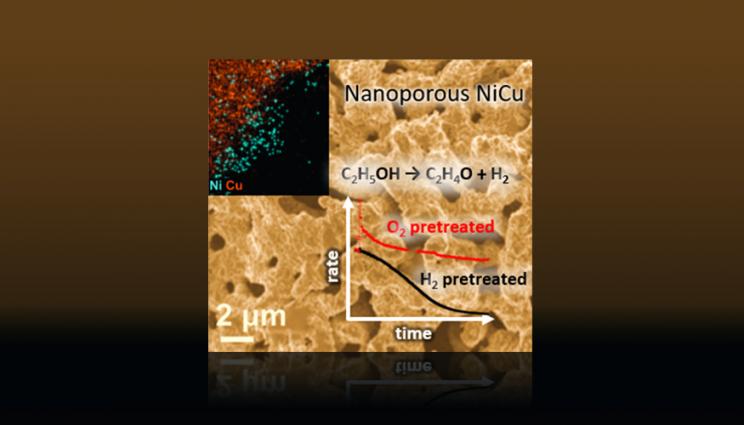 Lab steps on the gas to enhance chemical production

To optimize catalyst performance, a team of scientists from Lawrence Livermore National Laboratory (LLNL) and collaborators has developed a detailed understanding of the effect of pretreatment-induced nanoscale structural and compositional changes on catalyst activity and long-term stability.

The research could make the production of the important industrial feedstock chemical acetaldehyde more efficient.

Improvements in the energy efficiency of chemical production is needed to meet global energy challenges. Heterogeneous catalysis using nanomaterials have the potential for substantially increasing efficiency through enhancement of reaction selectivity and decreasing the operating temperature for high-volume processes. Nanomaterials also may enable new catalytic processes that improve efficiency by eliminating the need for separation of byproducts, such as water.

The production of the acetaldehyde is a good example of the need to improve the energy efficiency of chemical transformations. Acetaldehyde is a starting material for several industrial chemicals.

The current process to produce acetaldehyde is the oxidative dehydrogenation of ethanol catalyzed by silver, which requires high temperature and separation of the byproduct, water.

But the LLNL team and collaborators found a way to stabilize nickel (Ni)-doped copper (Cu) catalysts that enable direct catalytic non-oxidative dehydrogenation of ethanol toward acetaldehyde and hydrogen, a clean fuel.

Scientists are interested in catalysts composed of Ni and Cu because of their use in many catalytic and electrocatalytic applications (including carbon dioxide reduction). They also are abundant and relatively inexpensive.

Using in situ and ex situ X-ray photoelectron spectroscopy and various electron microscopy techniques, the team found that the catalytic activity and stability of a nanoporous (np) NiCu alloy catalyst can be improved by generating a kinetically trapped Ni subsurface state through an oxygen pretreatment.

Exposure of the oxidized surface to ethanol at reaction temperature reduces the CuO surface while most of the Ni remains oxidized and embedded in the Cu. In this state, Ni doping provides stable (more than 60 hours) and improved activity for catalytic dehydrogenation of ethanol to acetaldehyde and hydrogen.

“This study emphasizes the importance of understanding the dynamic changes of catalytic surfaces triggered by exposure to reactive gases as a tool to tune material properties and improve their performance, with implications extending to electrocatalysis, photocatalysis, materials science, metal-based biological applications and beyond,” Biener said.

The research is part of the Integrated Mesoscale Architectures for Sustainable Catalysis, an Energy Frontier Research Center funded by the Department of Energy, Office of Science.