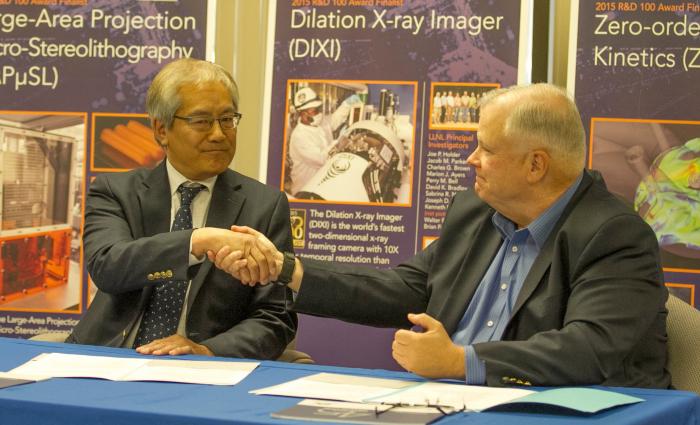 The agreement enables both parties to tap into resources to help develop minority-owned businesses. The San Francisco MBDA Business Center (SFMBDA) is one of 44 such centers across the country operated on behalf of MBDA, an agency within the U.S. Department of Commerce.

The agreement signed with Lawrence Livermore enables business transactions to occur between the Lab and the center. It is the second such agreement between the two organizations, following on the initial one signed in 2014.

"This agreement memorializes our common goal of increasing minority entrepreneurship within our innovation economy here in California and throughout the United States," Chan said. "Federal laboratory research and development is vital to our remaining a cutting-edge and competitive economy."

Rich Rankin, director of LLNL’s Industrial Partnerships Office, said the partnership allows LLNL to tap into SFMBDA’s network of minority-owned businesses and entrepreneurs who could be interested in commercializing Lab technology.

"I think the long-term vision would be one of close collaboration between the two organizations and to provide our scientists and engineers with the opportunity to work with minority entrepreneurs," Rankin said. Among LLNL’s core top technologies are life sciences, medical instruments, energy, radiation detectors, information technology, lasers and optics, materials and advanced manufacturing, Rankin said, noting that LLNL normally files about 150 invention disclosures per year and normally has about 1,500 patents in force.

According to U.S. Census data, there are more than 65,000 minority technology companies employing more than 500,000 people in the U.S. and abroad, said Lamar Heystek, SFMBDA director, in comments after the meeting.

"These firms have the potential to bring scientific discoveries to the marketplace by utilizing federal R&D at labs such as Lawrence Livermore," Heystek added. "Leveraging the diversity of our know-how is key to our country’s continued global competitiveness."