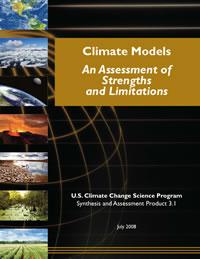 Using some of the most powerful supercomputers in the world, scientists apply mathematical models of Earth’s climate to examine hypotheses about past and present-day climates. The climate simulations along with improved observations are merged into coherent projections of future climate change.

David Bader, leader of the Lab's Program for Climate Model Diagnosis and Intercomparison (PCMDI), is the report's coordinating lead author. Atmospheric scientist Curt Covey was one of six additional authors.

"Climate and earth system models are tools that provide insights and knowledge into how future climate may evolve," Bader said. "It’s important for us to understand where current models stand and where they may need to be improved."

This report makes an important contribution in helping to describe and explain the current state of high-end climate modeling for the non-specialist.

The report assesses the models’ ability to reproduce observed climate features, and their sensitivity to changes in conditions such as atmospheric concentrations of carbon dioxide. The report notes that climate modeling has gotten better with time because of finer spatial resolution, the inclusion of a greater number of physical processes, and through comparison to a rapidly expanding range of observations.

It assesses how well models simulate the recent observational period; it does not deal with climate change predictions.

Modern climate models are comprised of four major components: atmosphere, ocean, land surface and sea ice. Development of each of these individual components raises important questions as to how key physical processes are represented in models.

The three U.S. modeling groups that contributed to the 2007 Intergovernmental Panel on Climate Change (IPCC) Scientific Assessment of Climate Change (IPCC 2007) serve as examples in this report. These models successfully simulate a growing set of climate processes and phenomena, but improvements are necessary to refine the understanding of recent climate change.

"Experience and expert judgment are essential in constructing and evaluating a climate modeling system, so multiple modeling approaches are needed for full scientific evaluation of the state of the science," Bader said. "We tried to provide information that was complementary to that found in the IPCC Working Group I Report by focusing on the three U.S. models."

On Thursday, July 31, Bader along with Bill Brennan, acting director of the U.S. Climate Change Science Program, Anjuli Bamzai, coordinator of the report, Bill Gutowski, lead author, and Ron Miller, another lead author, participated in a telephone news conference to discuss the report.

The report documents the improvement in climate model fidelity over the past decade. As emphasized by the IPCC, modern models simulate continental to global-scale temperature patterns and trends observed during the 20th century.

Despite this progress, a number of systematic biases across the set of climate models remain, particularly in the simulation of regional precipitation. On smaller geographic scales, when compared against the current climate, the simulated climate varies substantially from model to model. A discussion of metrics that may be used to evaluate model improvement over time is included and concludes that "no current model is superior to others in all respects, but rather different models have differing strengths and weaknesses."

The report also describes "downscaling," which is the use of methodologies to generate higher resolution information from global model results for applications on the regional and local scales. Several downscaling examples such as applications focusing on water resources and surface climate change are illustrated to demonstrate how model results can be applied to a diverse set of problems.

To develop this report, the Department of Energy chartered a federal advisory committee comprised of 29 members drawn from academia, government scientists, and non-profit and for-profit organizations that drafted and oversaw the review of the report in accordance with the CCSP guidelines.

President Bush established CCSP in 2002 to integrate federal research on global environmental change at 13 federal agencies, and to provide the nation with science-based knowledge to manage the risks and opportunities of change in the climate and related environmental systems.