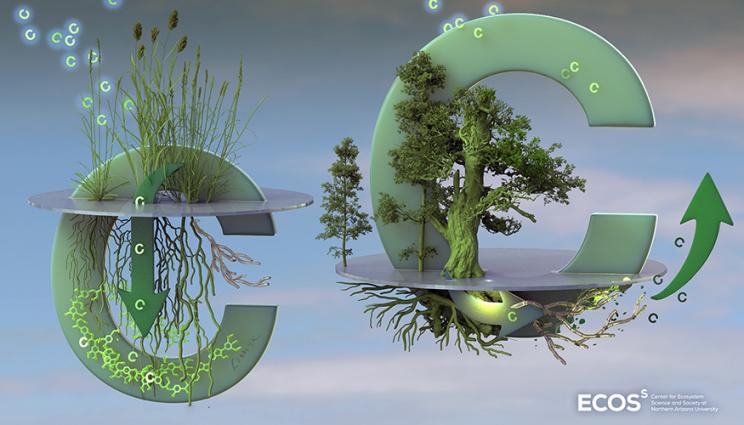 Elevated carbon dioxide emissions from human activities increase the uptake of carbon by plants but may decrease storage in soil.

An international team led by Lawrence Livermore National Laboratory (LLNL) scientists synthesized 108 elevated carbon dioxide (CO2) experiments in various ecosystems to find out how much carbon is absorbed by plants and soil. The research appears in the journal Nature.

The terrestrial biosphere takes up about 30 percent of CO2 emitted by human activities each year. Whether this land carbon sink can be sustained in the future partly depends on the extent to which elevated CO2 (eCO2) may increase carbon storage in plants and soils. While plant growth often increases in eCO2 experiments, individual studies have observed the amount of carbon in the soil can increase, remain unchanged or even decline.

“The variations in soil carbon accrual under elevated atmospheric CO2 remain poorly understood and this contributes to uncertainties in climate projections,” said César Terrer, a LLNL Lawrence Fellow and lead author of the paper. “We needed to take a look at the effect of elevated atmospheric carbon dioxide on plant biomass and carbon pools through a synthesis of real-world experiments and apply state-of-the-art statistical methods to find out what drives variation in soil carbon storage across the world.”

“Ecosystem models don’t accurately reproduce this negative relationship between plant biomass and soil carbon accumulation, which implies that our projections of future soil carbon may need to be revised,” said LLNL scientist and co-author Jennifer Pett-Ridge.

The research was funded by LLNL’s Lawrence Fellow program and the Laboratory Directed Research and Development program.