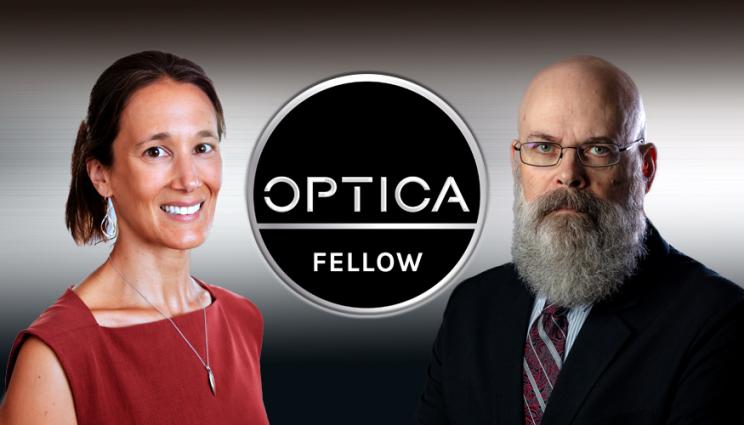 Fellows are selected based on several factors, including distinguished contributions to education, research, engineering, business and serving the optics and photonics community. Click here to see the entire Optica 2023 class.

Albert, a staff scientist in the National Ignition Facility (NIF) and Photon Science directorate, was selected “for pioneering research on the development and applications of X-ray sources driven by laser-wakefield acceleration and leadership in the LaserNetUS initiative.”

“It is a huge honor to be elected along so many of my esteemed colleagues and peers in the optics and laser-science community,” Albert said. “I wouldn’t have achieved this level of recognition without the countless support of many mentors and collaborators, both at the Lab and in our community.”

Albert serves as deputy director for the High Energy Density Sciences Center and for the Jupiter Laser Facility. She recently served as chair of LaserNetUS, a network of 10 high-power laser facilities in North America funded by the Department of Energy’s Fusion Energy Sciences program. Albert works on experimental campaigns for the Lab’s Weapons and Complex Integration projects. She continues to develop applications for laser-driven X-ray sources and serves as mentor for students at the Lab.

Albert had the opportunity to complete a one-year exchange program in the College of Optics and Photonics (CREOL) at the University of Central Florida in 2002 while she was an undergraduate student in France. In that program, she took a laser class and did an internship with then assistant professor Craig Siders. Albert and Siders stayed in close contact and after Siders came to LLNL, he offered her a position as a postdoc at the Lab in 2008, when she worked on developing a gamma-ray source for nuclear resonance fluorescence. After two years, Albert was offered a staff position at LLNL.

“Craig and I are now working on different projects, but we always stay in touch, and I reach out to him quite often for advice,” she said. “There is no better person that I would rather share this with at the Lab than Craig Siders, because he is basically the reason I got into lasers and hired at LLNL.”

Siders, a physicist in the NIF and Photon Science Directorate, was selected “for contributions to the research, application and development of high-intensity lasers in both basic and applied sciences.”

“I feel honored to be recognized by the society for my long and diverse — some would say non-traditional — career in optics and lasers,” Siders said. “Many of my past mentors are fellows, as was the father-in-law Bill Sinton of my older sister. I know in detail their work, which in Bill’s case resulted in an asteroid and a crater on Mars named after him in recognition for his foundational work in infrared astronomy. It’s very humbling to be put in the same category.”

Siders said he is even more honored to have his former student Félicie Albert be named the other LLNL Optica Fellow this year.

“This means a great deal to me,” he said. “I have always felt as a student at Kenyon College and UT Austin, as a professor and faculty at UCF and UCSD, a researcher at LANL and a senior scientist at LLNL that the ST&E process is fundamentally a person-to-person back-and-forth of ideas between equals, where the end is more than what either could do alone. Seeing Félicie progress from a CREOL undergraduate unsure of her abilities, to a confident graduate student, capable LLNL postdoc then full staff has been a real joy and I feel immense pride in her accomplishments and deep gratitude for all wisdom imparted and patience given by my career mentors.”

As a senior scientist, much of Siders’ efforts focus on advisory roles both within and outside the Laboratory, and on nurturing the people and projects that will help guide the safety and security of the nation and her allies.

“This recognition by Optica is a great benefit in this in many ways — it can be door opening, can add weight to advice and assessments made and helps illustrate that the Laboratory really takes a stake in nurturing people with big aspirations of doing impactful things for the nation and the world,” he said.