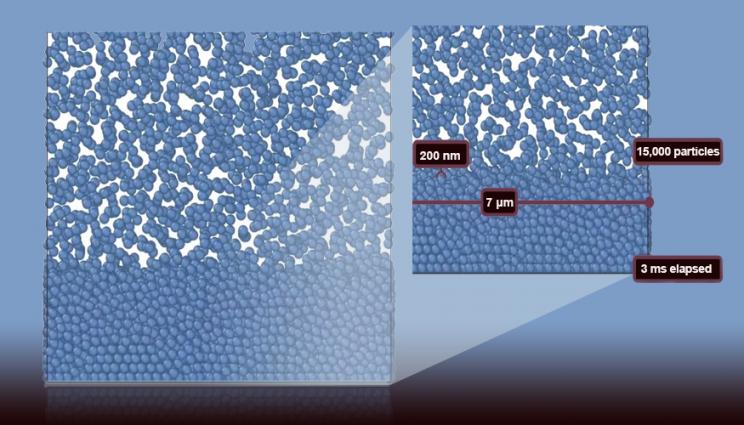 The new electrophoretic deposition model developed at Lawrence Livermore tracks every single particle during the entire EPD process, each particle being roughly the diameter of the smallest bacteria.

Lawrence Livermore National Laboratory (LLNL) researchers have published a precise computer model of a deposition process using electrically charged particles that will provide scientists and engineers with unprecedented insights into the method.

The process of electrophoretic deposition (EPD) uses an electric field to drive colloidal particles suspended in a liquid from a solution onto a conductive substrate. Commonly used to apply paint to cars, EPD also is utilized to coat ceramics, metals and polymers with a range of materials and for 3D printing objects.

Developed using a particle dynamics framework and run on the Vulcan supercomputing system at LLNL, the newly published model tracks every single particle during the entire EPD process — each particle is about 200 nanometers wide, roughly the diameter of the smallest bacteria. The research is published in the Dec. 20 issue of the journal Langmuir.

"This gives us more information than any model before and fresh insights that were previously inaccessible," said the study’s LLNL postdoctoral researcher Brian Giera. "Within this particle dynamics framework we were able to get really detailed information. In terms of understanding the EPD process in detail, this is a first-of-its kind."

Over a period of two years, the team, led by principal investigator Todd Weisgraber, a researcher from LLNL’s Materials Engineering Division, developed the model and ran several dozens of different simulations, changing the strength of the electrical field and the concentration of salt in the system. Not only does the strength of the electrical field affect the development of crystals, Giera said, but salt concentration, surprisingly, also plays a key role. Giera said the model could be used to better understand deposition kinetics, determine how fast to build and anticipate resulting crystallinity, which could impact how armor is produced, and how coatings are applied using the EPD process. 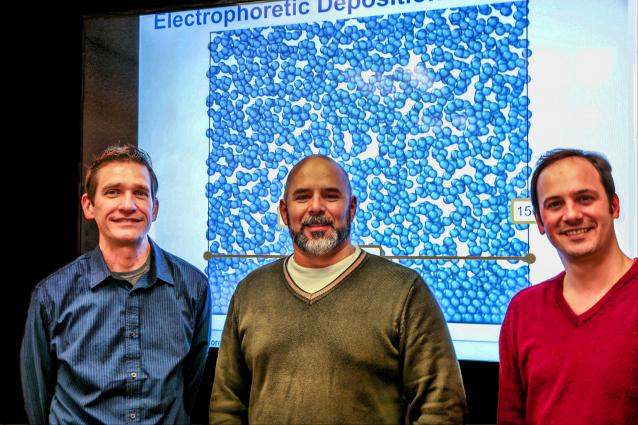 "The model is poised to take on a lot of questions," Giera said. "It gives us more predictive information to optimize the system."

Luis Zepeda-Ruiz, a scientist in the Lab’s Materials Science Division, built the initial model containing all the essential mechanisms before Giera took over the work. He said the model can be augmented to allow for virtually any type of material, extending the science to a broad range of applications.

"Our computational model can access details that are extremely difficult to observe in real experiments," Zepeda-Ruiz said. "It also can be used when experiments fail to reproduce results, when the solution ages and changes its chemistry. Now we have a pure, reproducible means for doing EPD, and that’s a benefit."

The model has been so well received by the scientific community that it was selected to be presented in a keynote speech by Giera at the international Electrophoretic Deposition Conferences Series held in South Korea in October.

LLNL researcher Andy Pascall, an expert in EPD, helped define the model’s initial parameter choices and is working on validating it for future implementation. Pascall said the model will be particularly useful to the field of photonics science, which requires precise control over crystallization.

"Photonic crystallization is interesting to the scientific community in general. The way this has been done before in the lab has been through trial and error," Pascall said. "It’s fair to say this is the only particle-based EPD model out there. Having a model that can be predictive allows you to run hundreds of virtual experiments that would take us months to do in the lab."

Next, Giera will study how the colloidal particles re-suspend and, more importantly, tailor the model to account for particles of different sizes.

The study was part of a process optimization project conducted with funding from the Laboratory Directed Research and Development (LDRD) program. 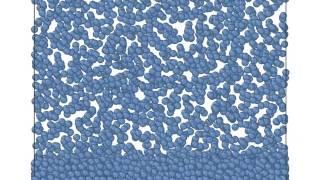