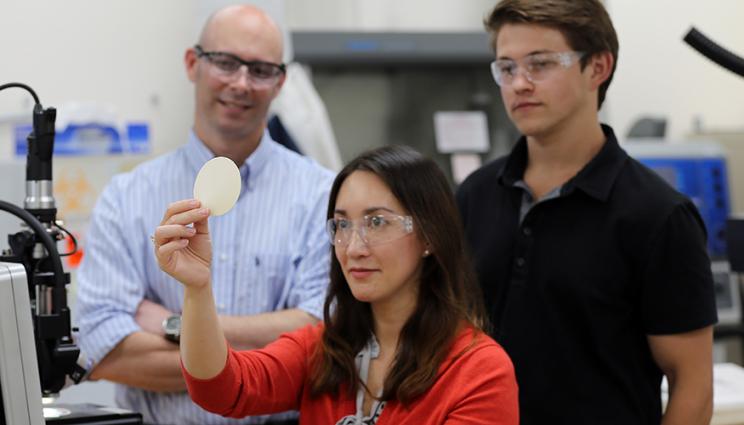 For the first time, Lawrence Livermore National Laboratory (LLNL) researchers have successfully 3D printed composite silicone materials that are flexible, stretchable and possess shape memory behavior, a discovery that could be used to create form-fitting cushioning activated by body heat, such as in a helmet or shoe.

As described in their paper published online by Scientific Reports, by adding hollow, gas-filled "micro-balloons" into silicone-based ink, the researchers engineered the material so it can be compressed or "programmed" at an elevated temperature, remaining in that state as it cools. When reheated, the gas in the micro-balloons expands, causing the structures to return to their original shape. When combined with 3D printing, this shape memory behavior is often referred to as "4D printing," with the fourth dimension being time.

"The impressive part was how well the structures could recover their shape after they were reheated," said LLNL researcher Amanda Wu, the lead author on the paper. "We didn’t see a distorted structure, we saw a fully recovered structure. Because the silicone network is completely crosslinked, it holds the part together, so the structure recovers its original shape in a predictable, repeatable way."

In a stroke of serendipity, the researchers accidently discovered the material while attempting to engineer a hierarchical porous material that would completely recover after being compressed under heat, exhibiting what is known as zero compression set. Instead, they got the opposite result. Undeterred, LLNL scientists Ward Small and co-principal investigator Thomas Wilson wondered what would happen if they reheated the structures, thinking the gas trapped in the material could cause it to re-expand. As it turned out, that’s exactly what happened.

"Initially, this was an accelerated aging test to see if the material would be useful," said Small. "This material took on a pretty large compression set and that made us wonder if it was permanent. We weren’t really thrilled about that, but we had experimented with shape memory in the past and tried to see if it could recover its shape when heated. We tested it and it did."

The key to the shape memory behavior is the polymer micro-balloons that are embedded in the silicone ink. The thin polymeric shell in the micro-balloon has a glass transition temperature; below that temperature, the shell is rigid and glassy and above the temperature, the shell becomes soft and malleable. Therefore, by heating the composite material above the shell glass transition temperature, the spheres’ polymer shells soften, allowing them to be compressed and alter their shape in a way that stays deformed and resists re-expansion of the silicone matrix when cooled. When reheated, the balloons expand, and the restoring force of the heated gas and silicone enables the structure to recover its original contour.

LLNL researcher Taylor Bryson performed the experimental work, mixing inks that could incorporate the micro-balloons but wouldn’t jam the 3D printer’s nozzle, and heating and compressing and cooling the printed samples to set their shape, and then reheating to expand them.

"We’d take them out hot and let them cool in the presence of a compressive force and test their thickness to measure compression set," Bryson said. "Then to see if they’d re-expand, we’d reheat them, put them back in the ovens at the same temperatures or hotter in the absence of a compressive force, and see if they’d recover their shape. Surprisingly, we got close to 100 percent recovery."

The researchers printed their samples using a direct-ink writing process, where the composite ink material was extruded at room temperature from the printer’s nozzle to form woodpile-like structures with controlled porosity and architecture. By being able to 3D print the material, the researchers said, it becomes more lightweight and functional, and they can exert greater control over its overall 3D geometry and composition.

What’s unique about their approach, the researchers said, is that the shape memory component is engineered into the material, so the micro-balloons could be used to integrate shape memory into any polymeric base material, including stretchable materials such as elastomers.

"Historically, shape memory polymers tend to be very rigid," said materials scientist Eric Duoss, a co-principal investigator on the project. "By incorporating micro-balloons into a rubbery matrix, we’ve created a composite that is soft and stretchy, even below the glass transition temperature of the micro-balloons, which is a shape memory material with previously unattainable qualities. It turned out to be very fortuitous."

Lab researchers have filed a patent application for the material. Because it can be 3D printed into an arbitrary net shape and made into a highly porous structure with both open and closed cells, researchers said it might be useful for thermally activated cushioning that is highly tunable and customizable. For example, by modulating the micro-balloon glass transition temperature to be below body temperature, the material could be compressed under heat and cooled, then stored at cooler than body temperature. When worn, it would expand to fit the head in a helmet or a foot in a shoe. In the case where the glass transition temperature is slightly above body temperature, the wearer could heat the material in an oven or pot of warm water, and then fit it, similar to the process of form-fitting a mouth guard.

"You could use this for any customized mechanical energy-absorbing material," Duoss said. "The neat thing is if the wearer grows a little bit and wants to refit the material, they just heat it up to expand it, put it on and let it cool to once again customize the fit. It’s reversible. It’s a completely new material really, and we’re excited about it. It’s a material that should have a lot of commercial potential and should be ripe for technology transfer to industry."

Wu said the process could scale up to produce much larger parts for packaging and transportation applications. In addition, the material wouldn’t necessarily need to be 3D printed. Micro-balloons could be incorporated into any kind of base material and molded or cast, Wu said, but the resulting material might not have the same compressibility as 3D printed porous structures.

Other contributors to the project included LLNL scientists Emily Cheng and Thomas Metz, and Stephanie Schulze of the Department of Energy’s Kansas City National Security Campus. The research was funded by a Laboratory Directed Research and Development (LDRD) project.