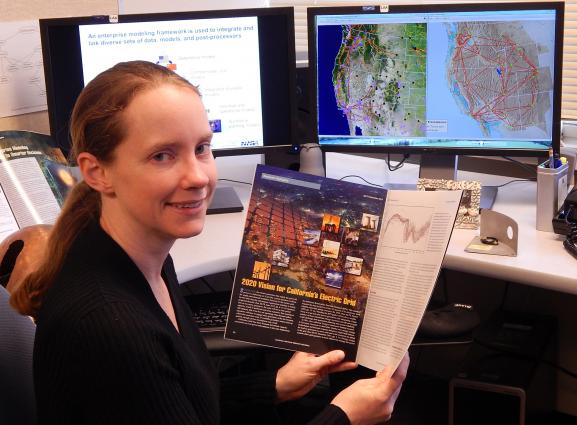 Mathematician and industrial engineer Carol Meyers has been solving real-world problems in areas such as stockpile stewardship and energy-grid planning since joining the Lab eight years ago. Photo by Julie Russell.

What makes Carol Meyers tick is a series of proofs, theorems and complex equations.

The self-described "nerd" has loved mathematics since she was young, and it has helped her succeed as a researcher in Lawrence Livermore National Laboratory's Computational Engineering Division.

The mathematician has been solving real-world problems in areas such as stockpile stewardship and energy-grid planning since joining the Lab eight years ago.

Since then, she has used math to make a big impact in each of those areas.

Meyers is the primary architect of the Stockpile Transformation Optimization Requirements Model (STORM), which is currently used by the National Nuclear Security Administration (NNSA) to evaluate potential courses of action for stockpile planning. She also led an effort to port the PLEXOS power market modeling software to run on high-performance computers, in conjunction with industrial partners.

"There aren't too many places in the country where I can simultaneously be working to modernize the California electric grid while helping refurbish the U.S. nuclear weapons stockpile," Meyers said. "I love that about working at the Lab."

Meyers, who possesses boundless enthusiasm, was probably preparing herself for a career at Lawrence Livermore before she even knew the Lab existed.

"I have a pretty educated family," Meyers said.

Her relatives have had a strong influence on her love affair with math and science, providing tools and encouragement.

"I was the only 7-year-old I knew with a periodic table of elements above my bed," she said. "I would read the elements as I fell asleep. I didn't realize this was unusual until much later in life."

Another person that inspired Meyers to study math was her high school calculus teacher, Joanne Robison. A pioneering woman, Robison had a master's degree and was the school's only female math faculty.

"She taught me that women could do math as well or better than men, and gave me the encouragement I needed to pursue a mathematical career," Meyers said. "I have a history of idolizing smart women in math."

Meyers' love of numbers took her to Pomona College in Claremont, Calif., where she studied pure and applied math. She then went on to graduate school at the Massachusetts Institute of Technology (MIT), where she would earn a Ph.D. in operations research.

MIT not only gave Meyers with a top-notch technical education, but it is also where she met her husband. She married fellow engineering student Mike King, who is now a group leader in LLNL's Defense Technologies Engineering Division.

An MIT career fair connected both Meyers and King to recruiters from Lawrence Livermore, which eventually led to offers of employment for both in the Engineering Directorate. Meyers ended up at the Computation Engineering Division (CED) in 2006.

"Because this is a widely applicable topic, I have worked in a broad range of areas at the Lab, including stockpile stewardship, counterterrorism, energy grid modeling and cybersecurity," she said.

One of her major projects is in the Weapons Complex and Integration (WCI), where she develops optimization models for refurbishment and retiring of weapons in the nuclear stockpile. It requires a deep understanding of the nuclear weapons arena, which has led Meyers to visit all of the sites in the NNSA complex.

Ultimately, this has led to the development of STORM, an enterprise optimization model that allows NNSA to address questions about building, maintaining and dismantling weapon systems based on factors such as the number of weapons, length of their life cycle, their delivery systems, etc.

"We have mathematical ways of analyzing the risks to the NNSA complex," Meyers said.

One of the highlights of her young career was giving a briefing about weapons enterprise optimization tools to retired 4-star Air Force Gen. C. Robert Kehler while he was the commander of the U.S. Strategic Command.

Meyers also briefed Pentagon and NNSA officials numerous times about the topic to secure funding and provide them with information to make important decisions.

"My work helps ensure that NNSA maintains a safer and more secure stockpile while making the best use of available resources," she said. "In working to ensure the security of our stockpile, one can argue that the whole world benefits."

PLEXOS, a product of Energy Exemplar, is an energy market optimization software package that uses cutting-edge mathematical programming techniques in conjunction with detailed energy grid models.  It also features a stochastic optimization component, which Meyers and her LLNL colleagues have used to incorporate scenarios that can impact the energy grid such as weather.

"We wanted to find optimized solutions for all the things that could go wrong," she said.

Her research results showed that commercial energy grid packages could be successfully integrated with HPC to produce dramatic improvements in overall throughput. This work was instrumental in laying the foundations for the California Energy Systems for the 21st Century (CES-21) effort.

"The energy grid modeling research that I've participated in is applicable to electric utilities, independent systems operators and others involved in the modernization of the U.S. grid," Meyers said. "Improved handling of the grid translates into lower costs, particularly with the increased use of renewable resources."

Meyers is currently participating in a collaborative research project that involves the Lab and IBM. Researchers from IBM are using the stochastic optimization models that Meyers and her team developed and investigating schemes to make the models run faster with their industry-standard CPLEX optimization software package.

Having been blessed with many opportunities in life, Meyers likes to give back - particularly by inspiring young women to pursue careers in science, technology, engineering and math (STEM).

She encourages women to create more opportunities for themselves by networking.

"Get out of your shell and network," she said. "It doesn't have to be at a conference or formal networking event. You can network simply by being friendly and making friends."

At Lawrence Livermore, she is the co-leader of the New Moms' support group, which helps mothers balance career and children.

"I needed advice from this group when I had my son," said Meyers, whose son Nate just turned three.

As she looks forward to future, Meyers knows it all began with math.

"I always thought it was fun," Meyers said. "It helped me build a great career."