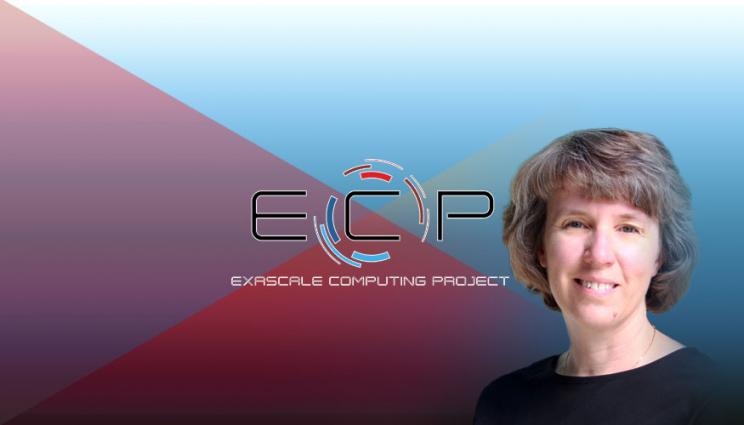 Lori Diachin, deputy associate director for Science and Technology in the Computation Directorate at Lawrence Livermore, has been named deputy director of DOE's Exascale Computing Project.

Her research interests are in the area of numerical analysis and scientific computing software development. In particular, she has worked on optimization-based mesh quality improvement algorithms and their deployment in software tool kits, the development of interoperable meshing and discretization software and interactive access to remote large-scale data.

"Lori has deep technical expertise, years of experience, and a collegial leadership style that qualify her uniquely for the ECP deputy director role," said Bill Goldstein, LLNL director and chairman of the ECP board of directors.

"I have been fortunate to interact and collaborate with Lori for almost two decades and have always been impressed with her talent as an applied mathematician and her ability to work with and lead teams of scientists, engineers, mathematicians and computer scientists," ECP Director Doug Kothe said. "ECP is very fortunate to have an experienced and talented leader such as Lori, whose track record speaks for itself."

The ECP was launched in 2016 as a collaboration between the DOE Office of Science and DOE’s National Nuclear Security Administration to accelerate delivery of a capable exascale computing ecosystem critical to DOE missions in national security, scientific discovery and economic competitiveness. The collaboration includes experts from six core national laboratories – Argonne, Lawrence Berkeley, LLNL, Los Alamos, Oak Ridge and Sandia – along with representatives from industry and academia.

Exascale is the next level of performance for HPC. Today’s petascale systems are measured in quadrillions (1015) of operations per second. Exascale systems will run at quintillions (1018) of operations per second, more realistically simulating the processes involved in applications such as precision medicine, manufacturing, fuels and energy systems and the nation’s stockpile stewardship program, as well as the unseen physics at work within materials and the fundamental forces of the universe. Exascale also holds tremendous potential for emerging disciplines such as large-scale data analytics, machine learning and artificial intelligence.

"Stephen Lee has set a very high bar during his years of serving as the ECP deputy director," Diachin said. "Stephen’s contributions have been extensive, and I’m honored to have been selected for this important role -- important for DOE’s efforts in achieving our goals of a capable exascale computing ecosystem, and important for the U.S. HPC community and our nation’s efforts toward technology leadership. This is an exciting time in computing, and ECP is a marquee project in defining our future. I look forward to working with the very talented ECP team of researchers as we work to make exascale computing a reality in the next few years."

The U.S. Department of Energy’s Exascale Computing Project is responsible for developing the strategy, aligning the resources, and conducting the R&D necessary to achieve the nation’s imperative of delivering exascale computing starting in 2021. ECP’s mission is to ensure all the necessary pieces are in place for the first exascale systems, delivering an ecosystem that includes mission critical applications, software stack, hardware architecture and advanced system engineering and hardware components to enable fully functional, capable exascale computing environments critical to national security, scientific discovery, and a strong U.S. economy. The ECP is a collaborative project of two U.S. Department of Energy organizations, the Office of Science and the National Nuclear Security Administration.