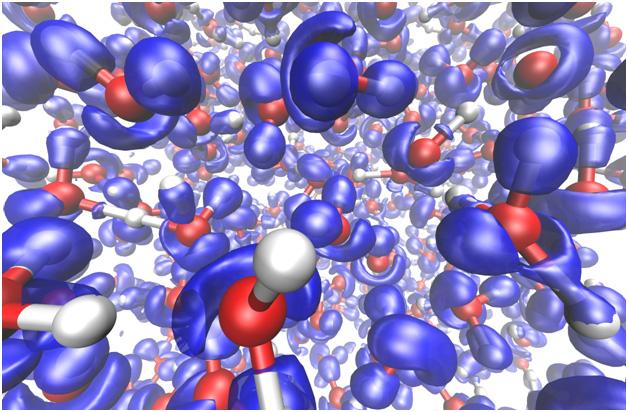 The Electron Localization Function (ELF), in blue, for liquid water at pressures and temperatures typical of the liquid layer in Neptune and Uranus. Ionic conductivity coming mainly from charged hydrogen ions in the dissociating fluid is the source of the electrical current, which in combination with large scale convection, gives rise to a dynamo generating the magnetic field of these planets. The ELF illustrates the distortions of the electronic charge as the molecules dissociate.

Quantum simulations have offered new insight into the microscopic dynamical processes of proton transport and into the interaction of the involved molecular and ionic species. For example, as pressure and temperature in water increases, the dissociation of molecules allows more protons to contribute to the charge transport, which results in a rising conductivity.

In the paper, "Dynamical Screening and Ionic Conductivity in Water from ab initio Simulations," Hamel and co-authors combined density functional theory molecular dynamics simulations with polarization theory to determine the effective time-dependent charge of the different atoms in the fluid, thus solving a long-standing problem that has been an impediment to using QMD to calculate ionic conductivities.

The authors find that large fluctuations in the effective charge of the protons occur on a femtosecond timescale and play a crucial role in charge transport in water. This general approach can now be applied to study the ionic conductivities of electronically insulating materials of arbitrary composition, such as complex molecular mixtures under the extreme conditions deep inside giant planets.

The state-of-the-art calculations required for this effort were carried out under the LLNL Computing Grand Challenge program.