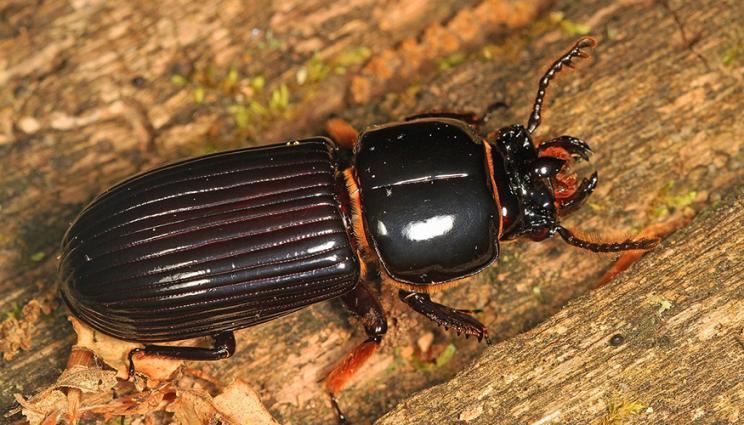 LLNL researchers found that the digestive system of the “horned passalus” beetle (Odontotaenius disjunctus) serves as a mini-reactor for biofuel production. Photo by Judy Gallagher.

When most people think of wood-eating insects, they imagine termites that can destroy a home or business.

However, as part of a Lawrence Livermore National Laboratory (LLNL) bioenergy study, project scientist Jennifer Pett-Ridge and collaborators have learned how the digestive system of a wood-eating beetle serves as a natural mini-reactor for biofuel production.

Led by Javier Ceja-Navarro from Lawrence Berkeley National Laboratory (LBL), the team looked at the microorganisms living within the digestive tract of "horned passalus" beetles (Odontotaenius disjunctus), which live in fallen logs (harvested in Louisiana from fallen pecan tree logs) and are "subsocial" — living in colonies within the wood. These beetles, which are common throughout the Eastern U.S., are responsible for decomposing a huge amount of wood and transforming it into soil organic matter, which contributes to the health and nutrient stock in forest soils. The fact that these beetles can live on food (wood) that is very poor quality — comprised mainly of lignin, cellulose and hemicellulose, with very little nitrogen — is thought to be linked to the capabilities of the bacteria and fungi that reside within their digestive system.

"Understanding how the gut microbiome populations interact to deconstruct lignocellulosic materials to sugars or potential biofuels such as hydrogen and methane could potentially aid in the optimization of industrial cellulosic degradation," said Pett-Ridge, an LLNL biogeochemist and a co-author on a paper appearing in the March 11 edition of the journal Nature Microbiology.

The beetle processes large amounts of woody biomass and have developed symbiotic relationships with gut microbes to survive on a low-nutrient diet. The microbial community in the beetle’s gut provides digestive enzymes that degrade complex polysaccharides and lignin of plant cells. Physically, the gut is highly compartmentalized, resulting in a segmentation of microbial populations and the processes for energy extraction from lignocellulose.

To understand the complex connections that make up the O. disjunctus digestive system, the team defined the environment in which these organisms interact, identified the location of key species and their genomes, and confirmed the metabolic pathways contributing to their efficient metabolism of lignocellulosic material.

Breaking down lignin and cellulose to make fuel (sugars etc.) is chemically very difficult, as is fermenting it into a usable reduced product (like acetate, methane or hydrogen). The beetle can’t do this on its own. It needs a diverse group of bacteria and other microbes in its gut to help. The spatial stratification in the beetle’s gut allows for different microenvironments — some are more acidic, some more anaerobic. Each appears to have a community that sequentially degrades the wood substrates and extracts energy, sharing some products with the beetle host.

"We study them because they are a natural model biorefinery," Pett-Ridge said. "Understanding how evolution has solved the complex lignocellulose to fuel conversation process can help us design better industrial mimics and find novel enzymes or pathways."

Coarse woody debris makes up a tremendous amount of biomass in forest ecosystems. As a result, several insect groups have evolved to take advantage of this abundant resource, forming specialized wood-feeding guilds. Among the most prominent groups of insects that have specialized in this manner are termites and specific groups of beetles. These groups are considered economically important insects due to the destructive character of some of their members, such as subterranean termites, powderpost beetles, bark beetles and longhorn beetles. These insects are able to perform mechanical and enzymatic breakdown of coarse woody biomass that is critically important to the ecology of these ecosystems. This ability to subsist on woody biomass is in part due to the symbiotic associations that have evolved between these insects and their gut microorganisms.

"These passalid beetle gut communities represent an excellent model system for determining how microbial communities assemble and partition processes along physicochemical gradients to yield an efficient system that converts lignocelluloses into hydrogen, methane, ethanol and other bioenergy-relevant products," Pett-Ridge said.

The work was funded by the Department of Energy’s Office of Science.