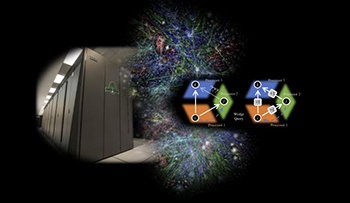 Whenever Amazon makes a shopping recommendation based on past purchases, Facebook figures you might know friends of friends or Instagram decides who qualifies as an “influencer,” they’re using tools called graph analytics to determine those multiple threads of connections.

Besides broad usage in the tech industry, graph analytics also have national security applications, where algorithms dig through massive datasets to find anomalies or patterns of nefarious activity. It’s in that vein that a Lawrence Livermore National Laboratory team of computer scientists and applied mathematicians searched for 1 quadrillion “triangles” — relationships such as three-way connections between friends of friends on a social network — using 1 million processors on LLNL’s IBM BlueGene/Q Sequoia supercomputer.

The work is the largest high-performance computing (HPC) triangle-counting effort to date and earned the team their third consecutive title of “Champions” at the 2019 IEEE HPEC Graph Challenge, an annual effort by MIT Lincoln Labs, IEEE and Amazon Web Services to develop a new kind of benchmark for analyzing graphs and data derived from social media, sensor feeds and scientific data. 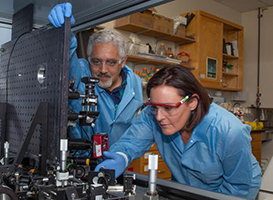 A cooperative research center that aims to develop vaccines for chlamydia has been established by the National Institutes of Health at Lawrence Livermore National Laboratory (LLNL).

The new center, to be funded under a five-year, $10.1 million grant from the National Institute of Allergy and Infectious Diseases (NIAID), will be a three-way partnership between LLNL and researchers from two University of California campuses — Irvine (UCI) and Davis.

“LLNL is extremely pleased to be named an NIH Cooperative Research Center, focused on developing new vaccines to prevent diseases that potentially touch so many lives,” said Kris Kulp, the acting leader of the Lab’s Biosciences and Biotechnology Division. “This project capitalizes on a wealth of expertise that our scientists have worked hard to build over the last decade and will help develop LLNL capabilities to create novel treatments for other diseases of national security interest.”

The team of scientists will build on a nanotechnology — called nanolipoprotein particles (NLPs) — that was developed at LLNL for delivering vaccines and drugs inside the human body. 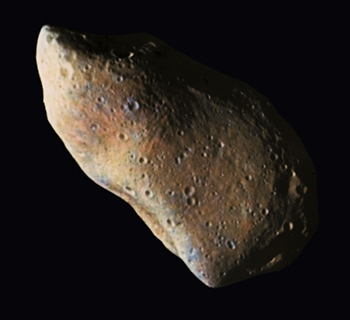 Bennu is a massive asteroid that has a remote chance of crossing paths with Earth more than a century from now.

An interagency team of researchers led by Lawrence Livermore National Laboratory (LLNL) has completed the first-ever, in-depth investigation into how an asteroid would respond to a nuclear deflection attempt.

The focus of the investigation was 101955 Bennu, a massive asteroid that has a remote chance of crossing paths with Earth more than a century from now. While the researchers aren’t concerned with a Bennu collision, the large asteroid does present an ideal subject for a comparative study of how effective different deflection technologies might be. It is the second examination of deflection technologies using Bennu as a test case.

The first Bennu case study found that a kinetic impactor – similar to using a spacecraft as a battering ram – would not be effective at deflecting a Bennu-class asteroid. This second case study, however, found that a standoff nuclear impulse would be effective in deflecting Bennu and protecting life on Earth.

“The whole purpose of studies like this is to help us shorten the response timeline if we were to see something coming at us,” said LLNL physicist Megan Bruck Syal, who is the LLNL planetary defense team lead and an author on the paper. “We don’t want to have to scramble to figure out whether to use an impactor or a nuclear device on a particular asteroid. These studies help us define those thresholds.” 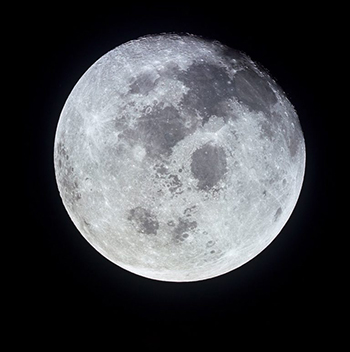 New research finds evidence of an ancient impact 4.3 billion years ago on the moon, churning rocks up to the lunar surface. Image courtesy of NASA

A team of Lawrence Livermore National Laboratory (LLNL) scientists has challenged the long-standing theory that the moon experienced a period of intense meteorite bombardment about 3.8 billion years ago, when the first forms of life appeared on Earth.

This theory is known as the Late Heavy Bombardment and is thought to have resulted from disturbance of the asteroid belt due to the outward migration of the giant planets. The Late Heavy Bombardment hypothesis was predicated on evidence from numerous impacts on the lunar surface around 3.8 billion years ago and suggested that there were essentially no prior impacts.

However, LLNL cosmochemists have examined a rock collected during the Apollo 16 mission in 1971 and found that a very large impact occurred around 4.3 billion years ago, thus challenging the Late Heavy Bombardment hypothesis.

By looking at a previously unstudied Apollo 16 lunar rock, the cosmochemists discovered that the sample came from deep in the lunar crust, solidifying at a depth greater than 20 kilometers. 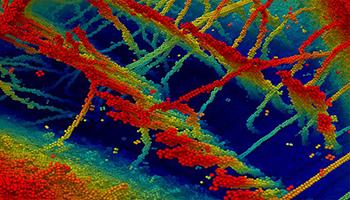 A snapshot of atomistic simulation models that contain twin boundary defects. Those defects play an important role in determining strengthening or softening of nanocrystalline-nanotwinned metals.

Studies of the nanoscale behavior of silver led to the creation of a type of the metal 42 percent stronger than any previously recorded, but which retained all of the electrical conductivity of softer types of silver which, according to a Lawrence Livermore National Laboratory and University of Vermont research team, could lead to advances in applications from aerospace to energy.

The key to the discovery was the defects that naturally occur in every metal, caused by imperfect formation of the geometrical lattice of atoms that form the material. Sometimes these defects lead to unwanted properties, such as brittleness or softening. The team was attempting to solve a problem that has dogged material scientists: Whenever an alloy is made to overcome one of these unwanted properties, the electrical conductivity drops.

The team doped silver with a small percentage of copper to control the behavior of defects in the silver lattice. Only a trace amount of copper was required – less than 1 percent by weight – but this produced a marked improvement in conductivity. The copper impurity turned two types of inherent nanoscale defects in the silver into a much stronger internal structure.