Heavier after the holidays

Waistlines aren’t the only thing that got heavier during the holidays. The International Union of Pure and Applied Physics got into the holiday spirit by crediting the Laboratory and its collaborators with the discovery of super heavy elements 115, 117 and 118.

The announcement means those three elements are one step closer to being named.

This discovery brings the total to six new elements reported by the Dubna-Livermore team (113, 114, 115, 116, 117, and 118, the heaviest element to date). The IUPAC announced that a Japanese collaboration officially discovered element 113. In 2011, the IUPAC confirmed the name Livermorium for element 116 to honor Lawrence Livermore National Laboratory and the city of Livermore, California. 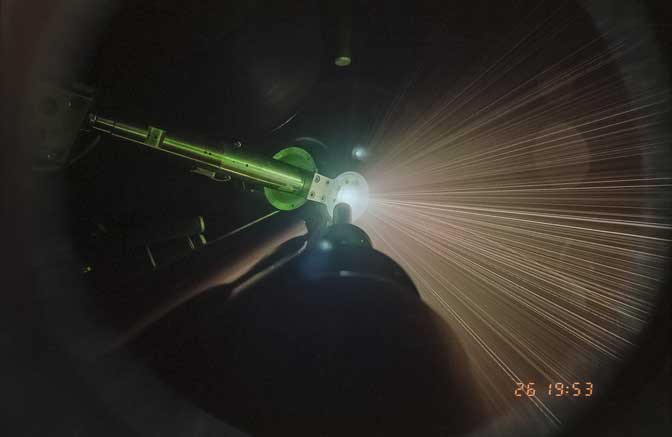 Laser shots strike a diamond anvil, driving a mixture of helium and hydrogen to the crushing pressures seen in Saturn’s interior. Image by Eugene Kowaluk.

When ultrapowerful lasers struck a diamond anvil, they instantly vaporized the diamond — but that was just a side effect of the experiment pictured above. The shock wave from the laser shot compressed a mixture of hydrogen and helium, mimicking conditions thought to exist deep within Saturn’s atmosphere.

Researchers have long suspected that heat and pressure make the two elements separate like oil and water. The result: a helium “rain” that falls toward the planet’s core, releasing energy that causes Saturn to glow more brightly than otherwise expected.

“We’re showing the first experimental evidence at conditions relevant to Jupiter and Saturn,” said Gilbert Collins, an extreme matter physicist at Lawrence Livermore. “It’s a surprise that [this] happens over such a broad regime of temperatures and densities.” 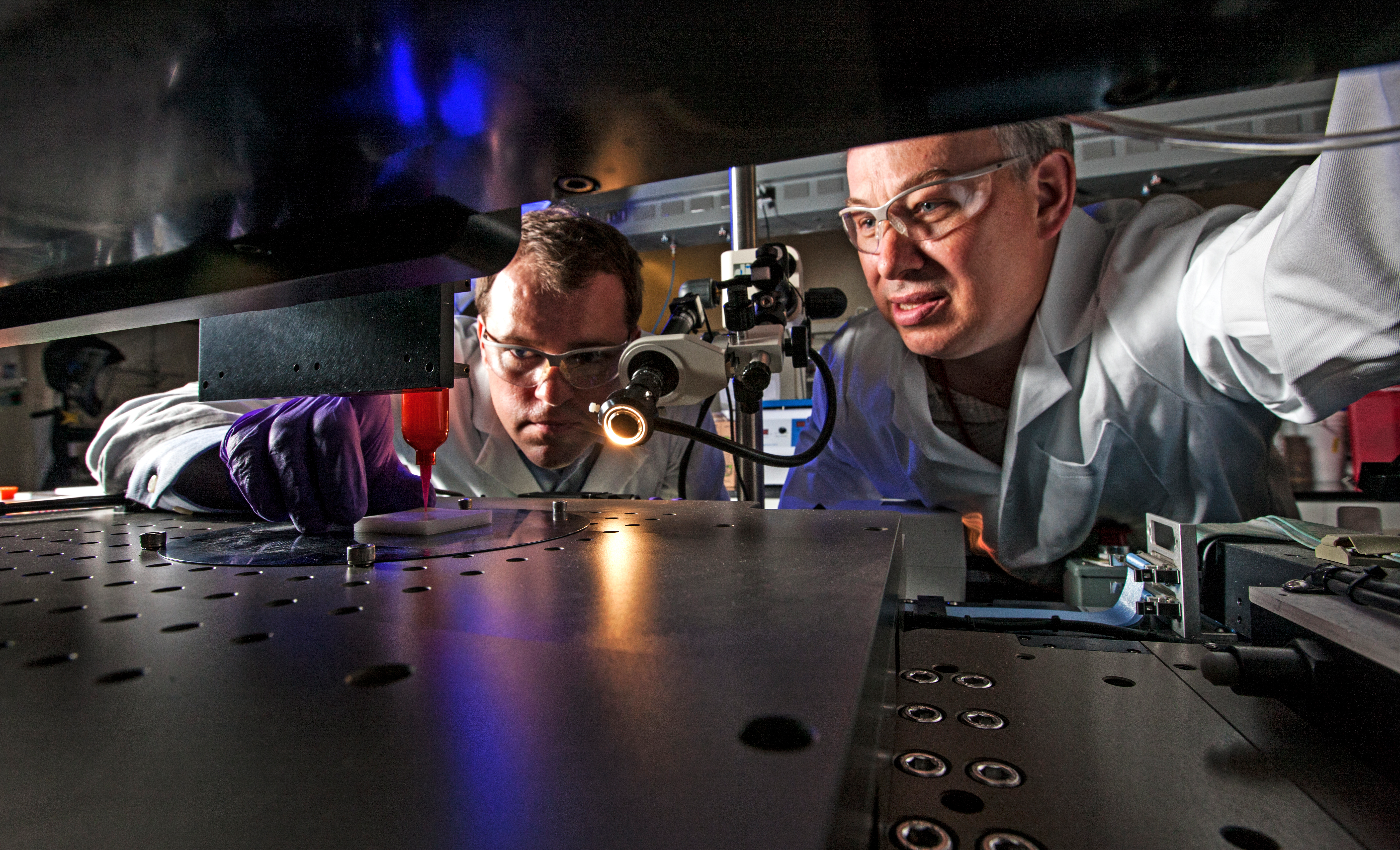 A head start on helmet safety

Head injury safety has become a prominent topic around the world, often with football at the center of the discussion.

And Lawrence Livermore researchers are doing something about it. The Lab has teamed up with software developer Autodesk on an 18-month agreement to produce more effective helmets for athletes (and soldiers). The team members are collaborating to design 3D-printed, custom-fitted helmet inserts, and possibly even helmets, as well as the software to make them, explained Livermore Lab researcher Daniel White.

"Helmets are more effective if they fit properly," White said. "Since every head is different, it makes sense that the ideal helmet would be custom-made for every individual."

While 3D printing plastic is common, Livermore Lab has developed the ability to 3D print soft pads with a microstructure that enables maximum absorption of impact forces. Autodesk is working on the software to assist with the design process. 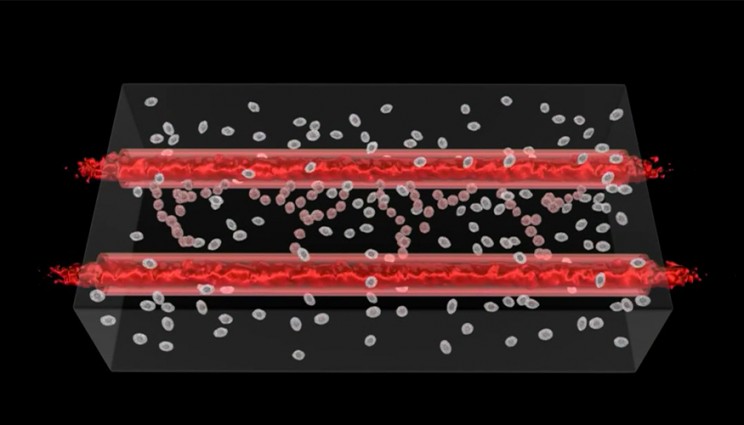 LLNL researchers say the precision and 3D structures made possible through bioprinting are enabling them to more effectively reproduce human physiology outside of the body.

Researchers at Lawrence Livermore have created a way to print 'living' blood vessels. This could change the way researchers look at diseases in the lab and open the door to new innovations for transplantable organs and tissues.

The team uses a 3D printer and a “bio-ink,” which is made of materials that are compatible with the human body and contain living cells.

Tissue and tubes are printed with bio-ink. The tubes act as artificial veins and arteries. Capillaries eventually self-assemble inside the tissue creating a network that functions just like the human body does. 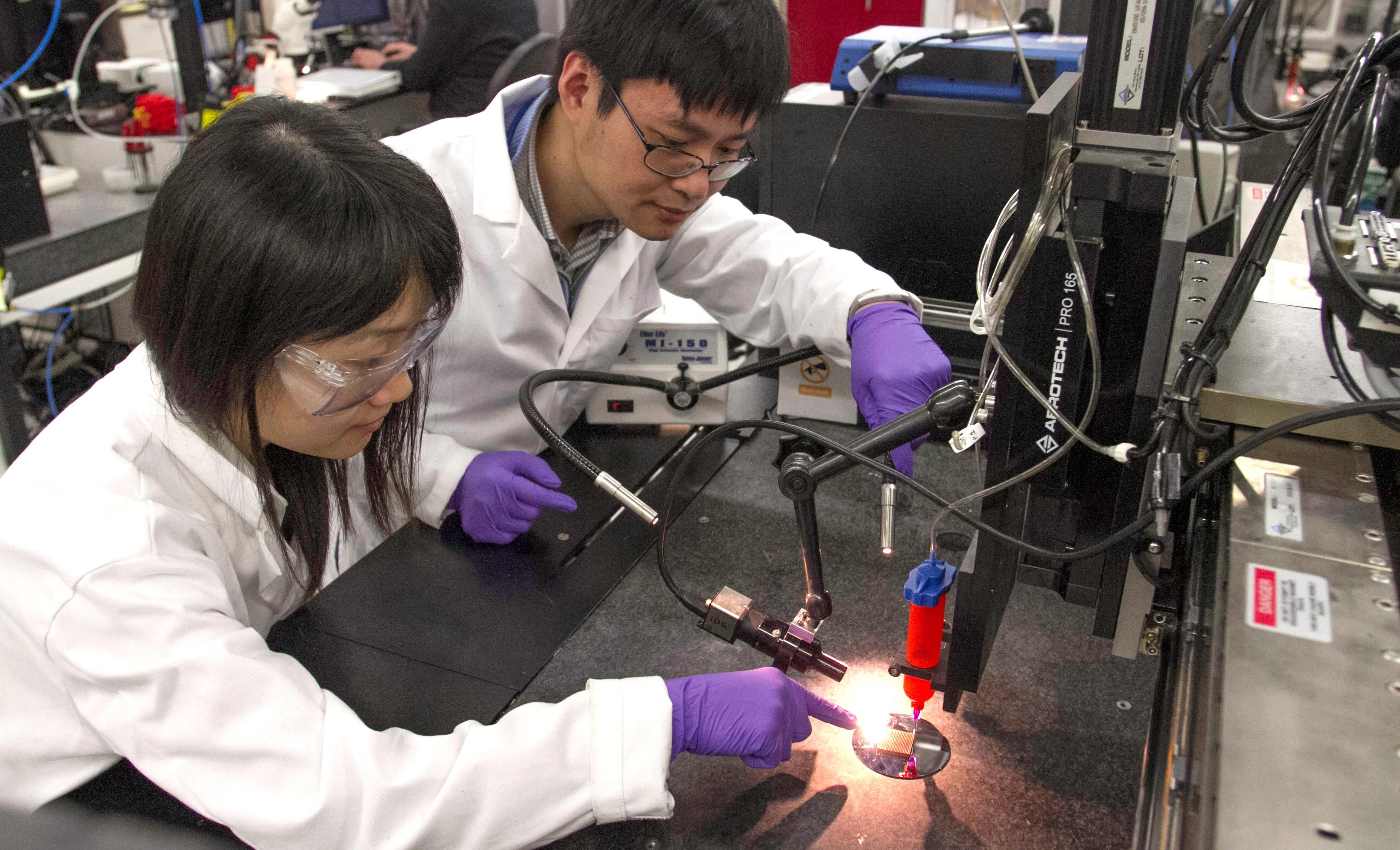 Thermites are a class of materials known for producing pyrotechnic displays in chemistry lessons, and they’re used in all kinds of real-world applications. But these reactions are very unpredictable, releasing a lot of energy. Scientists at Lawrence Livermore National Laboratory have figured out how to use 3D printing to exert more precise control over such materials.