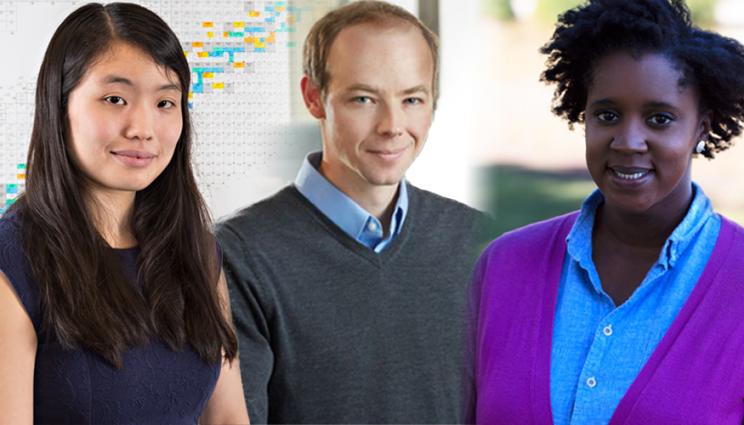 The Lindau Nobel Laureate meeting is an international scientific forum that provides an opportunity for about 600 students and postdocs from around the world to meet with 30 to 40 Nobel laureates. The meeting is intended to foster an exchange among scientists of different generations, cultures and disciplines. The 2021 meeting will be a hybrid event with an in-person scientific program of lectures and discussions broadcast virtually to some attendees.

“This is a significant honor for these postdocs, as well as for Livermore’s Postdoctoral Program,” said Kris Kulp, the former director of the program who oversaw the Lab’s Lindau nomination process. “The Lindau meeting will be a great opportunity for them to meet Nobel laureates, network with a diverse community of scientists and gain visibility on an international stage.”

The three fellows’ interests span the spectrum from applying physics to nuclear nonproliferation to investigating the origins of heavy elements in the cosmos. As part of the WATCHMAN (WATer CHerenkov Monitor of ANtineutrinos) collaboration, Akindele’s research is dedicated to detecting, from a large standoff, the operational status of a nuclear reactor, using antineutrinos measured with a gadolinium-doped water to detector at a distance. Edwards’ research focuses on how light and plasma affect each other in highly nonlinear regimes with the goal of building next-generation lasers and accelerators. Ong investigates weak r-process nucleosynthesis through an interdisciplinary approach that combines radioactive beam experiments, microanalytical cosmochemistry measurements and large-scale nucleosynthesis network calculations.

Akindele, an LLNL staff scientist working in the Nuclear and Chemical Science Division within the Physical and Life Sciences Directorate (PLS), said she is excited for the opportunity to gain new perspectives, and hopes the interaction during the meeting will aid her current research as well as future endeavors.

“I thank LLNL and the University of California for selecting me for the Lindau Nobel Laureate Meeting,” she said. “I feel fortunate for the opportunity to meet with other early career scientists and Nobel laureates from across the world and with multidisciplinary backgrounds.”

Ong, a Lawrence Fellow in the Nuclear and Chemical Sciences Division within PLS, said she looks forward to hearing from the Nobel laureates about their approach to their research and problem solving.

“For me the meeting will be a great chance to meet other young scientists from around the world,” she said. “Not just to learn about their work but also their experiences and the different academic cultures in different parts of the world.

Matthew Edwards, a postdoctoral fellow who works in the National Ignition Facility and Photon Science Directorate, said the meeting is an opportunity for him to meet other scientists from around the world and to hear about some of the most exciting research being done today.

“I am looking forward to being able to attend lectures and discuss current advances across a range of interdisciplinary areas of science,” he said. “Science requires teamwork, and large scientific endeavors require contributions from specialists in many different areas, as is well-illustrated by much of the work that LLNL does.”

The selection process to participate in the meeting began in July 2020, when the University of California Office of the President (UCOP) requested nominations from the Laboratory directors for the UC President’s 2021 Lindau Nobel Laureate Meetings Fellows. This program, a collaboration of the UC Office of the President, the UC National Laboratories Office and the UC Office of the Chief Investment Officer, provides funding for up to six national laboratory-affiliated postdoctoral fellows and students to attend the 2021 Lindau Nobel Laureate Meetings in Lindau, Germany. Kulp ran a selection process from among the Livermore postdocs who expressed interest, forwarding LLNL nominations to UCOP, which submitted them to the Lindau organization.