Deputy Director Tom Gioconda welcomes parents and their children to a day of activities and exploration. Photos by Jacqueline McBride/LLNL 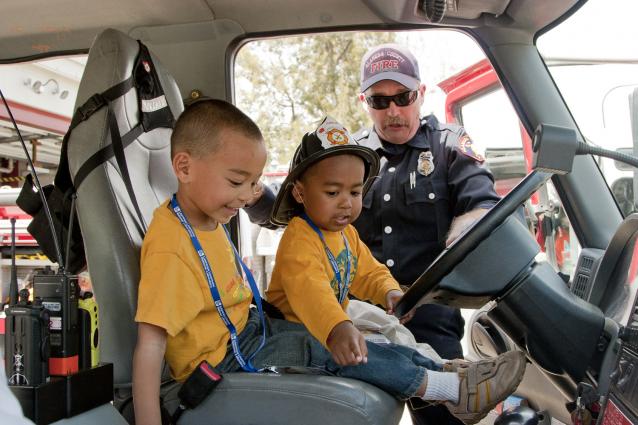 Diamano (left) and Takehiro, sons of Ibo Matthews of PLS, learn about driving a fire truck at the Fire House open house. 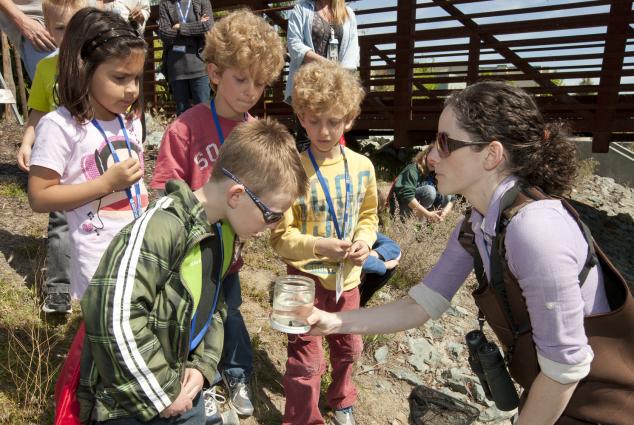 The median age of the Lab's population dropped Wednesday when hundreds of children and teens accompanied by their parents, came to the Lab for "Take our Daughters and Sons to Work Day."

The event coincides with the annual national program held this month whose goal is to acquaint girls and boys with the importance of what a parent or mentor in their lives does during the work day and also stresses the value of education. More than 40 spouses and 644 children attended the event.

To kick-off the day, a welcome presentation was held in a packed Bldg. 123 auditorium. Lab Deputy Director Tom Gioconda quipped, "There are more people here than at an all-hands meeting." The opening was also simulcast to auditoriums in Bldg. 543 and Bldg. 453, to accommodate large number of visitors.

"It is my honor to welcome you here to see the wonderful place called the Livermore Lab," he said.

"There is one word to describe the Lab -- passion," he said about the dedication and commitment of those who work here.

He went on to explain that the Lab works to solve the problems of the nation.  "You are going to see the Livermore label on a lot of things," he said about the future.

Tammy Jernigan, astronaut and currently Lab deputy principal associate director, WCI, talked about her career and showed slides from her space shuttle missions. "We live on an extraordinary planet," she remarked.

Event goers boarded shuttle buses, took private cars or went by foot to the Bldg. 543, 551, 453 and Lake Haussmann, as well as NIF for a number of activities that offered something for every interest and age group.

A photography studio open house allowed children to learn more about creativity and taking portraits. Nature walks with a wildlife biologist explored the area near Lake Haussmann and allowed visitors to learn about its inhabitants, such as snails and mosquito fish.  Self-guided tours of NIF shed light on the power of the world's largest laser.

For the older set, there were encore presentations of the Lab's popular "Science on Saturday" lectures, "Restoring Sight to the Blind,"  by Sat Pannu and "Space Junk: Traffic Cops in Space," by John Henderson.

A career expo in the atrium of Bldg. 543 brought a large crowd for various hands-on activities such as the water cycle, creative ways to use recycle items, how to make bio putty and a computer demo called, "Python turtle."

The event was sponsored by the Strategic Human Resources Management and the Public Affairs Office.