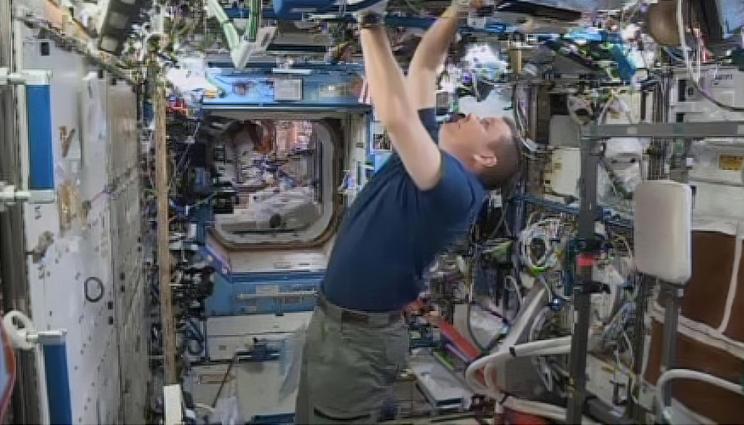 A five-year microbial study of the International Space Station (ISS) and its astronauts by Lawrence Livermore National Laboratory (LLNL) and NASA researchers has found that the ISS habitat is safe for its residents.

The research effort represents the first comprehensive characterization of the space station’s environmental profile (or microbiome) and is the first to compare the ISS microbiome to an astronaut’s microbiome using metagenomic DNA sequencing techniques.

Their paper, published in the journal Microbiome, is the work of scientists from LLNL, the Pasadena-based Jet Propulsion Laboratory (JPL) and two NASA centers: Ames Research Center in California's Silicon Valley and the Houston-based Johnson Space Center.

“Although our survey found several opportunistic microbes, we concluded that the ISS is a safe environment for the astronauts,” said LLNL biologist Crystal Jaing, a co-author of the paper.

Jaing’s colleague, Kasthuri Venkateswaran, the lead author of the most recent paper and a microbiologist at JPL, agreed with her assessment.

“We see the ISS environment as safe. The astronauts have been keeping it tidy by maintaining space station cleanliness.”

“We all worked in harmony and the different expertise of the different institutions made the collaboration work well,” he said, citing JPL’s flight experience, LLNL’s molecular biology capabilities and Johnson’s viral expertise.

Over the course of the five-year research effort, from 2015 to 2020, the team conducted two major studies. In the Microbial Tracking (MT)-1 project, led by Venkateswaren, the microbial diversity from space station surfaces and air samples were characterized using both conventional microbiology and molecular techniques. The MT-2 study, headed by Jaing, expanded upon the first survey by comparing astronaut samples with samples from the exact same surfaces studied by MT-1.

In their paper, post-flight analyses demonstrated that Staphylococcus sp. and Malassezia sp. were the most common bacterial and fungal species present, respectively.

Generally, neither of these two organisms are harmful and those findings show that the ISS microbiome was dominated by organisms associated with human skin.

“Overall, the ISS surface composition was extremely stable beyond a few small changes during our five-year study,” Jaing said. “It’s a dynamic process, just like the human body.

“The ISS antimicrobial resistance gene profiles also were stable over time, with no differences over the span of the MT-1 and MT-2 studies. This means that the ISS microbiome doesn’t have any new antibiotic-resistant genes, which is safer for the astronauts.”

“Together, the MT-1 and MT-2 studies have provided us with microbial snapshots of the ISS over five years and allowed us to understand the microbiome of the ISS surface,” Venkateswaran said.

The microbial composition of samples from both the astronaut and the space station’s environment was measured using metagenomic sequencing and processed using the Livermore Metagenomics Analysis Toolkit, a bioinformatics software that rapidly identifies microbes — including bacteria, viruses or fungi — from huge amounts of DNA sequence data.

Although this study used samples returned from space, NASA has the ability to identify microbes in real time aboard the space station and is planning real time microbial monitoring on future spacecraft as well.

The ISS is one of the most uniquely sealed environments in existence in space or the world, with only the arrival of new astronauts and supplies introducing new microbes.

The MT-1 study was the focal point for three ISS missions, while the MT-2 survey relied on data from four missions. Together, the two studies utilized 352 samples from astronauts and 56 ISS surface composition samples.