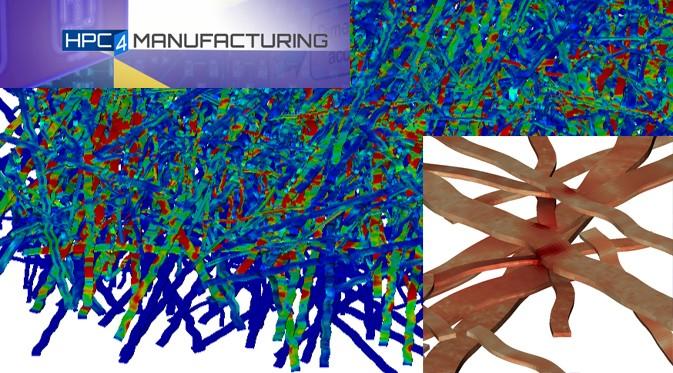 Lawrence Livermore researchers are developing a parallel program called p-fiber to help Procter & Gamble simulate the way in which paper fibers contact each other.

An HPC for Manufacturing project aimed at saving time and money for paper product manufacturers earned an HPC Innovation Excellence Award at the 2017 SuperComputing Conference (SC17) in Denver on Nov. 14.

The project, led by LLNL researcher Will Elmer, was a collaboration with consumer goods manufacturer Procter & Gamble and required the development of a parallel program called p-fiber, capable of quickly preparing the fiber geometry and meshing input needed to model thousands of paper fibers at once. Using p-fiber, along with ParaDyn (the parallel-computing version of thermomechanical modeling code DYNA3D), Elmer and team were able to generate up to 20 million finite elements, and modeled the most paper fibers in a simulation to date.

The project was one of 10 winners of HPC Innovation Excellence awards at SC17, out of more than 110 submissions. The awards, given out by analyst Hyperion Research, recognize outstanding achievements enabled with high-performance computing, and are chosen by the HPC User Forum steering committee, a volunteer group of HPC experts from throughout the world.

Elmer said he was surprised to be notified of the award, and added that the HPC4Mfg program was "well received" at a recent HPC User Forum event in Milwaukee.

"I think other participants liked to see a novel and niche use of supercomputing for preprocessing (input preparation)," Elmer said. "The fact that we are mentioned along with very well-funded and staffed efforts shows the how targeting our collaborator’s (Procter & Gamble’s) value proposition early in the project-planning cycle really paid off. I think the way HPC4Mfg proposals are written really helps a lab principal investigator like myself understand the company’s needs."

The results of the project could speed up development and reduce costs for manufacturers of products such as paper towels, tissues and toilet paper. Large-scale manufacturers like Procter & Gamble typically use high-performance computing, modeling and simulation of fiber meshing behavior during the initial stages of new product design, which can be time-consuming and expensive.

The research was supported by the HPC4Manufacturing program, managed by the Department of Energy’s Advanced Manufacturing Office within the Energy Efficiency and Renewable Energy Office.