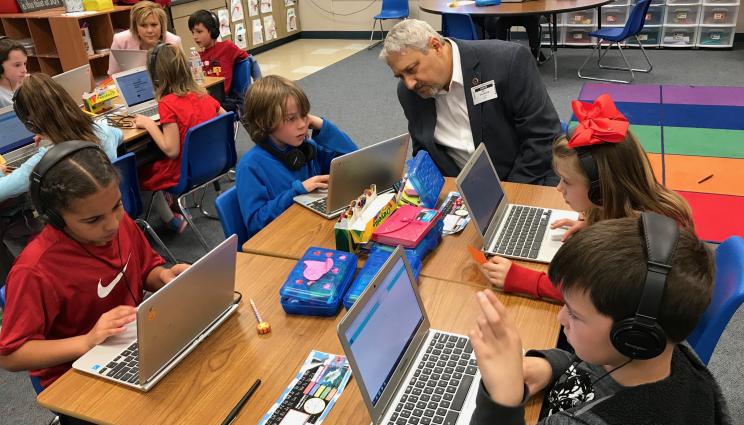 Lawrence Livermore National Laboratory (LLNL) Director Bill Goldstein visited Lawrence Elementary School last week to meet the Lawrence "Labs" and be part of the ribbon-cutting ceremony that officially welcomed the school to the Livermore community. Leaders of the Livermore Valley Joint Unified School District (LVJUSD) and the City of Livermore joined the dedication, which took place at the school’s new marquee.

Principal Kristie Starkovich welcomed students, families, staff and guests to the ceremony. "We are excited to officially dedicate the opening of Lawrence Elementary with our community and look forward to providing a creative environment that engages our students in innovative learning," Starkovich said.

Goldstein toured the campus Friday afternoon, observing students engaged in learning in a variety of classrooms across all grade levels. During the ceremony, Goldstein referred to the culture already at work in the new school. "Seeing the teamwork in the classrooms, with teachers and students, brought to mind Ernest Lawrence, who was a big believer in teamwork," he said. 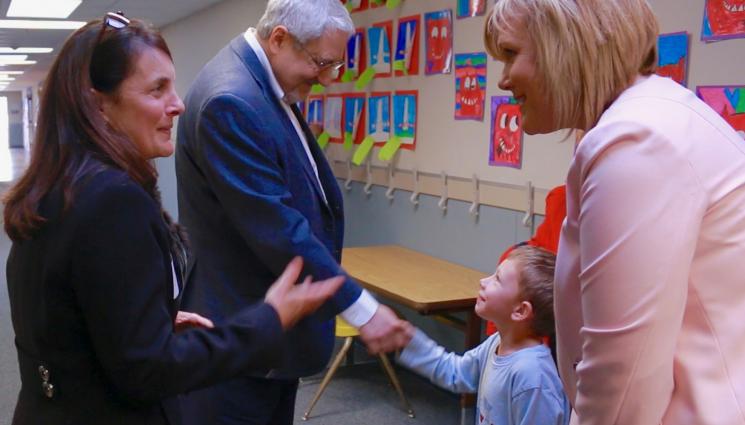 Livermore Mayor John Marchand, proudly wearing his Livermorium pin that commemorates the contributions of LLNL scientists, expressed his confidence that students at the school would "continue Lawrence’s work and use their education for the betterment of humankind."

Lawrence Elementary opened its doors as a satellite campus in November 2016 to accommodate an influx of students to LVJUSD. In April 2017, the school board approved and appointed a naming committee, comprised of school staff, students and community members, which was tasked with choosing a name for the school that would hold significance for its community. After compiling the results of surveys and suggestions, the committee put forward names that reflected community input and the school’s focus on science, technology, engineering, arts and mathematics (STEAM).

The name of Lawrence Elementary emerged as the clear stakeholder favorite for a permanent school name in honor of LLNL’s significance to the community and its partnership with Livermore schools. On June 13, 2017, the Board of Trustees officially approved the name of Lawrence Elementary. To represent their school, students voted for a Labrador as their mascot, proudly calling themselves the "Lawrence Labs."

In honor of the connection to LLNL, Goldstein said: "This community has always been welcoming to all of us at the Lab over the years, and the name of this school reinforces that feeling of belonging."

Kelly Bowers, superintendent of schools, added: "We are so fortunate to be part of such an innovative and generous community. We are truly grateful for our ongoing partnership with LLNL and all LVJUSD schools."

"The ribbon-cutting ceremony was an opportunity to celebrate the culmination of efforts of many caring and supportive people who worked together to create and provide an incredible learning opportunity for the children and families of Livermore," said Scott Vernoy, LVJUSD director of student services, who served as interim principal as the school was opening. 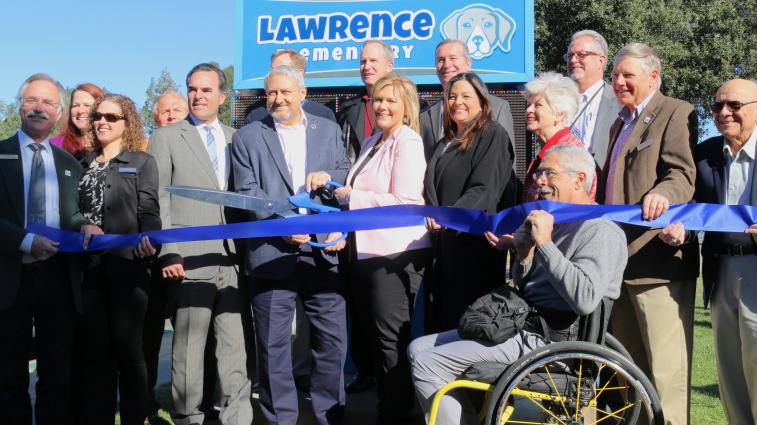