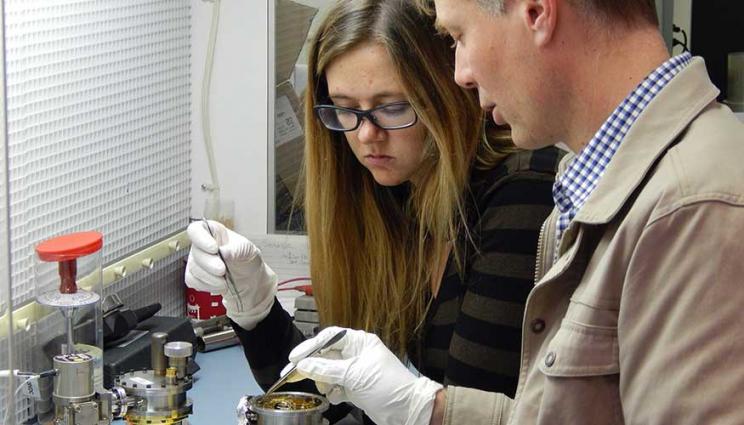 Lab physicist Morgan Burks (right) and graduate student Lena Heffern are shown working with a “GeMini Plus” prototype that will be developed and readied for use in outer space. The two LLNL scientists are part of a scientific team that has been chosen as one of five finalists for a possible NASA Discovery Program mission to explore a metallic asteroid. Photo by Stephen Wampler

Two LLNL scientists are part of a scientific team that has been chosen as one of five finalists for a possible NASA Discovery Program mission.

The two Livermore scientists, physicist Morgan Burks and nuclear engineer Lena Heffern, a graduate student, are teamed with researchers from The Johns Hopkins University Applied Physics Laboratory (JHUAPL) on a proposal to explore a metallic asteroid.

"We’re pleased to be part of one of the five teams that have been chosen to advance and could potentially be on the one or two teams selected to perform a Discovery Program mission," said Burks, who is the principal investigator for LLNL’s contribution to the project.

Earlier this year, LLNL and JHUAPL received a three-year, $3 million grant from NASA to develop and space qualify a new high-purity germanium detector known as "GeMini Plus," which would be the foundational technology deployed for the 16 Psyche exploration, if it is selected as a Discovery Program mission.

One of the 10 most massive asteroids in the asteroid belt, 16 Psyche is a Trojan asteroid that follows in Jupiter’s orbit. It represents the only place in the solar system where scientists can directly study a possible planetary core.

In late September, NASA selected five science investigations for further studies – or refinement – during the next year as a first step in choosing one or two missions for flight opportunities as early as 2020. The other four finalists include two proposals that would study Venus, one that would explore near-Earth objects and another that also would investigate other asteroids.

NASA will make the final selections by September 2016 for continued development leading up to launch. Any selected mission will cost about $500 million, not including launch vehicle funding or the cost of post-launch operations.

A panel of NASA researchers and officials, as well as other scientists and engineers, reviewed 27 proposals before narrowing down the field to five finalists.

Scientists and engineers from LLNL and JHUAPL are the same team that built and delivered the Gamma-Ray Spectrometer (GRS) instrument used for NASA’s Mercury MESSENGER (short for MErcury Surface, Space ENvironment, GEochemistry and Ranging) spacecraft. At the heart of the GRS is a high-purity germanium sensor system developed by LLNL scientists.

Scientific data from the GRS instrument aboard the Mercury MESSENGER, an earlier NASA Discovery Program mission, is causing researchers to rethink their theories on the planet’s formation.

After a six-and-a-half year voyage to Mercury, the planet closest to the sun, instruments onboard MESSENGER started operating in mid-March 2011 as the spacecraft started the first of its more than 4,000 orbits around Mercury. The mission ended in April of this year, completing more than four years of orbital measurements.

These high-purity germanium-based gamma-ray spectrometers have included the Cryo-3, the Mercury MESSENGER GRS and the original GeMini. The latter instrument will be commercialized by Tennessee-based ORTEC, a subsidiary of AMETEK.

Burks believes that the success of the Mercury MESSENGER GRS has demonstrated the important science that can be achieved with gamma-ray spectroscopy and has raised the visibility of the LLNL-Johns Hopkins team.

The GeMini Plus technology would be utilized to measure the gamma rays emitted from the surface of 16 Psyche. Such gamma rays are characteristic of the elemental composition of the asteroid’s surface. As envisioned, the scientific team would explore the origin of planetary cores by studying the asteroid 16 Psyche, which is most likely composed of iron/nickel metal.

Linda Elkins-Tanton of Arizona State University in Tempe is the 16 Psyche principal investigator. NASA’s Jet Propulsion Laboratory in Pasadena would manage the project.