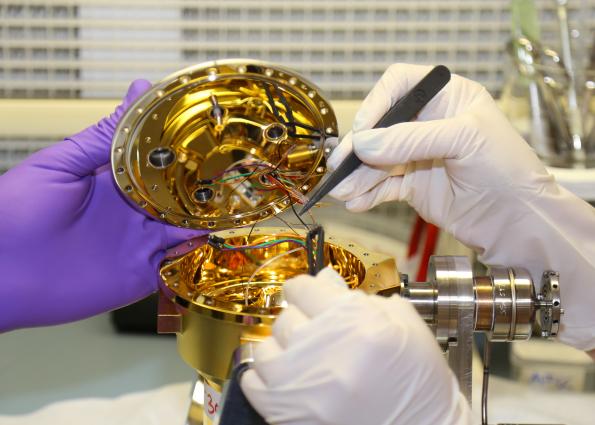 LLNL scientists perform assembly work on a prototype gamma-ray spectrometer that is undergoing tests as part of an effort to design and build an instrument to fly aboard a NASA mission to the 16 Psyche asteroid. Photos by Carrie Martin/LLNL.

In a few years, an instrument designed and built by Lawrence Livermore National Laboratory (LLNL) researchers will be flying hundreds of millions of miles through space to explore a rare, largely metal asteroid.

The Livermore gamma ray spectrometer will be built in collaboration with researchers from the Johns Hopkins Applied Physics Laboratory for the first-ever visit to Psyche, the largest metal asteroid in the solar system.

"It’s scientifically interesting because it is thought to be a planetary core, a remnant of a collision during the early stages of the development of the solar system," said LLNL physicist Morgan Burks, who heads the Lab team. "We believe that exploration of the Psyche asteroid could increase our understanding of the hidden cores of Earth, Mars, Mercury and Venus."

The principal investigator for the Psyche mission, Lindy Elkins-Tanton of Arizona State University (ASU), has noted that the exploration of Psyche will permit scientists to "literally visit a planetary core — the only way humankind ever can."  The NASA Discovery mission to Psyche is led by ASU. 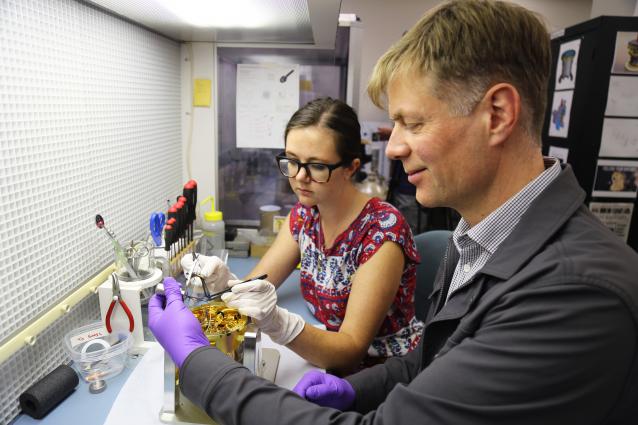 Since Psyche’s largely iron and nickel metallic composition resembles Earth’s core, the study of the asteroid could help researchers better understand how a planet’s layers, such as crusts and cores, separate.

Asteroids are rocky space bodies that orbit around the sun and range in size from tiny dust particles to upward of 600 miles in diameter.

Named for the Greek goddess of the soul, Psyche resides in the asteroid belt between Mars and Jupiter. This belt is home to more than 1 million other asteroids larger than a half-mile in diameter, along with many smaller ones, according to NASA estimates.

The Lab’s gamma ray spectrometer will determine the elemental composition of Psyche’s surface. Although the asteroid is primarily composed of iron and nickel, other elements of interest include silicon, potassium, sulfur, aluminum, calcium, thorium and uranium.

"Psyche's surface releases a large number of gamma rays that are induced by cosmic ray bombardment," Burks said. "By measuring the energy of the gamma rays with high resolution, it is possible to determine the composition of the planet's surface. Each element gives off a unique gamma ray signature."

Lab scientists will work with collaborators from the Johns Hopkins Applied Physics Laboratory (JHAPL) and together the team will integrate the gamma ray spectrometer with a neutron spectrometer for the spaceflight. The new gamma ray spectrometer (GRS), dubbed the GeMini-Plus, will be the second GRS designed and built by LLNL for space exploration within the past 13 years.

In 2004, the Mercury MESSENGER (short for MErcury Surface, Space ENvironment, GEochemistry and Ranging) was launched into space with a suite of seven instruments, including an LLNL-developed GRS.

The Mercury MESSENGER GRS and other instruments journeyed through the hostile environment of space to the innermost planet in the solar system for about 6.5 years and more than 4.8 billion miles. 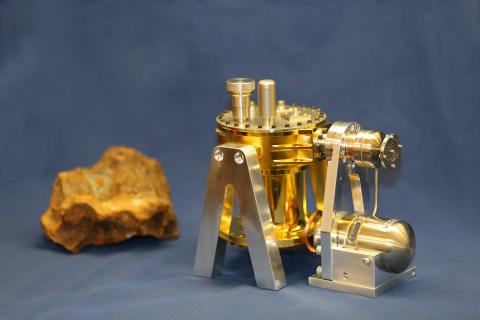 Once there, the spacecraft took measurements for about four years during more than 4,000 orbits in the broiling surroundings, where the sun is 11 times brighter than on Earth and the temperature can reach 400 degrees Celsius (752 degrees Fahrenheit).

To ensure the germanium-based spectrometer operated properly, Lab researchers devised a thermal and mechanical cooling design that allowed the crystal to live at -200 degrees Celsius (-330 degrees Fahrenheit), while rejecting 98 percent of the infrared heat and energy from Mercury.

"The GeMini-Plus for the Psyche mission benefits from years of research and development from the Mercury MESSENGER project and other Lab GRS instruments. In effect, we’re leveraging the R&D that we achieved during the MESSENGER preparation and flight," Burks said.

The new GeMini-Plus will be the fourth generation of high-purity, germanium-based gamma ray spectrometers – following the Cryo-3, the Mercury MESSENGER GRS and the original GeMini. The latter instrument has been commercialized by Tennessee-based ORTEC, a subsidiary of AMETEK.

About the size of a loaf of bread, the new GeMini-Plus will be built by LLNL over the next three years. It will be comparable in size and power to MESSENGER GRS.

Burks heads a small team of Lab researchers, including Lena Heffern, a graduate of California State University, Chico, that is building and testing the prototype GeMini-Plus instrument. Development of the instrument is set to begin this fall.

The shuttle-bus-sized spacecraft that will journey to Psyche will be built by Space Systems Loral from the Bay Area. It is expected to be launched in 2022 from the Kennedy Space Center in Florida and arrive at the asteroid in 2026.  GeMini-Plus will operate for about one year.

The Livermore instrument is one of three key scientific instruments for the Psyche mission, with ASU building a multispectral imager and UCLA delivering a magnetometer to measure the asteroid’s magnetic field. The Pasadena-based NASA Jet Propulsion Laboratory is responsible for mission design, operations and science planning.

There has long been a synergy for some scientific instruments, such as gamma-ray spectrometers, for applications in outer space exploration and back on Earth for homeland security applications, such as to detect nuclear materials.

Officially known as 16 Psyche (the number designates the order in which it was discovered), the asteroid was first found in 1852 by an Italian astronomer. Some 130 miles (or 210 kilometers) in diameter, it is one of the 10 most massive asteroids in the asteroid belt.

The Psyche visit is one of two asteroid missions that NASA announced in January; it is funded through NASA's Discovery Program. Under the second mission, another robotic spacecraft, dubbed Lucy, will explore six Jupiter Trojan asteroids that are fossils of planet formation and could supply important clues to the earliest history of the solar system.

The aim of NASA’s Discovery Program is to improve our understanding of the solar system by exploring planets, moons and other bodies. Discovery class missions are managed for NASA’s Planetary Science Division by the Planetary Missions Program Office at Marshall Space Flight Center in Huntsville, Alabama.