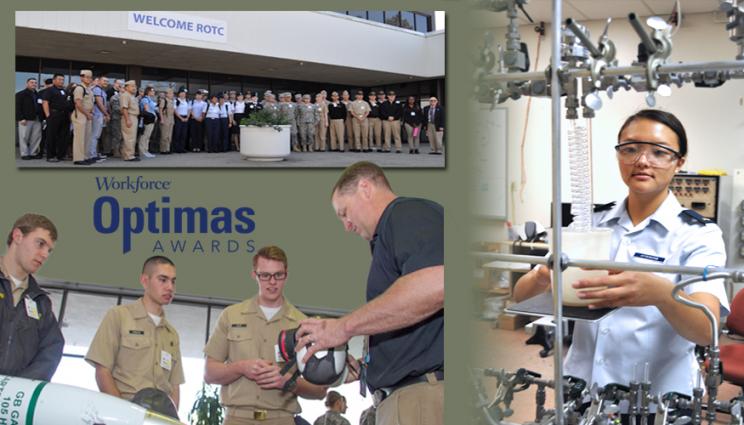 Lawrence Livermore National Laboratory has been honored with a Gold 2016 Optimas Award for Recruiting from Workforce Magazine, recognizing the Lab for excellence in its military internship programs.

Lawrence Livermore National Laboratory has been honored with a Gold 2016 Optimas Award for Recruiting from Workforce Magazine, recognizing the Lab for excellence in its military internship programs.

The Optimas awards are given out annually in 10 categories. The recruiting award recognizes organizations that have developed and implemented an innovative and effective recruitment initiative that helped the organization source, attract and recruit job candidates.

The three programs the magazine highlighted for effective recruiting at LLNL are the Military Academic Research Associates program (supported and funded by the NNSA NA-10 Military Academic Collaborations Program), the ROTC Internship Program and the Newly Commissioned Officer program, which combined have brought in more than 400 cadets and midshipmen since the late 1990s.

"The ROTC and academy programs are different from anything else we do here in human resources," said LLNL’s manager for Undergraduate & Graduate Internships Barry Goldman, who founded the programs. "The difference is the academy and ROTC cadets and midshipmen move on to a military career where their experience at LLNL might benefit them and their services. When they complete their service, they might return to LLNL with military experience in the sciences and engineering fields. While in the service, they may be involved in future collaborations with the Laboratory in a variety of national security areas. It’s a win-win."

The Military Academic Research Associates program, which started in 1996, brings an average of 25-30 cadets, midshipmen and faculty from the academies to the Lab annually for a four- to six-week summer internship, where they are placed in a number of key areas, including global security, engineering and materials science. They also receive weekly lectures on the breadth of military work done at the Lab.

"They’re experiencing who we are and what we do in support of the military and Department of Defense, while contributing a military perspective and being productive for the Lab researchers," Goldman said.

Since 2010, LLNL has been growing the ROTC intern program and over the most recent couple of years, LLNL has hosted an average of 15-16 cadets and midshipman from universities across the country. They stay for 12 weeks during the summer and support research at the Lab. The program is supported by LLNL’s National Security Office (NSO).

George Sakaldasis, the deputy director for Military/Nuclear Affairs in NSO, said: "the ROTC program and our other military education efforts are providing a core of future military leaders who may one day be in the position of influencing the Laboratory’s programs for years to come."

The Newly Commissioned Officer program provides an opportunity for the newly commissioned officers to participate in LLNL programs and technologies. The participants also benefit from networking between the services and with LLNL’s general summer student population. Two 2nd lieutenants are currently working at the Lab under the program.

Workforce Magazine awards the Optimas each year for human resources and workforce management initiatives that achieve business results. Management professionals nominate their own initiatives, which are then chosen by the magazine’s editors.

"For more than 26 years we’ve seen companies place increasing importance on human resources initiatives, realizing the potential a strong HR department can have on business growth," said Rick Bell, managing editor of Workforce Magazine. "This year’s finalists stand out in an ever-expanding field of qualified nominees, and we’re pleased to see so many organizations using innovative HR practices to improve their business."

LLNL is looking to place ROTC cadets and midshipmen for its summer 2017 program. For more information or to apply for an internship, contact goldman1 [at] llnl.gov (Barry Goldman).