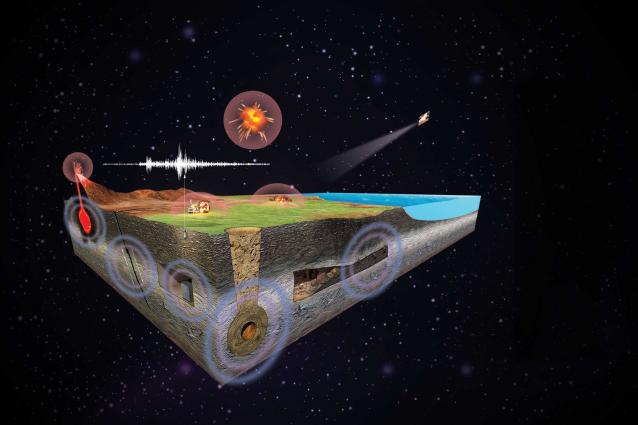 This cutaway view through Earth's subsurface shows many of the disturbances recorded by sensors worldwide. 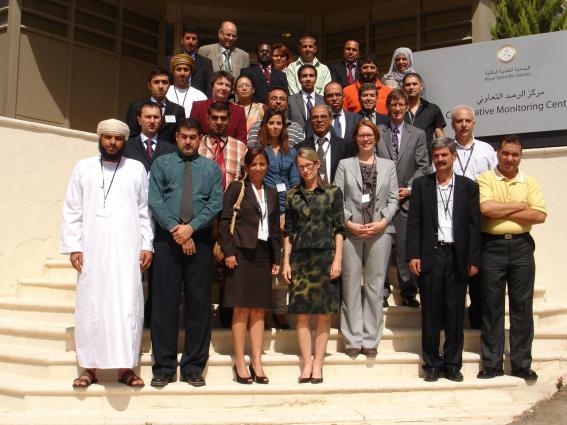 Participants in the workshop hosted by the National Nuclear Security Administration (NNSA) and the Provisional Technical Secretariat (PTS) of the Preparatory Commission for the Comprehensive Nuclear-Test-Ban Treaty Organization (CTBTO). LLNL's Rengin Gok, front row, third from left, was the Lab representative.

In a first for the region, a Lab seismologist recently took part in a workshop in Amman, Jordan to work more closely with seismology centers throughout the Middle East. The workshop was hosted by the National Nuclear Security Administration (NNSA) and the Provisional Technical Secretariat (PTS) of the Preparatory Commission for the Comprehensive Nuclear-Test-Ban Treaty Organization (CTBTO).

The Comprehensive Test Ban Treaty (CTBT) was opened for signature in September 1996 and obligates countries that sign and ratify "not to carry out any nuclear weapon test explosion or any other nuclear explosion." It provides for an extensive monitoring regime to detect nuclear explosions, a data distribution process and on-site inspections. It also established the CTBTO, which is located in Vienna, Austria, to implement these requirements.

The Laboratory has a rich history in the International Monitoring System, which is overseen by the International Data Centre. Every country supporting the system has or is in the process of developing a National Data Center (NDC). LLNL scientists are at the forefront of research to more accurately distinguish nuclear explosions from the rest of Earth's seismic activity, including earthquakes, volcanoes and mine blasts.

Livermore provides research and development support to the U.S. National Data Center at Patrick Air Force Base in Florida, which is responsible for U.S. nuclear test monitoring and international treaty verification. In addition, LLNL has a long history of collaboration in regional seismology efforts in the Middle East, facilitated by NNSA. The NNSA Confidence Building Measures Program builds trust, transparency, and capacity among indigenous science and technology communities to address nuclear proliferation and security concerns.

LLNL's Rengin Gok was the lead organizer for the workshop in Amman in conjunction with NNSA and the CTBTO.  At the workshop, Gok, NNSA representatives, technical experts from 12 countries and the CTBTO worked together to develop a wide-ranging agenda to promote capacity building and transparency in this crucial area of nuclear proliferation.

More than 230 of the recording systems now send data to the International Data Centre on a provisional basis. This unique network is designed to detect nuclear explosions anywhere on the planet -- in the oceans, underground or in the atmosphere.

After the treaty enters into force, the signatory countries will have the role of identifying an event as a violation. The treaty also specifies several ways to resolve concerns about suspicious events, from consultation and clarification through a protocol that could lead to on-site inspections.