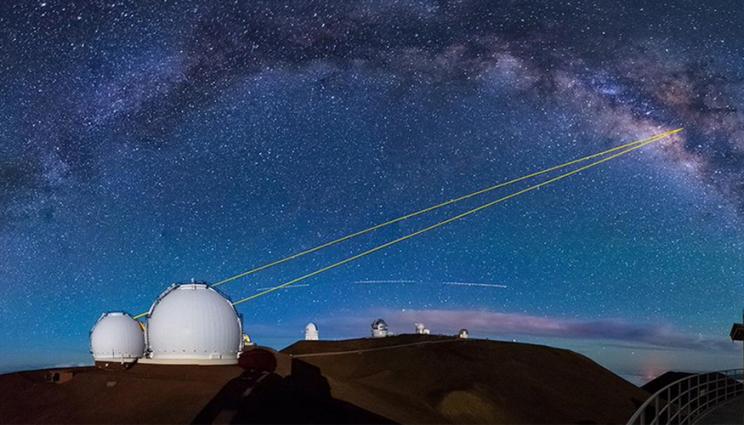 The Keck I and Keck II laser guide stars training on the black hole at the center of the Milky Way. Researcher Andrea Ghez used the Keck guide star to conduct her Nobel-winning work. Image courtesy of Keck Observatory.

The 2020 Nobel Prize in physics has been awarded to Andrea Ghez of the University of California, Los Angeles, and Reinhard Genzel of the Max Planck Institute for Extraterrestrial Physics, for their discovery of the black hole at the center of the Milky Way galaxy. They share the award with Roger Penrose of Oxford University for his mathematical proof that black holes are an inevitable consequence of general relativity.

Ghez has close ties with Lawrence Livermore National Laboratory (LLNL) beginning with her work at the Lick Observatory on Mount Hamilton. At the W.M. Keck Observatory in Hawaii, the adaptive optics (AO) systems on those telescopes dramatically sped up the process of making the intricate observations of stellar orbits needed to infer the presence of the supermassive black hole at the galactic center.

In the 1990s, she and LLNL scientist Scot Olivier and former LLNL scientists Claire Max and Bruce Macintosh were instrumental in standing up the Center for Adaptive Optics. The center’s goal was to lead the revolution in AO by developing and demonstrating the technology, creating major improvements in AO systems and catalyzing advances nationwide. LLNL had a lead role in the development of the instruments and Ghez had a lead role in the use of those instruments for astronomy.

“She was incredibly inspiring — her enthusiasm for science was so incredible, just being in the same room with her made you feel that all this astro stuff was the most important thing in the world,” Macintosh said. “She's really one of the very best observational astronomers in the world.”

AO works by first taking an observation of a “guide star” — either a nearby natural star, or an artificially created point source made by exciting sodium atoms in the upper atmosphere with a powerful laser. The known position and brightness of that point source is used to calculate the effect of atmospheric turbulence at that instant. Using that information, the wavefront of the light from the astronomical target actually being observed can be reshaped in real time, via equipment such as rapidly deformable mirrors, to compensate for those atmospheric distortions.

The series of observations for Ghez’s most precise constraint of the mass of the supermassive black hole at the center of the galaxy began with the LLNL Keck Laser Guide Star.

“She was an excellent communicator and proponent of the scientific utility of the instrumentation that we developed, as well as an exceptional scientist who was an enthusiastic champion for the areas of astronomy in which she led seminal investigations,” Olivier said.

In addition to Ghez’s work, this year’s Nobel recipient for chemistry, Jennifer Doudna from Lawrence Berkeley National Laboratory, won for her work in gene editing. Her work was built upon foundational biology research conducted as part of the Human Genome Project, led by Lawrence Livermore, Los Alamos and Lawrence Berkeley national laboratories.

“This is an honor for the whole complex and how we do discovery-to-applied research every day,” said Paul Dabbar, undersecretary of DOE’s Office of Science, in a letter congratulating all laboratory directors.