Rothrock assisted Nick Williams, tour guide and science presenter, in performing a chemistry experiment called "Elephant's Toothpaste," which is a popular demonstration in the LLNL Fun with Science Program. 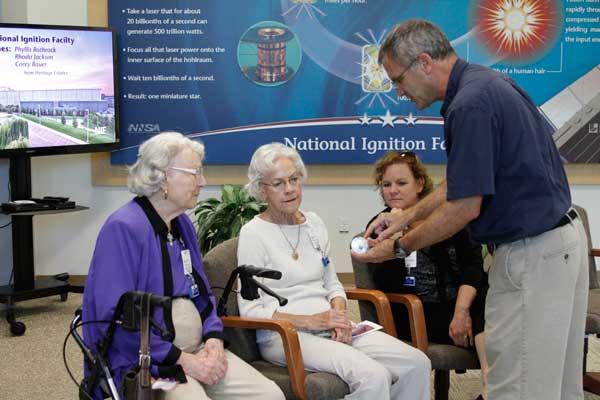 Leisure Care, the company that manages Heritage Estates along with other communities,  instituted a program called "Wish Makers," where they compete to see which community can grant the most wishes of its residents.

The senior residents are encouraged to make a list of wishes. However, Rothrock had only one, to tour the Lawrence Livermore National Laboratory. When asked why she wanted to tour the Laboratory, she simply stated, "to see the atom splitter and the Lab that makes the new elements."

Rothrock is no stranger to science. She attended Purdue University, graduating with a bachelor's degree in chemistry in 1942 and continued her education at the University of Southern California receiving her master's degree in education on the Ford Fellowship in 1967.

Rothrock was accompanied on the tour by her friend Rhoda Jackson, and Heritage Estates Activities Director Corey Bauer. When asked at the end of the day her thoughts on the tour, she said it was "more than awesome."