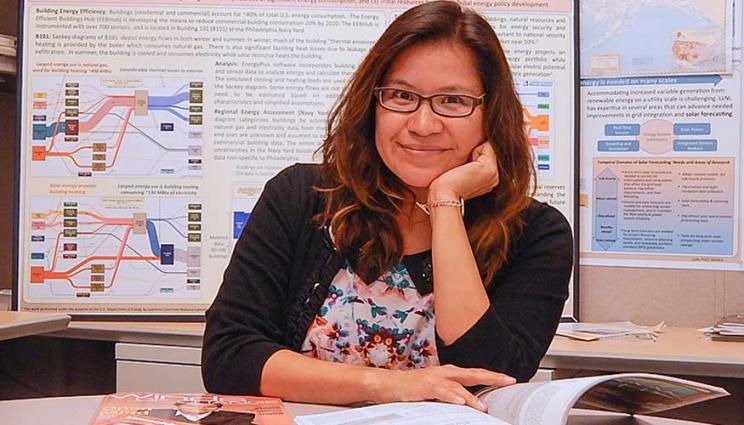 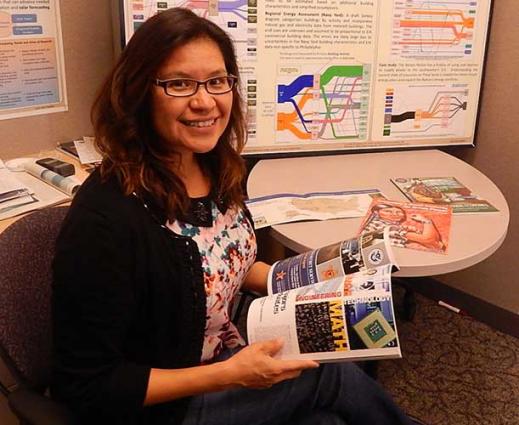 Suzanne Singer wants to use LLNL's capabilities to help tribes advance their energy security and development.

Tiny wood-frame and dome-shaped hogans dot the landscape of the Navajo Nation's reservation in the Southwest. Around them are natural wonders such as canyons carved into the earth billions of years ago and plateaus that rise in the horizon, revealing layers of geological rocks from ancient time periods.

But amid the beauty are the harsh realities for some Navajos living on a 27,425-square-mile Indian reservation - the nation's largest - that occupy portions of Arizona, New Mexico and Utah. Their homes don't have electricity, running water or indoor plumbing.

With her expertise in renewable energy, building efficiency and energy infrastructure, Lawrence Livermore National Laboratory Engineer Suzanne Singer is working passionately to bring sustainable energy to tribes around the country.

"There is a great potential for renewable energy on tribal lands, and I want to be able to use my technical skills to support advancements and developments in this area," Singer said.

Her passion comes from her roots.

Singer, a postdoctoral researcher who works in the Computational Engineering Division, is a Native American whose parents are both from the Navajo Nation. It has always been her goal to improve the lives of native communities using knowledge she gained from her science, technology, engineering and math (STEM) education and engineering experience.

"I spent a lot of my childhood at my grandparents' homes on the reservation," Singer said. "They lived in a rural area with no access to grid-tied electricity or indoor plumbing. I didn't realize until later what impact energy makes on the tribes. While tribal lands contain an estimated 5 percent of the nation's renewable energy resources, it's surprising that up to 40 percent of the residents in Navajo country don't have access to electricity."

Since joining the Lab in 2011, Singer has worked on projects to develop renewable energy infrastructure such as solar power and building energy efficiency. She's applied her knowledge from these projects to help solve tribal energy problems as a technical adviser to the Tribal Clean Energy Resource Center (TCERC) -- one of LLNL's partnerships -- and an organization developed by Northern Arizona University dedicated to helping Native American tribes and Native Alaskan villages transition from fossil fuels to clean and renewable energy.

"Ultimately," Singer said, "it's critical to provide a reliable energy infrastructure to Native Americans who don't have access to electricity and other basic needs."

Singer, 34, had no shortage of inspiration in her life. Soft-spoken and affable, she grew up in Flagstaff, Arizona, not far from the Navajo reservation, where her parents were raised. They grew up on a rural parcel of land in which they made do without power, running water or indoor plumbing.

It was a hard life, but both of her parents used STEM education to lift themselves out of poverty and achieve careers in prestigious fields. They instilled a sense of hard work, leading Singer to pursue an engineering career.

"I really enjoyed math when I was a kid," she said. "Growing up, I got to see my mom use programming as a tool to make maps of the moon and planets, and my dad is an engineer and very hands on with electronics. They were amazing."

Singer attended the University of Arizona, where she studied heat transfer and earned a bachelor's degree. in mechanical engineering. She later went on to graduate school at UC Berkeley, where she investigated microscale heat transfer of nanostructured materials to improve thermoelectric device efficiency for power generation and refrigeration. She eventually obtained a master's degree and Ph.D. in mechanical engineering.

During grad school, she began to realize how she could help the tribes. Singer completed an internship at Sandia National Laboratories under the Department of Energy's (DOE) Tribal Energy Program, learning about project development on tribal lands and researching concentrated photovoltaics (PV). The programoffers education and training opportunities designed to foster clean energy technology adoption, promote green jobs and growth and strengthen native communities. It inspired Singer to help her own people.

She ended up at Lawrence Livermore after meeting Randy Pico,Engineering Directorate senior superintendent, at an American Indian Science & Engineering Society (AISES) national conference. Pico, who is of Native American ancestry himself, followed Singer's progress at Berkeley and told her about opportunities at the Lab.

"If I didn't meet Randy, I would not have considered working at the Lab," Singer said. "Seeing him year after year showed how dedicated the Lab was to creating a diverse working environment."

A major project Singer worked on at LLNL was the Energy Efficient Buildings (EEB) Hub, a DOE-funded five-year research initiative in Philadelphia that aimed to improve energy efficiency in commercial buildings by 20 percent or more.

"The overall goal was to identify where the building's major energy consumption was happening," she said, adding that her research was conducted using the EEB Hub's headquarters building. "Seasonal, heating or cooling is needed to balance energy losses resulting from heat exchanges through exterior surfaces, especially from infiltration."

Infiltration and exfiltration is the transfer of energy through things such as cracks in the building, opened windows, poor insulation, etc., that reduces the building's overall energy efficiency. Singer and her project colleagues used simulation data from software called EnergyPlus and metered data from the building to produce a Sankey diagram to help visualize the facility's energy flow and consumption of solar energy and electricity.

Sankey diagrams, which LLNL is well known for generating, depict energy flows from source through use and ultimate disposition, and a vast amount of data in a visually informative way.

Singer also was a big part of a successful Lab-industry partnership proposal on solar energy integration and building energy management. In 2013, the California Energy Commission (CEC) awarded $1.7 million to fund a partnership between the Lab and Cool Earth Solar Inc. to conduct a community-scale renewable energy integration demonstration project at the Livermore Valley Open Campus.

When awarded, Singer plans to work on incorporating Cool Earth's concentrating solar PV technology with forecasting methods to predict power output. Her proposed methodology is toanalyze predicted solar irradiance hitting the module, accounting for system losses, and estimating the actual power generated.She also will evaluate how a building's energy performance will adapt to an integrated solar energy model by examining its heating, ventilation and air conditioning systems. The goal is to design more efficient systems for buildings.

Finally, she's working on an ongoing project to produce Sankey diagrams to analyze energy data and life cycle flows on tribal lands. The charts also can depict other factors such as water use and climate for more than 500 tribes in the U.S.

"I think it would surprise people to know that a lot of energy resources are located on tribal lands," Singer said. "These resources include fossil fuels such as oil and coal and renewables such as solar and wind."

The Department of Interior estimates that the total technical potential on tribal lands for electricity generation from utility-scale rural solar resources is about 14 billion MWh, or 5.1 percent of total U .S. generation potential.

"The Sankey diagrams will be used to help tribes make informed decisions about their energy policies," Singer said. "Every tribe is different.They have different needs and priorities, and varying access to resources."

Singer is working to connect Lab capabilities with tribal needs, while LLNL will continue to expand its involvement with the Navajo Nation and other tribes. DOE policies and initiatives between the National Nuclear Security Administration (NNSA) labs, tribes and educational entities provide a path for laboratory contractors to assist on tribal issues relating to energy security and STEM education.

Some of the biggest issues facing tribes in their quest to develop a better energy infrastructure are costs, climate and having a highly trained workforce, Singer said.

However, with so much potential on tribal lands, she hopes to be part of the solution in giving all Native Americans access to energy.

"I am glad the tribes are striving for energy independence, because I believe it will lead to improvements in other sectors," Singer said. "This fuels my passion to make a positive impact on tribal communities."