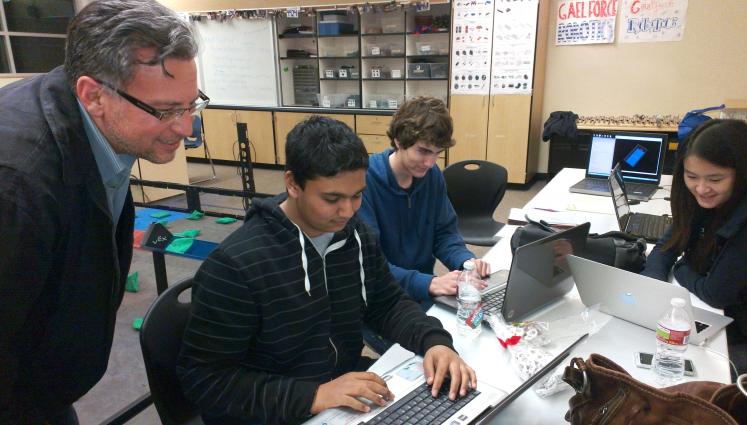 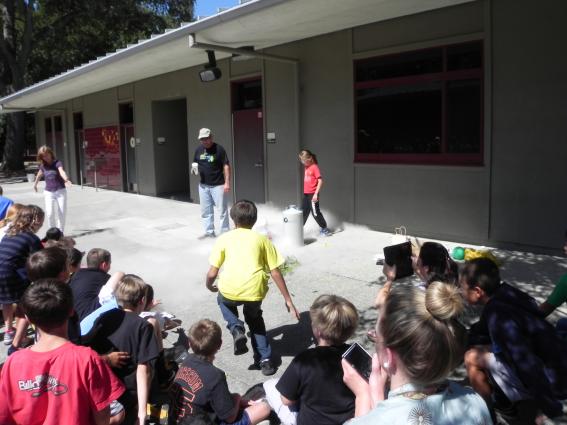 LLNL engineer Victor Castillo is demonstrating to schoolchildren how physical properties on common objects change when cooled with liquid nitrogen.

In his free time, he mentors students in science and technology, including computational science, robotics and additive manufacturing (AKA 3D printing), and helps teachers learn about these cutting-edge technologies.

A son of a Mexican immigrant, Castillo has become a role model with a message to students of all races. Growing up disadvantaged, Castillo worked his way through school, eventually earning a Ph.D. from UC Davis and landing a competitive research position at Lawrence Livermore.

He's been an inspiration to Hispanic schoolchildren. They see his lifelong achievements and realize they, too, can have a successful engineering career.

"I want to show disadvantaged kids that there is a very bright future for them in science and engineering," Castillo said. "Every student deserves a chance to succeed. Hopefully, I can make a difference in their lives."

Castillo's educational outreach efforts over the years were recently recognized at the national level.

He received the Community Service Award from Great Minds in STEM (GMiS), a nonprofit that focuses on science, technology, engineering and math educational awareness programs for students from kindergarten to career age. Castillo's award is part of the Hispanic Engineer National Achievement Awards Conference (HENAAC) recognition.

"I am honored and humbled to receive this prestigious award," he said. "It motivates me to continue and expand my outreach efforts with underserved schoolchildren."

The GMiS Community Service Award honors individuals who have a long history of community service and go above and beyond in reaching young people, fellow professionals, seniors and other key groups. Winners demonstrate leadership within the underserved and underrepresented STEM community through volunteer work, contributions and other activities that are not part of their current job description. Castillo will formally receive his award at the GMiS national conference in New Orleans in early October.

"Dr. Castillo stood out as a true champion and role model as demonstrated by his impressive body of work," said Anna Park, Chief Operating Officer (COO) and board member of GMiS, sponsor of the HENAAC awards.

Castillo began his involvement in STEM outreach early in his career. As a process-development lab technician at the Clorox Technical Center, he spoke to local high school students, judged local science fairs and wrote articles for educational use.

Since then, his outreach activities have gone on to include mentoring individual student projects in computational science; helping robotics teams from FIRST Lego League (FLL), FIRST Robotics Competition (FRC) develop an all-girl Turtlebot team; and giving talks about advances in additive manufacturing (also known as 3D printing) to local schools and colleges.

He earned his A.A. in industrial engineering from Las Positas College; B.S. in physics from San Jose State University (SJSU); and M.S. in computational physics from SJSU while working full time at Clorox, where he rose from technician to a senior scientist in the company's Pioneering Research Division.

He then went on to earn his Ph.D. in applied science engineering with an emphasis in computational physics from the UC Davis through the Lawrence Livermore Scholar Program, which paid for his tuition. He joined the Lab in 1998.

In his spare time, Castillo also volunteers at Robot Garden, a robot-themed hacker space in Livermore and at the Maker Barn at the Athenian School in Danville. Both are community educational resources that provide opportunity for hands-on engineering for students from K-12 and beyond. He is married with two children and lives in Danville.