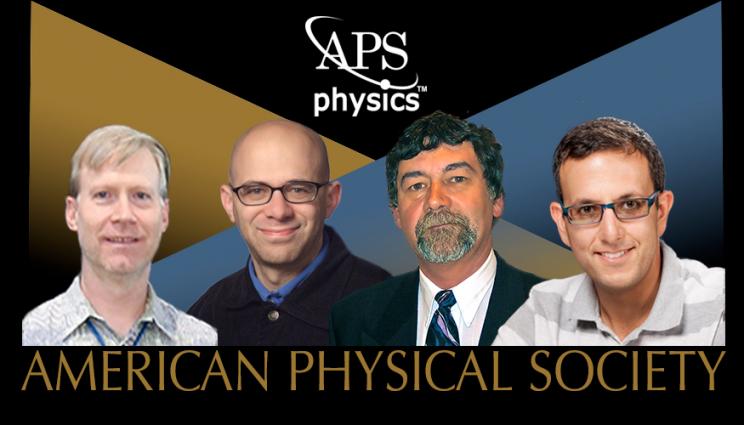 Election to APS fellowship recognizes the society member's exceptional contributions to the field of physics through research, leadership, applications of physics or contributions to physics education. APS fellowship is considered a distinct, prestigious honor because members are nominated and elected by their peers, and the number of APS fellows elected each year is limited to no more than one half of 1 percent of the membership.

Nathan Barton, currently the group leader of the Materials Modeling and Simulation Group in the Computational Engineering Division at LLNL, was nominated by the Division of Computational Physics for "diverse contributions in computational materials science in support of national security interests, especially related to novel state variable descriptions for material response under both static and dynamic conditions." Barton joined the Lab in 2004 after undertaking a postdoc appointment at the University of California, San Diego. Previously, he conducted research through the Deformation Processes Laboratory at Cornell University, with support from a National Science Foundation graduate fellowship.

"My original degree is in mechanical engineering, with my work evolving from materials processing to more general materials performance considerations," Barton said, "I sit at the interesting and challenging intersection of several different disciplines. I feel lucky that the Lab is so open to and so good at multidisciplinary collaboration, because that makes my work possible."

Laboratory Director William Goldstein was nominated by the Division of Plasma Physics for "leadership at the Lawrence Livermore National Laboratory with high levels of integrity, scientific judgment and national impact and for pioneering research in the theory of atomic processes in high temperature plasmas, with applications to fusion energy, astrophysics and X-ray lasers."

Goldstein is the 12th director of LLNL and has more than 29 years of experience at the Laboratory. Before his time as director, he served as the deputy director for Science & Technology, tasked with leading the strategic deployment of the Laboratory's science and technology capabilities. Prior to his appointment as deputy director, Goldstein was the associate director of Physical & Life Sciences, where he had responsibility for a broad range of physics research and development; medical physics and biophysics; chemistry; optical sciences and instrumentation, and high-energy density physics. During his tenure at the Lab, Goldstein has led the creation of the Jupiter Laser Facility and, in 2006, oversaw completion of Titan, a unique new Jupiter Laser Facility capability.

Goldstein was a postdoc research associate in the Theoretical Physics Group at Stanford Linear Accelerator Center after receiving his doctorate in theoretical physics from Columbia University in New York, and received a bachelor's degree in physics from Swarthmore College in Pennsylvania. He is a member of the American Physical Society, and sits on the board of directors of the National Science Foundation Center for Biophotonics Science and Technology at UC Davis. Throughout his career he has received numerous awards and has authored or co-authored more than 70 papers in the fields of elementary particle theory, nuclear physics, atomic physics, X-ray physics and plasma spectroscopy.

Physicist Robert Kirkwood was selected as a 2017 fellow by the Division of Plasma Physics (DPP) for "exceptional experimental work demonstrating the importance of energy transfer between laser beams in plasmas, and subsequent intellectual leadership of the effort to develop a two-color option on the National Ignition Facility laser that is important for achieving symmetric implosions."

Kirkwood received his bachelor’s and master’s degrees in electrical engineering from UCLA in 1982 and 1984, respectively, and his Ph.D in applied plasma physics, as well as the APS’s Marshall N. Rosenbluth Outstanding Doctoral Thesis Award from MIT in 1989. Kirkwood received the 2012 John Dawson Award from the APS for "predicting and demonstrating the technique of laser scatter on self-generated plasma-optics gratings that enables generation and redirection of high-energy laser beams important for indirect drive inertial conﬁnement fusion and high-power laser-matter interactions." For a recent example of Kirkwood’s research on plasma optics, see "Plasma Optic Combines NIF Lasers into ‘Superbeam.’"

Kirkwood joined LLNL in 1994 to help initiate the National Ignition Facility (NIF) program, after working for Caltech and the Air Force Phillips Lab. He led experiments on multi-beam interactions that led to wavelength tuning of drive symmetry on NIF and current models of multi-beam backscatter. He directed independent programs on plasma pulse compression and amplification and developed optical and X-ray diagnostics techniques for NIF.

"With so many of the scientists I most respect and admire among the ranks of APS fellows," Kirkwood said, "it is both gratifying and humbling to be tapped to join this group. The APS and the Division of Plasma Physics are among the most respected of the organizations that support the development of science. I have been fortunate that my collaborations with so many extremely talented scientists working in plasma physics and fusion, and the support of LLNL and DOE, have enabled accomplishments that merit this recognition from the APS."