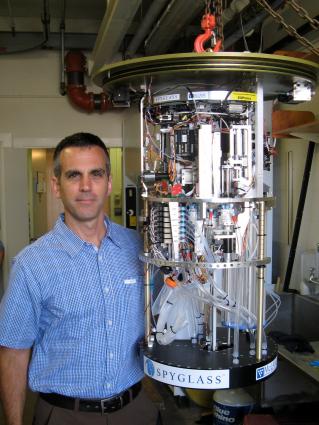 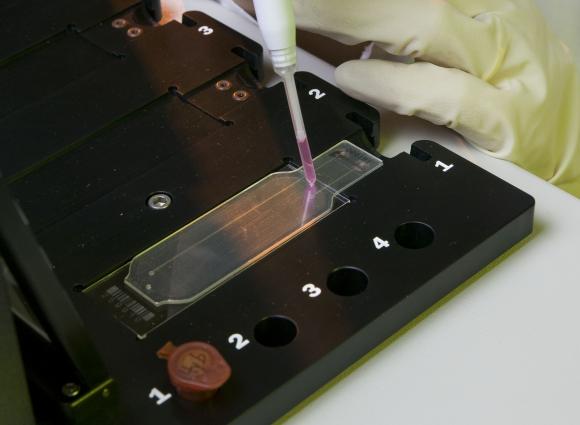 LIVERMORE, Calif. — A LLNL partnership that developed an environmental sampler that allows researchers to conduct biological analyses remotely in real time and a Lab technology that can detect more than 2,000 viruses and 900 bacteria in 24 hours have garnered two technology transfer awards in the Federal Laboratory Consortium’s Far West Region competition.

This year’s awards will be presented during the Mid-Continent and Far West regional meeting Aug. 31-Sept. 2 at the Snow King Lodge in Jackson Hole, Wyo. LLNL has won 12 (including this year’s) FLC Far West Regional Awards since 2007.

The ESP allows for use of DNA and protein array techniques and quantitative polymerase chain reaction (PCR) techniques to sense microbial community structure and detect specific genes and gene products remotely within an ocean observing network. Unlike typical molecular probe technologies that require returning samples to a laboratory for analysis, the ESP allows for analysis to be done remotely in real time.

There is worldwide interest in using ESPs to study ecological relationships among the thousands of marine microbe species, to detect harmful or toxic microbes for monitoring water quality and managing water resources, and to explore other areas of extreme environments. Data gained from ESP research will likely help scientists improve their understanding of Earth’s oceanic processes, many of which are strongly influenced by microbial communities. Members of the ESP team include LLNL’s John Dzenitis and Vincent Riot, Chris Scholin of MBARI, and Chris Melançon of Spyglass Biosecurity Inc.

Spyglass Biosecurity Inc. of San Francisco was awarded licenses from MBARI and LLNL. The U.S. Environmental Protection Agency (EPA) received the first commercial ESP unit from Spyglass in June 2010. This system, along with five additional ESP systems funded by the National Science Foundation, will be deployed by the Woods Hole Oceanographic Institution (WHOI) to monitor harmful algae in the Gulf of Maine. Catherine Elizondo has been the IPO’s business development executive for this partnership.

The outstanding technology award went to the LLMDA, which has shown value for applications in detecting bioterrorism events, product safety and diagnostics.

This device consists of probes fitted onto a one-inch-by-three-inch glass slide. Each probe tests for a particular sequence of DNA and small groups of probes can be used to check for specific bacteria or viruses.

The current LLMDA has been used to test for more than 2,000 viruses and 900 bacteria. The next generation LLMDA in development will expand that capability to 6,000 viruses, 2,000 bacteria as well as fungi and protozoa organisms. Any probe that detects its specific sequence will fluoresce, which will be read by a scanner and may indicate presence of that organism.

The LLMDA team analyzed the safety of rotavirus vaccines and in one case detected a benign pig virus. LLNL also worked with Sausalito-based Marine Mammal Center to diagnose diseases that have struck California sea lions and harbor seals .

Members of the LMDA team are Crystal Jaing, Shea Gardner, Kevin McLoughlin and Tom Slezak. Ida Shum of IPO served as the business development executive for the project.

FLC is the nationwide network of federal laboratories that provides a forum to develop strategies and opportunities for linking the laboratory mission technologies and expertise with the marketplace. The FLC Far West is one of six regions covering the United States. The Far West Region is comprised of 8 western states, Alaska, Arizona, California, Hawaii, Idaho, Nevada, Oregon and Washington. There are more than 100 federal laboratories and facilities in the Far West Region.