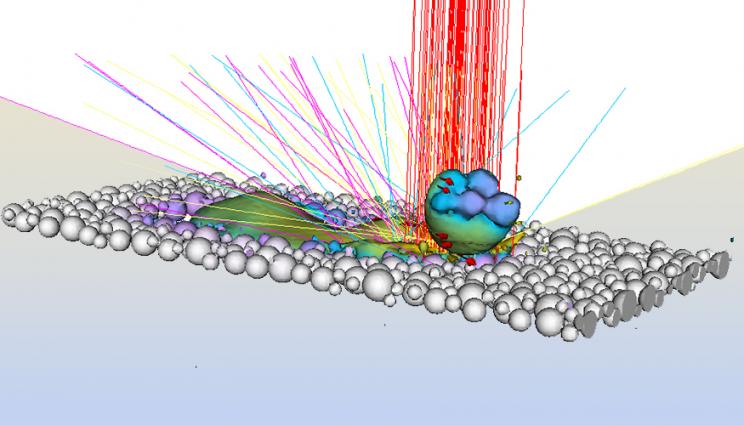 This simulation shows a laser interacting simultaneously with the melt pool and a large “spatter” of metal powder particles. In this event, the laser power was above a threshold that expelled the spatter away from the scan track. This prevented formation of defects due to “laser shadowing,” in which melted metal powder can block or eclipse the laser.

In work published by the journal Science, a research team at LLNL, along with collaborators at the Air Force Research Laboratory, reveal previously unknown dynamics involved in the laser powder bed fusion additive manufacturing (LPBF-AM) process, which uses a laser beam to melt metal powder layer-by-layer to form 3D parts. These newly discovered mechanisms produce “spatter” — particles or clusters of powder particles ejected from the laser’s path that can land back on the parts — potentially leading to pore formation and defects.

To better understand these laser-spatter interactions and the broader problem of certifying parts printed though LPBF-AM, LLNL researchers used computer models to create a “digital twin” of the process, which they used to perform virtual experiments of builds at the microscale. By comparing the simulations to experimental data captured using high-speed X-ray and optical imaging under LPBF-AM conditions, researchers developed a stability criterion resulting in a “power map.” The power map is a scanning strategy that adjusts the laser’s power output along the laser track to stabilize the melt pool and is a key building block for establishing “intelligent feed-forward,” a design process championed by LLNL that combines advanced modeling and simulation with experimental analysis to teach 3D printers to efficiently create parts without defects.

When utilized, the stability criterion can reduce or wholly eliminate the appearance of pores, keyholes (a deep and narrow melt pool) and other below-the-surface phenomena that can result in defects, researchers found. Additionally, they discovered that pre-sintering the metal powder — running a multibeam laser over the powder at a low power to fuse the particles together prior to the build — also can help reduce spatter and minimize the “snowballing effect,” where large spatter appears over the powder bed and becomes difficult to get rid of. Researchers said the strategy will improve overall part reliability and help enable wider adoption of additive manufacturing technologies.

“Spatter is the enemy of building nice parts; It’s not just small particles flying around, they can create a system of classes of spatter that can affect the build in different ways and scenarios,” said Saad Khairallah, the paper’s lead author and LLNL computational physicist. “People can’t just naively turn on their laser and start scanning, because the scan strategy can create spatter at the start of a track, beyond a size threshold, that can be very bad for the build. The good news is that by using this stability criteria that we describe in the paper, they can modify the scan strategy based on a controlled power map they apply to prevent that large back-spatter.”

The most popular metal 3D printing process, LPBF-AM employs a laser beam to scan 2D patterns over a flat bed of microscopic metal powder to form melt tracks that fuse with the lower layers, repeating the process thousands of times to produce a 3D object. Despite its apparent simplicity, the process still faces challenges for widespread adoption due in large part to the “variability” problem, where the same 3D printing machine, using the same powder and parameters, can generate parts with varying quality.

Taken alone, experiments cannot fully explain the dynamics behind the process, Khairallah said, because they often lack the required spatial and temporal resolution, and interpretation of the highly dynamical and transient LPBF-AM events observed experimentally, which necessitates advanced modeling. Complementing experiments with high-fidelity multi-physics simulations, Khairallah said, will allow researchers to capture what is happening at the powder bed level and below it in the melt pool, at very high speed, providing an indispensable tool for solving the variability problem and improving the part certification process.

To create the high-resolution models capable of simulating temperature, velocity and other aspects of the laser/melt pool interaction, Khairallah developed new capabilities in a LLNL multi-physics simulation code called ALE3D, to capture the impact of the laser’s rays on the expulsion of particles and other dynamics that generate defects such as “laser shadowing,” where melted metal powder can block or eclipse the laser.

By comparing the simulations to real-world experiments, the team concluded that shadowing creates a sudden decrease in the melt pool depth, which can create pores in the melt pool — the larger the spatter, the more shadowing that results. They also discovered a phenomenon of “self-replication,” where the laser hits a large spatter site (spatter sitting on the powder bed) and splits it, causing additional spatter sites to disperse over the powder bed and creating the snowball effect.

The intensity of the impact on the build is dependent on a certain threshold in laser diameter and power, the team found. High laser power is useful for expelling spatter that could block the laser, Khairallah said, but if the laser power is ramped up too quickly, or is too high, it can respectively produce large back spatter and keyholes. The power map the researchers devised dynamically adjusts the power along the track, finding a “sweet spot” that can keep the melt pool stable, expels spatter that blocks or shadows the laser and can prevent spatter from becoming too large.

“With our map, you can devise new scan strategies or adapt existing ones that maintain stability to prevent pores and defects,” Khairallah said. “In the future, someone could take this simulation model and run it for any scan strategy and figure out the optimum power they need to use along the scan track. If you’re doing a spiral or complex geometry, where the heat doesn’t dissipate quickly, it will tell you how to adjust the power at these bottleneck regions.”

To validate the simulations, researchers compared them to ultrafast X-ray imaging data recorded under in situ conditions at the Advanced Photon Source synchrotron at Argonne National Laboratory and high-speed optical images captured at LLNL.

“X-ray diagnostics provide the only techniques that can simultaneously probe the surface and sub-surface of the metal while also offering the fidelity to track the fast dynamics of laser-induced structural changes,” said co-author Aiden Martin, technical lead for the synchrotron experiments. “The use of X-ray imaging allowed us to experimentally observe the phenomena of spatter formation and shadowing explored in the ALE3D simulations.”

The capability for synchrotron-based X-ray imaging was provided by an experimental test bed developed under the Laboratory Directed Research and Development (LDRD) program and an existing LLNL ultrafast detector array that together enabled unprecedented temporal and spatial resolutions for probing sub-surface LPBF-AM phenomena.

“An exciting breakthrough of the project was the ability to collect data with comparable time- and length-scales to simulations of equivalent laser-metal interactions,” said Jonathan Lee, principal investigator of the X-ray research. “The synergy between LLNL experimental and modeling efforts was invaluable in developing new understanding of multiple LPBF-AM phenomena.”

The complex and nonlinear transient physics behind defects require full-fledged codes to model complex events, Khairallah said. The criteria the team developed can be adopted by commercial codes, researchers said, and could be implemented into any metal 3D printer and could also apply to laser or beam based welding or fusing technologies.

The high-fidelity modeling of thermal history and hydrodynamics using ALE3D forms the basis of a “digital twin” representation of AM materials, one of the main themes in a LDRD-funded Strategic Initiative aimed at controlling solidified microstructure and mechanical properties.

“Local control of energy input to the system using validated models opens up pathways not only to defect mitigation but to material enhancement through microstructure engineering,” said Manyalibo “Ibo” Matthews, principal investigator of the Strategic Initiative LDRD and project lead for the Lab’s Accelerated Certification of Additively Manufactured Metals project.