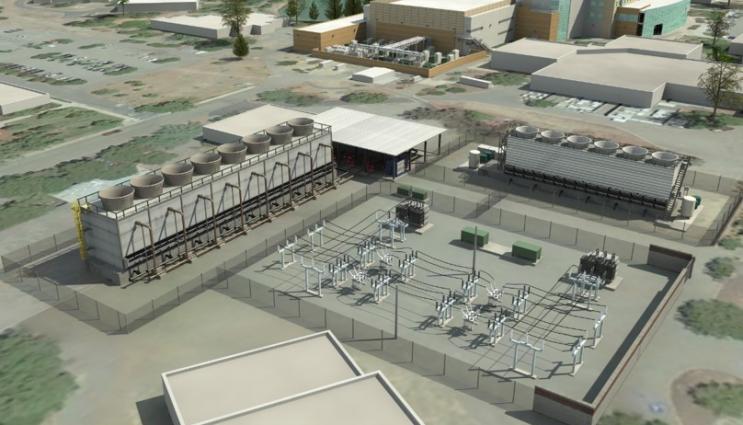 Scheduled for completion in 2022, the Exascale Computing Facility Modernization project will upgrade the Livermore Computing Center by significantly expanding the facility’s power and cooling capacity in preparation for delivery of next-generation exascale supercomputing hardware.

To meet the needs of tomorrow’s supercomputers, the National Nuclear Security Administration’s (NNSA’s) Lawrence Livermore National Laboratory (LLNL) has broken ground on its Exascale Computing Facility Modernization (ECFM) project, which will substantially upgrade the mechanical and electrical capabilities of the Livermore Computing Center. The upgrades will enable the facility to provide exascale-class service (supercomputers capable of at least one quintillion calculations per second) to the NNSA laboratories: LLNL, Los Alamos and Sandia.

Commissioned in 2004, LLNL’s computing center has housed some of the world’s largest, fastest and most advanced classified systems, but supporting next-generation high performance machines will require NNSA facilities to exceed their current capacities for power and cooling. Due to the COVID-19 pandemic, an official groundbreaking ceremony was canceled. However, construction crews have begun working to expand the facility’s system capacity in anticipation of new computer designs with increased requirements across an array of factors, including number of processors per system and density of processors per rack.

“As NNSA scientists and engineers continue to work diligently to address our aging nuclear arsenal and counter emerging threats from America’s adversaries, they will need vastly more powerful tools than we have today,” said Lisa E. Gordon-Hagerty, Department of Energy Under Secretary for Nuclear Security and NNSA administrator. “We are excited to lay the groundwork for this next stage in the evolution of world-class supercomputing and prepare the infrastructure for the unprecedented level of computing power that will be crucial to achieving our mission goals.”

The last phase of the ECFM project is scheduled to end in July 2022, but will be substantially completed by November 2021 so crews can begin a separate infrastructure preparation package for siting the HPE system El Capitan to the newly installed ECFM capabilities. Based on current available information, El Capitan is projected to be the world’s fastest supercomputer at more than 2 exaFLOPs (2 quintillion — or a million trillion — calculations per second) by mid-2023.

“We are very pleased that this project has broken ground, as it is an essential part of NNSA’s plan to deliver an advanced exascale environment to the complex,” said LLNL Lab Director Bill Goldstein. “Providing exascale capabilities by 2023 will enhance the country’s efforts on a major, time-critical weapons modernization project and serves as a reminder of the nation’s commitment to leadership in high performance computing.”

Over the course of the project, the facility’s existing cooling system will expand from 10,000 tons to 28,000 tons by adding cooling tower capacity, including required piping and pumps. The current electrical system will be upgraded from 45 megawatts (MW) to 85 MW for high performance computing, including 115 kilovolt transmission lines, switches, substation transformers, switchgear, feeders and secondary substations in the building.

The upgrades will allow LLNL to optimally run future supercomputers capable of regularly performing the high-fidelity 3D modeling and simulation necessary to meet the increasingly challenging certification requirements of NNSA’s Stockpile Stewardship Program and its mission to enhance the capability of the nation’s nuclear deterrent.

“In the absence of underground testing, current and planned modernization programs will depend heavily on exascale systems to assess weapon performance across the full range of environments a warhead will encounter,” said Kim Budil, principal associate director of the Weapons and Complex Integration directorate at LLNL. “In addition, these computers will provide improved confidence in safety assessments and deliver advanced modeling to optimize production processes. Exascale computing will make 3D modeling a routine part of the vital assessment process.”

The construction is being performed by Nova Probst, consisting of firms Nova Group, Inc. and Probst Electric. Both companies are subsidiaries of Quanta Services, a Fortune 500 company and one of the leading utility contractors in the United States.

ECFM is not the first project that Nova-Probst has performed to support LLNL’s high-performance computing mission. The firm recently completed the Expand Electrical Distribution System project at LLNL as the main contractor, completing the complex electrical utility project on schedule and under budget. This project provides reliable and efficient electrical distribution systems with sufficient electrical capacity to support current and planned operation at LLNL, with a provision for power expansion to support future Livermore Computing’s unclassified supercomputing needs.

With additional power resources, LLNL can continue to leverage its preeminent national security computing capabilities and respond immediately and aggressively to such challenges as the current COVID-19 threat.