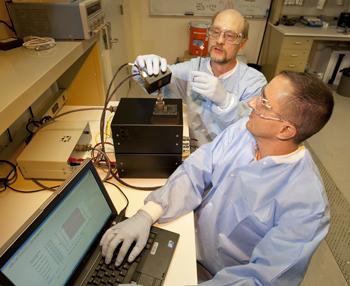 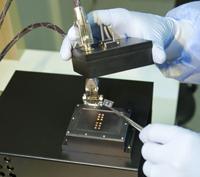 A scientific paper written by a team of LLNL researchers and engineers was the most-accessed article for the month of August for the international journal Analyst .

The paper, describing a device for the sub-three-minute amplification of nucleic acids (DNA and RNA) using polymerase chain reaction (PCR), was written by a team that includes lead author and chemical engineer Elizabeth Wheeler and corresponding author and scientist Reg Beer.

Out of 70 papers published as "advanced articles" online by the Analyst in August, the Wheeler-Beer team paper -- "Under three-minute PCR: Probing the limits of fast amplification" -- was the number one most-accessed paper.

"Anything that can improve on a technique that is as broadly used as PCR is going to be of importance," said Vibhuti Patel, deputy editor of Analyst. "The potential application in doctor's offices is very interesting and could make this scientific technique much more widespread."

The standard approach to PCR typically takes about an hour, which is a vast improvement over pre-PCR techniques that required days. However, PCR for point-of-care, emergency-response or widespread monitoring applications needs to be faster still -- on the order of a few minutes, as the LLNL team has achieved.

"We've been pleased with the strong interest this article has generated and the reception our technology has been receiving in the media," Beer said.

Analyst is published 24 times a year by Cambridge, United Kingdom-based RSC Publishing, which is part of the Royal Society of Chemistry, a not-for-profit organization for advancing the chemical sciences.

To date, the Lab's sub-three-minute PCR technology has been reported on by a number of media outlets, including the CBS national radio network, The Osgood File, Scientific American and Bay Area televisions stations Channel 7 (KGO, San Francisco) and Channel 11 (KNTV, San Jose).