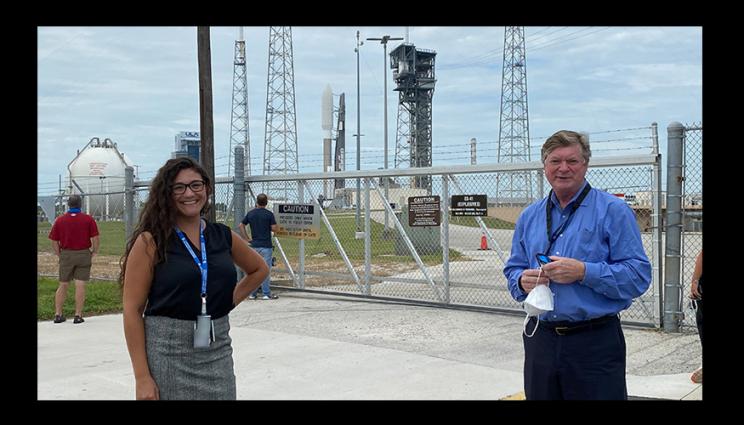 The pair, Steve Homann and Jessica Osuna, researchers in the Lab’s National Atmospheric Release Advisory Center (NARAC), part of the Nuclear Emergency Support Team, were in the Kennedy Space Center’s radiological control center in the unlikely event that there was a problem during launch with the rover’s plutonium-238 (Pu-238) nuclear power source.

Homann and Osuna were part of a seven-scientist team from National Nuclear Security Administration (NNSA) sites, including the Remote Sensing Laboratory at Nellis Air Force Base in Nevada and the Savannah River Site.

“I love astronomy, so this is a labor of love,” said Homann, a health physicist who is the senior science adviser for radiological contingency planning and was working with NASA in that post for the third time in the past 15 years.

“It’s been a thrill to work with NASA and both Jessica and I are excited about playing roles in the Mars mission. This is a wonderful capstone to my 42-year career at the Laboratory.”

For Osuna, an atmospheric scientist who is working with NASA for the first time and serving as the NARAC scientist for radiological contingency planning, her Mars mission work is something she never expected to do.

“Like many children, I wanted to be an astronaut when I grew up. Then I began college majoring in aerospace engineering, so working on this project has been a wonderful experience and will probably be as close as I get to space. I have especially enjoyed working on an interagency team with NASA and the U.S. Air Force 45th Space Wing Weather Squadron through the process of preparing for launch,” she said.

On Wednesday, the day before the launch, Homann, Osuna and other NNSA researchers met with NNSA Administrator Lisa E. Gordon-Hagerty at a nearby facility.

The Perseverance rover is part of NASA’s Mars Exploration Program, a long-term effort of robotic exploration of the red planet.

The rover will make a seven-month journey to Mars and is expected to land on Feb. 18, 2021. It will conduct geological assessments of its landing site on Mars, determine the habitability of the environment, search for signs of ancient Martian life and assess natural resources and hazards for future human explorers.

Perseverance will be powered by a multi-mission radioisotope thermoelectric generator (or MMRTG), about the size of a small dishwasher, that provides electrical power by converting the heat produced by the decay of Pu-238 fuel into electricity using devices called thermocouples. Thermocouples have been used in MMRTGs for a total combined time of more than 300 years, and not a single thermocouple has ever ceased producing power.

In their work, Homann and Osuna will produce computational simulations of potential Pu-238 atmospheric transport in the unlikely event of a release during launch. They will receive measurements from 30 Environmental Continuous Air Monitors (ECAMs) spread out north, south and west for about 40 miles from the launch site.

The ECAMs will check the air for Pu-238 and the air concentration measurements will be telemetered to a satellite and then be sent to the NASA radiological control center. If there was a Pu-238 release, the Lab scientists would be able in near real-time to determine if there was a hazard and quantify it.

“The bottom line of us being here is that in the unlikely event of a Pu-238 release, we would provide the technical basis for determining measures to protect the public,” Osuna said.

Homann and Osuna were supported by a “home team” of scientists, led by NARAC Operations Team Leader Brenda Pobanz, that came in to the NARAC operations center at 9:30 p.m. Pacific time Wednesday, and worked through the night in preparation for the 7:50 a.m. Eastern time launch Thursday.

The Livermore-based NARAC researchers, including atmospheric scientist Phil Vogt, environmental engineer Kristen Yu and computer support technician Lourdes Placeres, performed atmospheric plume simulations leading up to launch, and were prepared to run further simulations if there were any Pu-238 releases.

During a phone interview Tuesday, Osuna noted that in the run-up to today’s launch, the NARAC home team had provided “amazing” support for the mission.

“They have been awesome. They have provided situational awareness technical updates twice a day since the MMRTG was installed in the spacecraft and are providing six technical assessments of potential accidental release scenarios during the launch countdown,” she said.

Homann and Osuna have been working closely with NASA researchers and the Air Force 45th Space Wing in Florida in preparation for the launch for more than a month, since arriving there June 21.

Their preparations also have been significantly longer as the duo started working with NASA in 2016 to put together the radiological contingency plan for today’s launch.

This is Homann’s third launch as senior science adviser, including the Mars Science Lab in November 2011 and the New Horizons spacecraft launch to Pluto in January 2006. He also has been a health physicist for the Cassini, Galileo and Ulysses space flights.

Since 1989, NARAC scientists have supported eight NASA missions in which the spacecraft has carried a radioisotope thermoelectric generator.