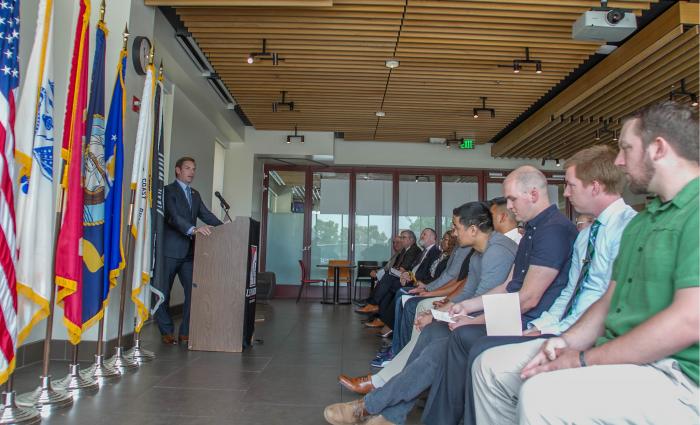 Congressman Eric Swalwell congratulated the group on their achievements and encouraged them to continue pursuing their goals while using their successes to lift up other veterans who are transitioning back into civilian life. Photos by Julie Russell/LLNL

On Tuesday, Diaz was among eight student-veterans honored as the first graduating class of the academic program, a partnership of the Lab, the college, the Alameda County Workforce Investment Board and the nonprofit, Growth Sector. The unique program offered summer internships at the Lab to veteran/students as well as training in advanced manufacturing, biotechnology, lasers and national security-related projects. Diaz has not only finished the 24-month program, he’s already accepted a full-time job in the Lab’s Materials Engineering Division, starting in June.

"(The program) allowed us to build a bond we only had in our platoons or wherever we might have been," Diaz said. "We built a brotherhood. I felt like I was deployed with these guys. It’s brought us together, and it’s succeeding."

The celebration, held at the college, brought together local politicians, college administrators and teachers and Lab employees who played instrumental roles in getting the program off the ground.

Congressman Eric Swalwell congratulated the group on their achievements and encouraged them to continue pursuing their goals while using their successes to lift up other veterans who are transitioning back into civilian life.

"You’re on your way to serving your country in another way," Swalwell said. "We have a responsibility to those who served our country to be as collaborative and of service to you as you were to us. I think that remains our challenge." 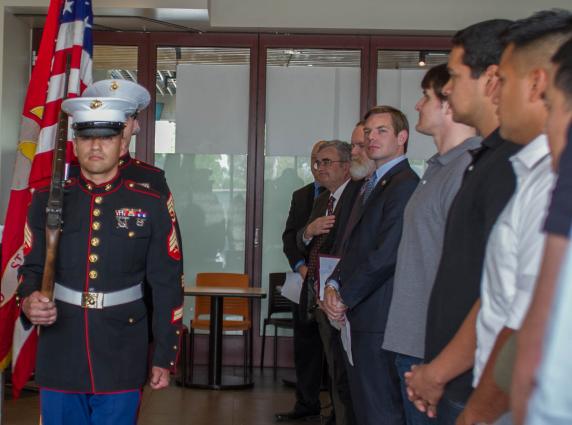 Noting the aging workforce and the need to attract new skilled employees, Livermore Mayor John Marchand credited the collaboration with successfully combining the assets of the national labs with the college and the local veteran population.

"This program is bridging the gap for those veterans who are serving our country in our armed forces and now in our community," Marchand said.

While the inaugural cohort doesn’t officially graduate until May 27, many of the veterans will be working at the Lab in some capacity beginning next month.

Ryan Kelly, a Marine Corps veteran who interned at the High Explosives Applications Facility last summer, said he plans to work part time at LLNL for the next few years while he attends San Jose State for a bachelor’s degree in mechanical engineering. Eventually, he wants to continue his career at the Lab.

"I’ve been locked into my own little world for so long with studying that for me (today) was kind of like closure," Kelly said. "It was really cool to see all the (program leaders) here and that everybody was pleased with the success."

Recognizing the inaugural cohort’s achievement and the collaboration that made it possible was a proud moment for Engineering Senior Superintendent Randy Pico, a military veteran's son who helped start the program.

"These veterans did phenomenal jobs during their internships," Pico said. "Many will be working at the Lab, and we are honored to welcome them into our family."

LLNL is expected to hire about 300 engineering technicians over the next five years. Many of those jobs will go to veterans, said program co-founder and the Lab’s Engineering Recruitment and Diversity Manager Beth McCormick, who hopes the program will be a pipeline to the Lab for many years to come.

"We have workforce needs, so it’s perfect timing," said McCormick, who told the veterans "you changed my life, you changed the lives of many people and you will continue to change lives."

The group worked closely with Las Positas College’s Veterans First coordinator and program leader Todd Steffan, who was credited with guiding them through their education and reentry back into society. "I haven’t encountered a public-private partnership like the one we have with the Lab," Steffan said. "You’re not only setting a great example for our students and our community, but our industries as well. I’m proud to be a part of this collaboration, and I’m proud of our veterans." 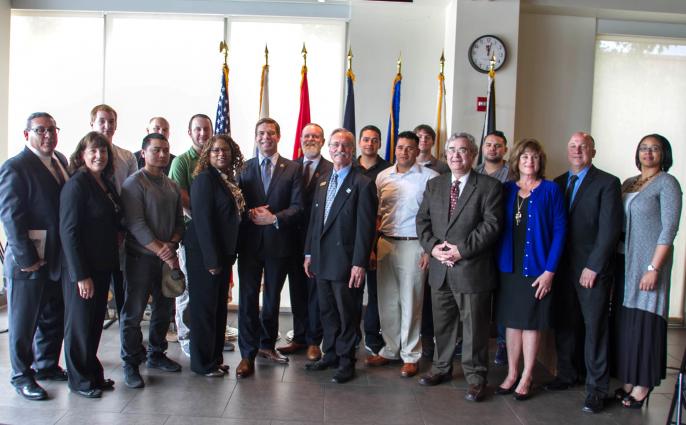