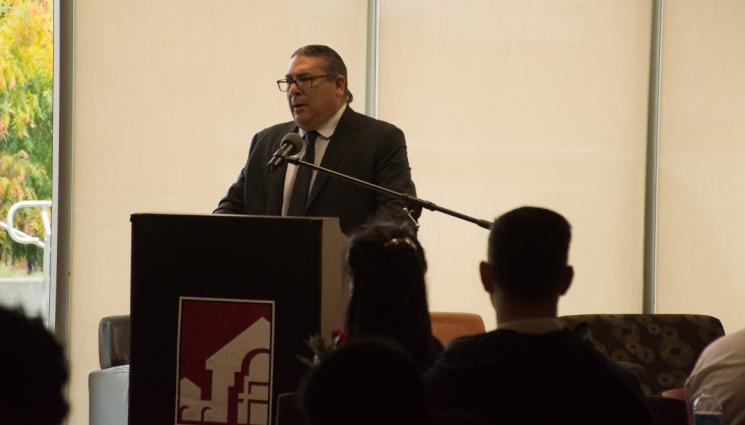 LLNL Engineering Directorate Senior Superintendent Randy Pico, who co-organized the Vets2Tech program, said graduates who have been hired at the Lab have consistently earned salaries 70 percent higher than the statewide average and multiple graduates have gone on to earn advanced degrees paid for by the Lab. Photo courtesy of Alan Lewis.

Lawrence Livermore National Laboratory (LLNL) leadership and employees, along with faculty, administrators and students of Las Positas College, gathered at the school on Dec. 4 to celebrate the five-year anniversary of the award-winning Engineering Technology Program (ETP), also known as Vets2Tech.

A partnership of the Lab, Las Positas, the Alameda County Workforce Development Board, the Tri-Valley Career Center and Growth Sector, the ETP began in 2014 with a mission to address the labor market shortage for mechanical technologists and to train military veterans for new careers. Instituted primarily to serve the student veteran population, it has since expanded to include civilian students. Over the five years, 44 students have earned associate degrees and 33 have secured full-time employment in the engineering field, 25 of those at LLNL, according to program organizers.

LLNL Engineering Directorate Senior Superintendent Randolph “Randy” Pico, a former LPC transfer student who co-organized the program, said over the years the Lab has provided more than 50 summer internships to LPC students. Graduates of the program hired on at the Lab have consistently earned salaries 70 percent higher than the statewide average and multiple graduates have gone on to obtain advanced degrees paid for by the Lab. In addition to being enriched, Pico said, the students have enriched the Lab as well.

Mary Lou Manzo, a graduate of the ETP program in 2017, is now a full-time technologist at LLNL. She said the program taught her the math and engineering skills she needed to succeed in her job, particularly through her internship experience.

“Through that summer internship, not only was I able to see firsthand how everything we learned in class directly applies to what we do in the workforce, I was able to figure out the things I want to do,” Manzo said. “I wouldn’t be standing here today if it wasn’t for the program, the Lab and the people supporting it.”

Livermore Mayor John Marchand and representatives from the offices of Rep. Eric Swalwell, State Sen. Steve Glazer and Assembly member Rebecca Bauer-Kahan attended the event. Marchand spoke about the impact of the program on the Livermore community as “more evidence that Livermore is on the leading edge where innovation and economic development come together.” Vets2Tech, he added, is “bridging the gap between veterans serving in our armed forces and succeeding in the local workforce.”

“The Las Positas College programs are currently serving hundreds of veterans as they build and develop their skillset to transition to civilian life,” Marchand said. “The key to this engineering program is that it provides a high-quality and relevant curriculum to meet the needs of tomorrow’s dynamic workplace.”

Nan Ho, Las Positas College’s dean of science, technology, engineering and math (STEM), said the ETP has provided veteran students with exposure to careers and a network involving the Lab, small businesses and startups that they would never have otherwise had.

“It’s providing opportunities, giving them the support they need to succeed and getting them into a career that pays a livable wage. They’re coming out (of the military) and trying to figure out what to do, and we can take them in two years and have them be employed in the community; that’s phenomenal,” Ho said. “This event is really about celebrating how many people it took to make this work.”

Las Positas’ Engineering Technology Program and Veteran’s Center Coordinator Todd Steffan described working with LLNL’s Beth McCormick to institute the Vets2Tech program with the first cohort of student veterans, one of whom is currently a mechanical engineer at the Lab and pursuing a master’s degree. He called the program a “perfect example of what makes LPC so special.”

“It’s when everything comes together — industry, the community and the college — all with one key objective — to develop our students to succeed, not just in the classroom but also beyond,” Steffan said.

“This program not only helped LLNL and its workforce, it also has become a model for many of the DOE labs and several large Bay Area companies,” McCormick said. “With the shortage of technologists across the country, the LPC students and graduates are in recession-proof careers that will always pay well.”

Following several talks and testimonials, the representatives from Bauer-Kahan’s and Glazer’s offices presented Las Positas College with certificates of recognition commemorating the anniversary of a “successful program” and five years of fulfilling its mission to “meet local demands for highly skilled workers in the field of engineering technology and to expand economic development in the East Bay.”

“This truly is something special,” said Dublin City Councilman Shawn Kumagai, who also is a district director for Bauer-Kahan. “It is a program that has responded to the needs of the community both on the student end but also in public and private industry.”