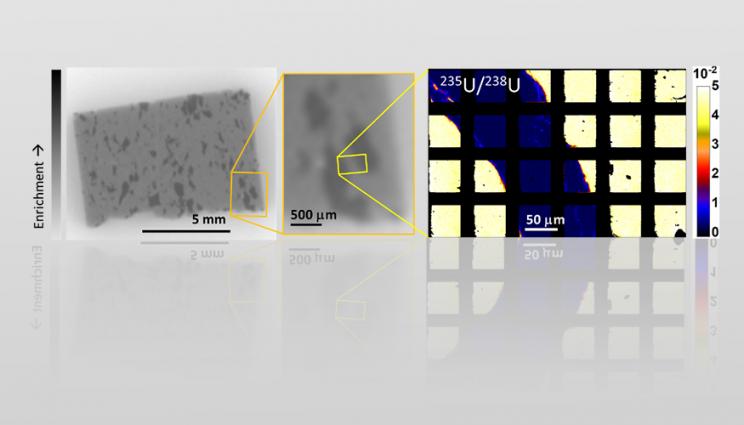 Uranium fuel pellet isotopic heterogeneity revealed by correlated microautoradiography (left and center) and tiled NanoSIMS isotopic analyses (right). Darker areas in the microautoradiograph and lighter colors in the NanoSIMS images indicate higher enrichment in uranium-235. This was one of two fuel pellets from the CMX-5 exercise, the other of which was made from the same mix of UO2 powders but was heterogeneous at a much finer scale.

The exercise was part of the CMX-5 Collaborative Materials Exercise organized by the Nuclear Forensics International Technical Working Group (ITWG). The exercise involved forensic laboratories from 19 countries and one multinational organization. The results appear in the Journal of Radiological Materials.

The exercise scenario involved seized nuclear materials for which law enforcement requested nuclear forensic analysis to help discern if the process histories of the two seized materials were consistent with one another and related to similar materials seized previously by authorities.

Within 24 hours, LLNL researchers identified unexpected uranium isotopic heterogeneity in particles from the fuel pellets. In the following weeks, the LLNL researchers used a combination of analytical tools to precisely characterize the distribution and spatial scale of this isotopic heterogeneity, as well as estimate the isotopic compositions of the starting uranium oxide powders used to prepare the pellets, providing law enforcement with clues about the process history of the materials. NanoSIMS imaging analysis allowed direct characterization of the spatial heterogeneity of the uranium isotopic composition of the fuel pellet and the relationship of that heterogeneity to crystal structure.

Uranium dioxide pellets are the most commonly used fuel type in nuclear reactors worldwide, with fuel fabrication facilities producing hundreds of uranium pellets per minute. Illicit trafficking of uranium dioxide fuel pellets is a reoccurring event. The majority of confirmed cases of trafficking of nuclear materials that were reported to the International Atomic Energy Agency Incident and Trafficking Database involved low-grade nuclear materials (i.e., natural uranium, depleted uranium and low enriched uranium), often in the form of reactor fuel pellets. These cases are indicative of gaps in the control and security of certain nuclear material and nuclear facilities. Fuel manufacturers can use different processes to fabricate fuel pellets, which can be used to trace the material back to the originating fuel fabrication facility.

“Our analyses provide a new level of detail on the manufacturing process, demonstrating how process information relevant to law enforcement can be extracted,” said LLNL chemist Peter Weber, a co-lead author of the paper. “This paper is a playbook of options for pursuing this new forensic signature in fuel pellets.”

“The ability to extract diagnostic signatures from fuel pellets is important in nuclear forensics because pellets are the most commonly smuggled material,” said Mike Kristo, co-author and LLNL lead for nuclear forensics.

The ITWG is a community of practitioners (scientists, law enforcement, regulators and policymakers) that seeks to identify, promote and disseminate best practices in the field of nuclear forensic science. This community of approximately 50 countries and multinational organizations is committed to combating trafficking of nuclear and other radioactive materials.

Other institutions that contributed to the publication include the Canadian Nuclear Safety Commission Laboratory, the Atomics Weapons Establishment in the UK, the Commissariat à l’Énergie Atomique in France, the Joint Research Centre of the European Commission based in Germany, the Laboratory for Microparticle Analysis in Russia, Pacific Northwest National Laboratory and the International Atomic Energy Agency Laboratories in Austria.