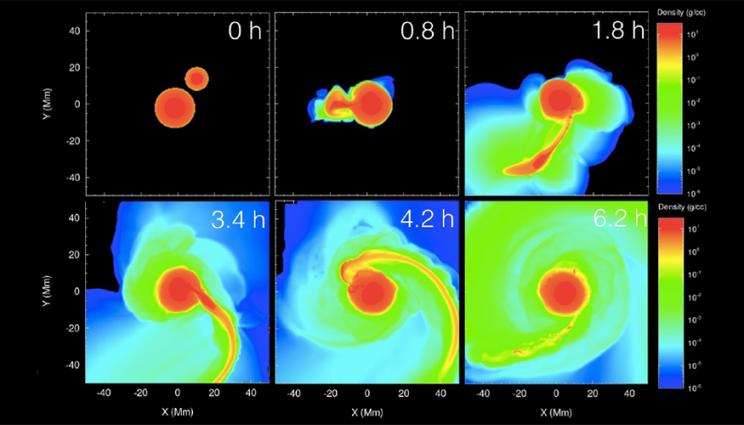 This simulation shows the collision of two celestial bodies, ejecting enough debris into orbit to form a moon large enough for the Kelper spacecraft to detect.

Kepler, don't give up on the hunt for exomoons

The Kepler spacecraft has been prolific in its search for planets outside our solar system, known as exoplanets, discovering thousands since its launch in 2009. But the hunt for moons orbiting these exoplanets, or exomoons, is vastly more challenging. While no exomoons have been found to date, a new study shows that the search is not futile.

Researchers have demonstrated for the first time that it is possible for a planetary collision to form a moon large enough for Kepler to detect.

Lawrence Livermore National Laboratory physicist Megan Bruck Syal and lead author Amy Barr of the Planetary Science Institute conducted a series of nearly 30 simulations to explore how various factors affect moon creation. In the end, they were able to narrow in on a set of conditions that would create satellites much larger than the Earth’s moon. The study -- "Formation of Massive Rocky Exomoons by Giant Impact" -- will appear in the May issue of the Royal Astronomical Society’s Monthly Notices.

"We weren’t modeling something that's been observed," Syal said. "This problem was more abstract, more theoretical. It took a while, but once we were able to generate these massive moons, we were pretty excited."

The leading thinking on the creation of Earth’s moon is that a planetoid the size of Mars collided with a smaller proto-Earth about 4.5 billion years ago, ejecting significant debris into orbit that consolidated into a disk and eventually the moon. The result was a satellite that is about 1.2 percent of Earth’s mass. But in order for an exomoon to be large enough for Kepler to detect with existing transit techniques, it would need to be at least 10 percent of Earth’s mass, according to detection criteria from the "Hunt for Exomoons With Kepler" project.

Previous research on the Earth’s moon considered factors like the angle of impact and the relative masses of colliding bodies. As the impact angle becomes more oblique, more material is injected into orbit. Similarly, as the two bodies approach equal size, the disk mass increases. But this study found that a third factor -- impact velocity -- also plays a crucial role in determining how large a moon an impact can create.

"Prior research has focused on a fairly narrow set of conditions, favorable to forming Earth’s moon," Syal said. "This is the first study to consider a much wider array of impact scenarios, exploring the full range of what may be possible in other planetary systems. There is a lot of uncharted territory."

Once impact velocity surpasses a certain threshold, the simulations show a precipitous drop in the amount of mass the disk can retain. By adjusting these three variables, Syal and Barr demonstrated a set of scenarios that would result in the creation of massive moons: A collision between like-sized objects that are two to seven Earth masses, at an oblique impact angle and velocity near escape speed can launch into orbit enough mass to create a satellite large enough to be detected in Kepler transit data.

In the future, when exomoons are successfully observed, results from this study can be used to constrain their individual formation histories.