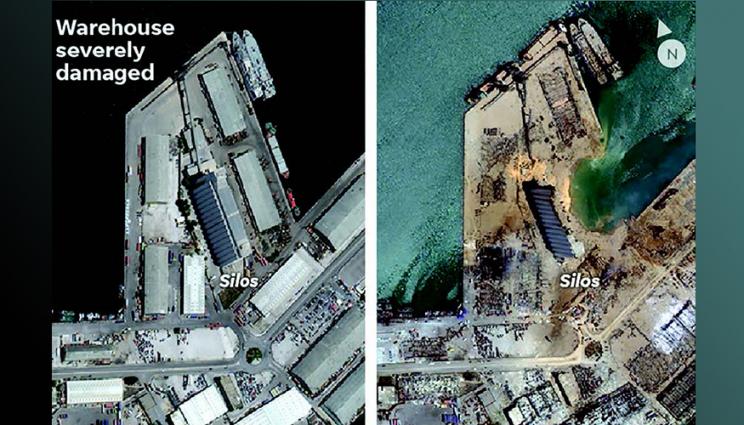 Just how big was the 2020 Beirut explosion?

On Aug. 4, 2020, one of the largest non-nuclear explosions in history pulverized a Beirut port and damaged more than half the city. The explosion resulted from the detonation of tons of ammonium nitrate, a combustible chemical compound commonly used in agriculture as a high-nitrate fertilizer, but which can also be used to manufacture explosives.

Since that time, the explosive yield estimates varied widely, and in some cases, were inconsistent with what would be expected based on the amount of ammonium nitrate stored at the Beirut harbor. In addition, the crater size, seismic magnitude and mushroom cloud height seemed to be inconsistent.

Lawrence Livermore National Laboratory (LLNL) physicist Peter Goldstein has studied how water saturation of the explosive, ground and possibly water and debris from the near-source environment can help reconcile differences in the yield estimates obtained using these different measurements. Official records indicate that roughly 2.7 kilotons of explosive material were stored at the Beirut harbor warehouse where the explosion occurred. The detonation of these materials resulted in a large crater and seismic measurements suggested it was possible that the yield was at least a few kilotons and possibly much greater. However, there were other estimates that suggested the yield was quite a bit smaller, possibly as little as half a kiloton.

Goldstein’s research, which appears in Countering WMD Journal, analyzes the crater dimensions, seismic magnitude estimates and the cloud height of the explosion and shows that all the data are consistent with a yield of around a kiloton when water/saturation is accounted for. “Water in the near-source environment can have a significant effect on many observations, including crater formation, cloud rise, seismic magnitudes and blast wave effects,” he said.

Goldstein used crater-size observations from satellite imagery and empirical data for scaled crater radii from past chemical and nuclear explosions to estimate the yield.

“The evidence suggests that the relatively large crater radius is due to a high degree of saturation of the ground beneath the explosion. It is likely that this saturation increased coupling of shock wave energy to the surrounding material and reduced the effective stress/strength of the material,” he said.

Confidence in the reliability of these models is critical for emergency response planning to mitigate potential consequences from accidents such as the Beirut explosion or deliberate acts that could involve improvised nuclear devices or radioactive dispersal devices.

This research also is relevant to nuclear explosions. It suggests that features of the near-source environment can have a large effect on shock/blast waves, seismic motions and crater formation, as well as cloud rise and fallout effects. The effects also propagate into things like the yield estimate. Goldstein said he expects near-source features like water to have a significant effect on other explosion phenomena, including radiation transport and post-detonation debris formation.

The research was funded by LLNL’s Laboratory Directed Research and Development program.