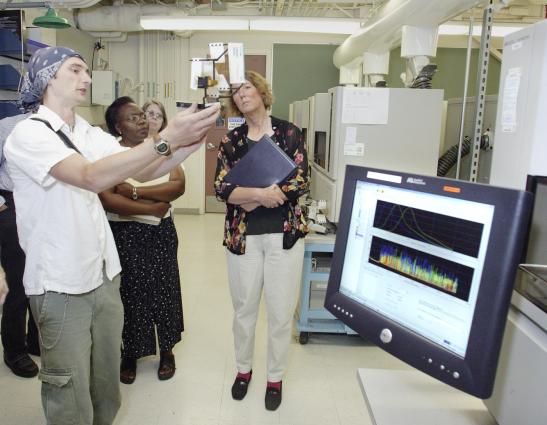 WALNUT CREEK, CA—Researchers are closer now to thwarting two related plant pathogens, one causing "Sudden Oak Death" (SOD) and another responsible for a devastating soybean disease, thanks to the DNA sequence produced by the U.S. Department of Energy (DOE) Joint Genome Institute (JGI), in collaboration with the Virginia Bioinformatics Institute (VBI). The projects received nearly $4 million in support from the U.S. Department of Agriculture (USDA), the National Science Foundation (NSF), and the DOE in this multi-agency effort.

"The ability to use large-scale multi-agency collaborations to rapidly characterize such economically important microorganisms is the cornerstone of the resource that we have established at the Joint Genome Institute," says Raymond L. Orbach, director of the DOE Office of Science, which funds operations of the JGI. "For both these pathogens, the genome sequence information will enable the identification of cellular processes that can be targeted for novel detection systems and for safe and effective means of chemical or biological control."

"The genome sequences for these two Phytophthora [pronounced Fy-TOFF-thor-uh] species provide a framework for understanding how these plant pathogens cause disease and what can be done to control them," says Joseph Jen, USDA’s Undersecretary for Research, Education and Economics. "USDA is pleased to be working with the Department of Energy and the National Science Foundation to jointly support the genome sequencing of these microorganisms."

"Phytophthora species attack a wide variety of plants, including agricultural crops as well as trees and shrubs of native ecosystems," explains Mary Clutter, NSF assistant director for the Biological Sciences. The projects to sequence the genomes of Phytophthora sojae, which attacks primarily soybeans, and Phytophthora ramorum, the pathogen causing Sudden Oak Death, "will contribute great value in combating these devastating diseases, and the success of these projects clearly demonstrates the value of agencies working together to address major scientific challenges," Clutter adds.

Sudden Oak Death was first reported in 1995, but the agent responsible for the disease was discovered by University of California scientists in 2000. The pathogen is known to be present in 13 California counties and also in Southern Oregon. It has also been detected at 125 nurseries across the nation, elevating concerns about the pathogen to an all-time high. Symptoms vary depending on the host. Infected oak trees exhibit bleeding cankers on the trunk, and often succumb to the disease or to secondary infections as they are weakened by P. ramorum. In foliar hosts, the pathogen reveals its presence through leaf blight and twig dieback. Foliar hosts serve as a vector for the disease, and include such plants as California bay laurel, camellia, and rhododendron.

The economic impact of Phytophthora sojae has been far-reaching. The United States produces almost half the world’s soybeans. Losses attributed to P. sojae infestation, known as Phytophthora root rot of soybean, a post-emergence disease of the field, exceeded $1 billion in 2003.

The aptly named genus Phytophthora derives its moniker from the Greek words for "plant destroyer." Part of a fungus-like group of organisms known as oomycetes, or water molds, they are relatives of such aquatic algae as diatoms and kelp. The pathogens survive as thick-walled spores that can persist in soil for years. Of the 59 recognized Phytophthora species, it was P. infestans that was responsible for the mid-19th century Irish potato famine.

"The sequencing of the P. ramorum genome represents the fastest tracking from identification of a new plant pathogen to the completion of its genome," says Brett Tyler of VBI. Tyler’s research group provided a genetic map of the P. sojae genome from which JGI was able to assemble the raw DNA sequence data. "Sequencing P. sojae will enable the past 15 years of advances in understanding the genetics of Phytophthora pathogens to be rapidly transferred to P. ramorum, in effect serving as the Rosetta Stone for sudden oak death.

"The genome sequence of P. ramorum will help researchers to track the spread of SOD much more accurately by enabling them to develop more detailed genetic fingerprints," says Tyler. "Based on experience with developing fingerprints for other organisms, including humans, researchers know what kinds of sequences to look for in the genome sequence — for example, simple sequence repeats. Accurate tracking of P. ramorum will help determine the routes of spread, and to answer the question more accurately as to whether P. ramorum can spread from nursery plants into the forest."

"Thus far, more than 30,000 genes have been identified in these pathogens," says JGI Director Eddy Rubin. The USDA is sponsoring additional applied research at the JGI that will exploit the sequence information for the development of rapid, more effective field detection systems for SOD. "This second-generation detection method relies on distinguishing traces of DNA sequences, or aptamers, to home in on substances released by the pathogen during infection," Rubin says. Aptamers are single-stranded DNA molecules that fold into three-dimensional structures and bind other molecules with high affinity and specificity.

A public biotechnology company, Affymetrix, headquartered in Santa Clara, Calif., has utilized the publicly available sequence generated by JGI and VBI to develop a GeneChip® Microarray containing probes to detect DNA transcripts of Phytophthora sojae for soybean gene expression research. The power of Affymetrix technology to package the entire expressed genomes of multiple organisms on a single array — host and pathogens in this case — affords scientists the ability to ask new biological questions. For example, gene expression in both soybean and Phytophthera can be measured during the pathogenic process. This would help identify genes from both organisms specifically involved in pathogenic mechanisms and host defense.

Phytophthora ramorum, with a genome size of some 65 million nucleic acid bases, or letters of the genetic code, was iteratively sequenced by JGI seven times to assure the quality of the data. Phytophthora sojae, at approximately 95 megabases, was sequenced nine times over. The sequences of these organisms can be found on the JGI portal at http://genome.jgi-psf.org/ramorum/ and at http://genome.jgi-psf.org/sojae/ .

More information on SOD can be found at the California Oak Mortality Task Force (COMTF) website: http://www.suddenoakdeath.org/ or by contacting the COMTF Public Information Officer Katie Palmieri at (510) 847-5482.

The Joint Genome Institute was established in 1997 as part of the Human Genome Project by combining the DNA sequencing resources from the three DOE national laboratories managed by the University of California: Lawrence Berkeley and Lawrence Livermore national laboratories in California, and Los Alamos National Laboratory in New Mexico. JGI has since extended the scope of its sequencing to whole-genome projects devoted to microbes and microbial communities, model system vertebrates, aquatic organisms, and plants. Funding for the JGI is predominantly from the Office of Biological and Environmental Research in the DOE Office of Science. Additional information about the JGI is available at http://www.jgi.doe.gov.