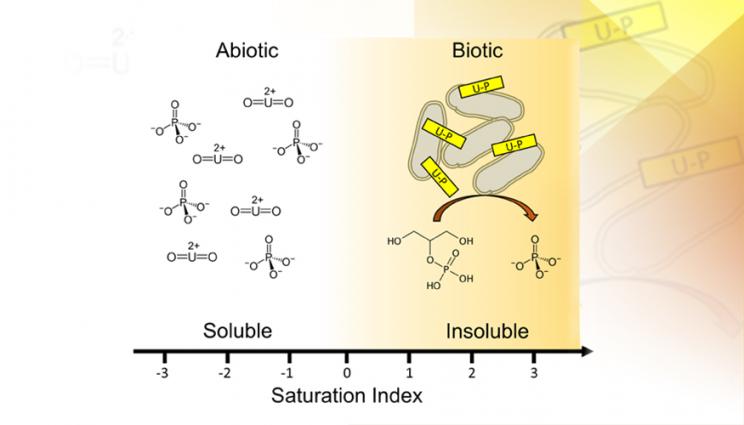 The coupling of microbial enzyme activity and surface adsorption of uranium can lead to the precipitation of highly insoluble uranium-phosphate minerals that do not precipitate abiotically.

Uranium contamination of soils and groundwater in the United States represents a significant health risk and will require multiple remediation approaches.

Remediation strategies for uranium-contaminated sites have been the focus of research for decades due to the former production of nuclear materials across the United States. The U.S. Environmental Protection Agency (EPA) has set the drinking water standard for uranium at 0.03 parts per million (ppm). Yet most bioremediation studies are rarely conducted at uranium concentrations this low.

It’s been almost 30 years since the discovery that microbial phosphatase activity and organic phosphate substrates could be used as a strategy to lower the transport of uranium by precipitating uranium-phosphate minerals. A wide range of microbial species have been found to facilitate this process in laboratory and field-based studies. However, these studies have all been conducted at uranium concentrations greater than 5 ppm and do not represent many contamination environments with low uranium concentrations (less than 0.5 ppm) and pH (pH less than 5) where mineralization is challenging.

In a new study by Lawrence Livermore National Laboratory (LLNL) scientists, the team showed that uranium-phosphate minerals do not form abiotically in solution when concentrations are less than 0.25 ppm and pH is less than 5, in contrast to previous studies conducted at higher concentrations. Instead, they found that bacteria present in soils and sediments can facilitate the precipitation of uranium-phosphate minerals that do not precipitate abiotically.

“The bacterial surfaces can facilitate the precipitation of uranium-phosphate minerals under these conditions by providing a local environment that is supersaturated with respect to uranium-phosphate minerals, leading to heterogeneous nucleation and mineralization,” said LLNL scientist Keith Morrison, lead author of the research appearing in Environmental Science and Technology. “This microbially mediated process can lower uranium concentrations below the EPA drinking water limit. These results should be valuable in guiding future microbially based uranium and phosphate-based remediation strategies where efforts are focused on more environmentally relevant uranium concentrations and pH ranges.”

Other Livermore scientists involved in the study include Mavrik Zavarin, Annie Kersting, James Begg, Harris Mason, Enrica Balboni and Yongqin Jiao. The work was funded by the Department of Energy's Office of Science, in part through an award under the Office of Science Early Career Research Program.