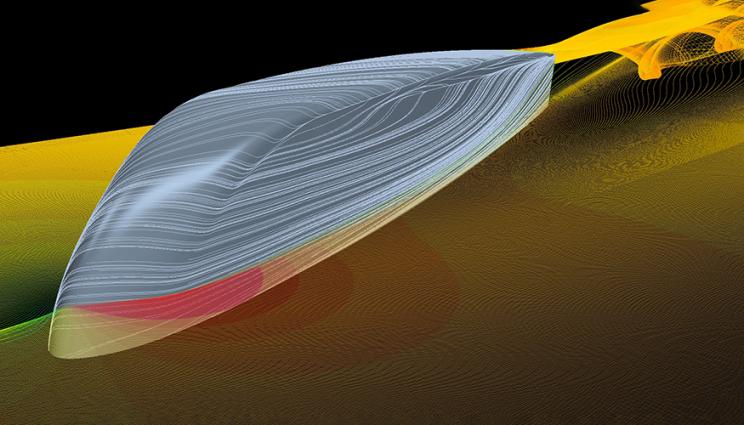 Reshaping the exterior of heavy vehicles, such as semitrucks, so that they are aerodynamically integrated along their entire length in a smooth, continuous fashion could reduce drag, increase fuel efficiency and cut carbon emissions.

Using wind tunnel measurements and computational fluid dynamics simulations, Lawrence Livermore National Laboratory (LLNL) engineers have demonstrated that aerodynamically integrated vehicle shapes decrease body-axis drag in a crosswind, creating large negative front pressures that effectively “pull” the vehicle forward against the wind, much like a sailboat. The research appears in the Proceedings of the National Academy of Sciences.

“Future reductions in petroleum use and carbon emissions will rely heavily upon improved heavy vehicle freight efficiency,” said LLNL computer scientist Kambiz Salari, lead author of the study. “We’ve come up with a solution that would completely transform the trucking industry to become more fuel efficient while helping save the planet by cutting carbon emissions.”

“However, while these simple devices produce notable reductions in drag, substantial gains are limited by the fixed shape of modern heavy vehicles,” said LLNL engineer Jason Ortega, co-author of the paper. “A radical solution to this restriction is to completely reshape the exterior of the heavy vehicle, so that it is aerodynamically integrated along its entire length in a smooth, continuous fashion and not through an ad hoc patchwork of separate add-on devices.”

The team said the new proposed shape, which looks similar to a bullet train design, would produce body-axis drag values that are significantly less than those of modern heavy vehicles.

Although the reductions in drag come from additional frontal streamlining, manufacturers also would have to pay particular attention to the entire shape.

“For subsequent designs, aerodynamic shape optimization techniques should be employed to preserve the useful cargo volume within the aerodynamically integrated shape while minimizing the drag and addressing any possible effects upon the vehicle stability within crosswinds,” Salari said.

“The values of drag presented in this study highlight the potential to produce a significant reduction in both petroleum consumption and carbon emissions throughout the United States,” Ortega said.

The research is funded by the Department of Energy (DOE) Vehicle Technologies Program and the DOE Energy Efficient Mobility Systems Program.