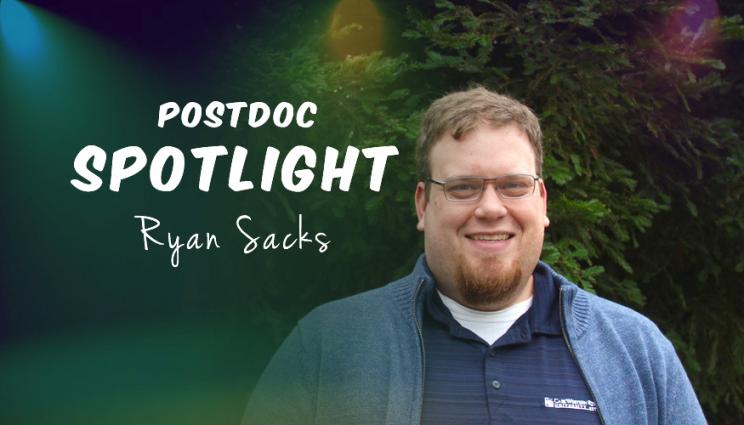 Editor's Note: This is one in a series of articles highlighting the diverse group of Lawrence Livermore National Laboratory postdocs.

The postdoc program at Lawrence Livermore National Laboratory provides opportunities for postdocs to conduct world-class research in an exciting, diverse and often interdisciplinary environment. Postdocs at the Laboratory are involved in basic science as well as applied science and technology for both research and development. Postdoctoral fellows are selected for their expertise, capability and enthusiasm for working at an institution that places a premium on scientific creativity and innovation.

Educational background: Sacks received a bachelor’s degree in physics from Case Western Reserve University, his master’s and Ph.D. in nuclear engineering from the University of Wisconsin-Madison.

Previous experience: Sacks came to LLNL after graduate schoo,l where his thesis topic focused on a collaboration with the Lab doing simulations for the Laser Inertial Fusion Energy (LIFE) reactor. Previously, he was a summer graduate scholar at the Lab and worked as an experimentalist on the Cryogenic Dark Matter Search (CDMS) and the Large Underground Xenon (LUX) dark matter project.

When did you start at the Lab?

What are you working on at the Lab?

I am engaged in research centering around mix in National Ignition Facility (NIF) capsules. I have two separate projects, the first is helping to design a new pushered single shell capsule that will be used to study the impact of mid-Z material mixing in NIF implosions. This is important if we want to design a capsule that will achieve ignition but uses heavier material, like gold or tungsten, as a part of the capsule. The second is using various mix models in the ARES code to simulate previous NIF capsule implosions and see if the work can be successfully replicated, and what it tells us about the theory behind mix.

What are you involved in at the Lab besides your research?

I am president of the Lawrence Livermore Postdoc Association (LLPA), where I have a number of different responsibilities: I organize the brown bag lunches, help get the word out about all the various programs and events that we sponsor, organize the monthly meetings and write the agenda for them, coordinate with other members of the LLPA council most notably VP Madison Martin, Kris Kulp and Christine Zachow.

Since I worked on LIFE as a graduate student, I became intensely interested in the inertial fusion work being done here at the Lab. Material mixing is something I came to late in my graduate career as we attempted to modify our 1-D code at Wisconsin to include a version of the KL model that is used widely here at the Lab to simulate mixing. Going to the annual APS Division of Plasma Physics for three years let me see what work was being done and increased my interest level. Also, my uncle works here. He encouraged me to apply for a summer position in 2010. He works over in NIF, but forgives me for being in a different directorate.

What do you enjoy most about the Lab?

I enjoy the challenging projects and collaborative atmosphere. Working as part of a group helps me feel like my efforts are valued, and everyone here is willing to help when you ask it, as long as they’re not swamped themselves. Also, the balance between work and personal life is great. Some of my friends who are still early on in their careers don’t have nearly as much freedom of hours or vacation as I do.

What have you learned since joining the Lab?

I have learned that the Lab is a huge organization and that the fusion component is only a part of the important work that is being done here. The things that they are doing with additive manufacturing are absolutely fascinating to me.

What has been your biggest accomplishment so far?

I am an Eagle Scout in the Boy Scouts of America, and I consider that an accomplishment that not many people can lay claim to.

What was your first job?

At 13, I spent the summer de-tasseling corn. Basically you ride around on baskets hanging from the arms of a tractor while it drives through the corn fields, yank out the tassels (the part that has the seed) and throw them on the ground.

Who/what inspired you to pursue a career in a STEM field?

My father has a Ph.D. in chemistry and was always encouraging my brother, sister and I to take an interest in science. He would come to our classes in elementary school and give demonstrations, including using liquid nitrogen. In high school, I took science and math courses, in the Kalamazoo Area Mathematics and Science Center, which locked in my interest in physics thanks to my junior year teacher, Mr. Sinclair. The center had a program for upperclassmen to do research with various mentors around town, and in my senior year I was lucky enough to work with Emanuel Kamber at the particle accelerator at Western Michigan University. I even presented my work at an APS meeting in 2005 as a high school student.

What do you enjoy doing in your spare time?

I play with my cat, read as many fantasy, science fiction and Roman/Greek history books as I can, play computer games with my friends, play board games with my wife, Sara, and go hiking.

I’m not quite sure, in all likelihood I see myself here at the Lab, leading a project to design a new ignition or mix experiment. There is a small chance I might be a professor at a university, but I’d rather stay at LLNL.

What book do you think everyone at the Lab should read?

"Plastic Fantastic" by Eugenie Samuel Reich. It’s a book that investigates how a researcher at Bell Labs, Jan Hendrik Schon, fabricated the results of his work to fool pretty much everyone in the scientific community. It’s an important reminder that we as scientists must hold ourselves to a high ethical standard. Here at the Lab we are counted on to ensure that the country remains safe and secure, so we must always make sure we are transparent (within reason) in our methodology and triple check our work.

What is the best movie that you’ve seen in the last year?

"The Martian." I loved the book. The movie closely followed it and was highly entertaining. But seriously, how much money have we spent saving Matt Damon?

Who are your heroes?

Jim Lovell and my father. Mr. Lovell, because his drive and dedication first as a fighter pilot and then as an astronaut showed me that if you work hard at your goals, you can achieve them. Watching the movie "Apollo 13" when I was younger and reading his book, "Lost Moon," were inspirations to me. My father is my hero because he always had time to tell me why what he was doing was important. Whether it was when he was playing a game, changing the oil in the car, building an elaborate handmade wooden desk for me or when he was doing a science experiment, he always had time for me. He showed me that attention to detail pays off and that hard work is rewarded.